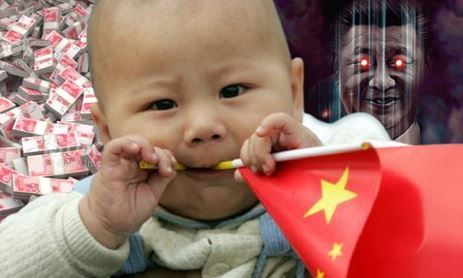 The cost of artificially altering the natural pace and shape of the population growth has had and is having a catastrophic impact on the people of China. While communist China is trying to handle the impact of its disastrous one-child policy, what damage has been done, can not be undone now. While the country is looking at imminent problems of changing sex ratios, declining marriages and speeding up of the movement away from the majority young population among many others, the Chinese Communist Party (CCP) is trying to come up with incentive plans to motivate people to have children.

With a growing demographic problem, China‘s government implemented a three-child policy last month, raising the allowable family size limit. However, because many couples are still hesitant to start a family, some regions are now providing financial incentives to encourage more births. According to the state-run tabloid Global Times, Huangzhugen hamlet in Lianjiang city in southern Guangdong province would pay permanent residents up to $510 per month for babies delivered after September 1.

In China, make a baby and earn money

Families will receive monthly subsidies until their children become two and a half years old, a total of more than $15,000 per child. According to official data, the average annual income of Lianjiang was $3,295 per person in 2019. A wealthy guy in the area gave the subsidies, which totalled several million yuan, according to the local daily ‘Zhanjiang Daily’. The three-child policy is the government’s latest attempt to boost the country’s fertility rate in the face of a rapidly ageing population and dwindling labour force. The policy change was announced two weeks after the results of the 2020 census, which revealed China‘s population was rising at its slowest rate in decades.

Also read: China lies about its population data as it wants Chinese people to believe in Jinping’s exaggerated goals

Evolution does not stop, nor can it be restricted. In the 1980s, when China introduced its one-child policy, it clamped down hard on couples having more than one child. Bearing more than one child became a crime in the communist regime. The party had inhibited control on every aspect of the Chinese citizen right down to family planning, and it worked. China’s growth rate stumbled, but it declined up to a point where it became an acute problem.

Read more: China’s three-child policy explained: If you try to control evolution, evolution will end up controlling you

In a widely expected change, China announced on Monday that married couples will be permitted to have up to three children, up from the current two-child limit. China’s one-child policy, which lasted 36 years until 2016, left the country with a demographic time bomb: falling birth rates and an ageing population. Despite the fact that Beijing officially claimed population increase in 2020, according to the Financial Times, the original census numbers showed a loss.

For the past 36 years, Chinese society evolved with the one-child policy dictating the terms of evolution. Cost of living, childbearing and education among other things were also affected exponentially. Now the CCP is feeling the ramifications and severe consequences of the one-child policy, right to disturbances in its military to the Chinese society as a whole, as the working population has declined.

With just being able to bear one child till 2016, Chinese society underwent a lot of change. It is not just the impact on the financial aspect to raise a child but also the impact on the growth of children while being the centre of attention evolved them into. Being the centre of attention and of unilateral support and care these children have been accustomed to such luxuries and it has carried out into their adult life.

The generation that has been reared during the one-child policy reign does not wish to give up its luxuries for the sake of the nation and quite rightly so. Society evolved to pander and cater to every need of these children. Now, they are being asked to suffer financial constraints and burdens for the sake of society which would not happen. Now, with all other things and plans failing to bring any tangible changes, CCP has decided to give cash for children, quite literally.

In a twist, Iran may be stepping into an era of peace with Saudi Arabia and Israel