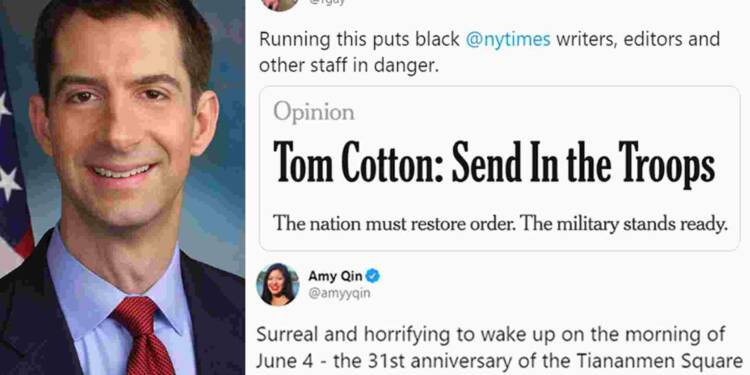 On June 3, 2020 Times published in its Op-Ed section an essay by a Republican senator from Arkansas, Tom Cotton, titled “Send the Troops.” He argued the case, richly tinged by partisan political asides, in support of US President Donald Trump’s threat to mobilize the US military against protests sparked by the police murder of George Floyd.

Times on the said Op-Ed

The Times published Cotton’s essay on a day when the country was hit by civil unrest sparked by the death of George Floyd, a black man who was killed while in police custody in Minneapolis on May 25.

It is not unusual for right-wing opinion pieces in The Times to draw criticism. This time, the outcry from readers, Times staff members, and newspaper alumni was loud enough to generate an online defense of the publication of the essay by James Bennet, the editor of the editorial page.

Bennet was editor-in-chief of The Atlantic before becoming head of the opinion department in 2016. The opinion section runs separately from the news section. Mr. Bennet informs the editor, A.G. Sulzberger, as is the newspaper’s executive editor, Dean Baquet, who is in charge of news coverage. The distinction between opinion pieces and news articles is sometimes lost for readers, who may view an opinion piece, promoted on the same home page, as just another Times article.

Also Read : The death of mainstream media in the United States

“Times Opinion in its Op-Ed section an essay by a Republican senator from Arkansas, Tom Cotton owes it to our readers by showing them counterarguments, particularly those made by people who are in a position to set policy,” Bennet wrote in a thread on Twitter. “We understand that many readers find Senator Cotton’s argument painful, even dangerous. We think that’s one of the reasons it requires public scrutiny and debate. ”

A New York Times opinion editor resigns amid staff backlash over decision to publish article as people walk on 8th Avenue in front of New York Times headquarters in New York City on March 9th, 2020. The New York Post defended its choice of publication, releasing a letter today to the editors of The Times’s opinion and news departments and to company executives. The Times’s opinion editor, James Bennet, published an article defending the publication of the Op-Ed by Tom cotton. James Bennet in a Twitter post said that the Times editorial board defended the protests as patriotic and criticized the use of force: “Today, the police responded more violently than ever before against demonstrators, journalists and bystanders.”

Also Read : Will Perdue run for the 2022 Georgia Senate Seat?

Members of the newspaper’s staff, including a Pulitzer winner, denounced an opinion essay (Op-Ed) by Tom Cotton, Republican of Arkansas, calling for a military response to the protests.

An essay by a United States senator who had aroused opposition inside and outside the newspaper: “Send the Troops.”

The op-ed, written by Tom Cotton, a Republican from Arkansas, called for the federal government to invoke the Insurrection Act, which would allow it to summon the military to quell protests in cities across the country.

“One thing above all else will restore order to our streets: an overwhelming show of force to disperse, arrest and ultimately deter lawbreakers,” Cotton wrote. In the essay, Mr. Cotton also described the looting cases in New York City as “carnivals for the rich in search of strong emotions, as well as other criminal elements” and warned that the anti-fascist “antifa” movement had broken down. infiltrated the marches.