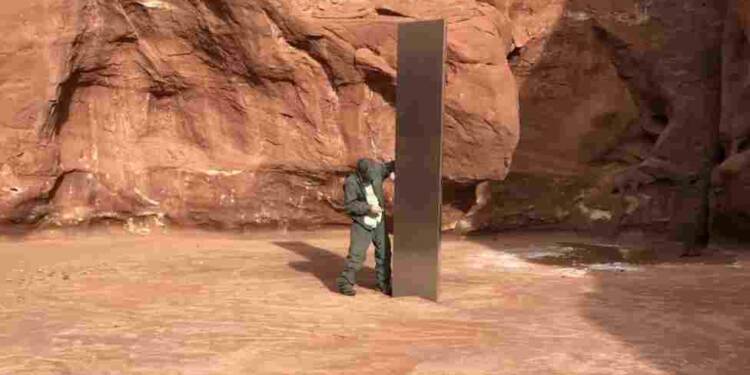 Utah Monolith – Biologists working for the Utah department of natural resources were in a helicopter surveying the local bighorn sheep population when they noticed something weird it was a three-sided 10-foot high sculpture installed in the middle of the desert a location so remote that even though the sculpture had been there for years no one had ever reported seeing it.

What Utah Monolith really is?

The Utah Monolith is a metal column located in a red sandstone canyon in northern San Juan County, Utah. It is the perfect combination of minimalism and land art, a further development of the same principles experienced by the artist Michael Heizer, who carved geometric cavities into the earth at an obscure location in the desert. The monolith is 3.4 meters high on each side and appears to be made of stainless steel.

Perplexity faced after the discovery of the Monolith

A day after the Bureau of Land Management revealed that the monolith, which had been embedded in a remote rock since November 18, had disappeared, traveling photographer Ross Bernard, who was at the site with his friend Mike Newlands, revealed that he had seen four unidentified men remove it.

The exact location was not disclosed to prevent people from locating it, in part because of the damage visitors had caused to the site. While Utah authorities did not say where the monolith was, people found it in satellite images from 2016 that determined its GPS coordinates and prompted people to wander to the site. The Utah Bureau of Land Management published a statement saying that the Utah monolith was presumably removed from its public land by an unknown party, a statement that attracted national and international attention.

Conspiracy theorists speculated that the Utah monolith was stolen by aliens, but the photographer revealed he had watched it taken by a group of men. He said he had gone to the site with three friends to take photos of the rock.

WHO removed the monolith in Utah?

Lewis Christensen, a local posted a video titled “We Removed the Utah Monolith,” claiming that he and two other people had dragged it away in a wheelbarrow. Christensen posted notes on an Instagram story in which he explained that he had deleted comments about the monolith post.

After intense media coverage, four Moab, Utah residents secretly transferred it on November 27, 2020. After nearly a month in their possession, the monolith was handed over to the Bureau of Land Management and is currently in their custody. The Monolith was carried away by a small group at night, 10 days after it was discovered by a group of state employees in the rugged rocky wilderness of Utah counting sheep from a helicopter

Lewis revealed that he and his friends donated the Utah monolith to the Bureau of Land Management to investigate its origins and find a new home for it. The following day, visitors came to a remote corner of Utah’s Canyon Country to see the monolith for themselves. Several images and videos became popular on social media as the mystery surrounding the missing monolith spread.

Theories about the Monolith created by people

-One theory is that the monolith was the work of Petechia Le Fawnhawk, a southwestern artist living and working in Utah. It was suspected that the sculpture might have been the work of Le Fawnhawk herself, who installed sculptures in desert locations during her stay in Utah, but she has stated that it was not her work.

-Part of the mystery surrounding the mysterious appearance and disappearance of the monolith in Utah does not seem to have been solved yet. One popular theory is that the Utah Monolith site was closed in 2015 as the filming location for HBO drama Westworld, suggesting it was a leftover prop or prank by members of the show’s crew.

-Another theory suggests that the monolith was an anonymous art installation at the Utah site created by an original artist, and that a number of imitators followed.