For this ceremony, the President of South Korea flew halfway around the world, but President Biden didn't even request that the event be streamed live. 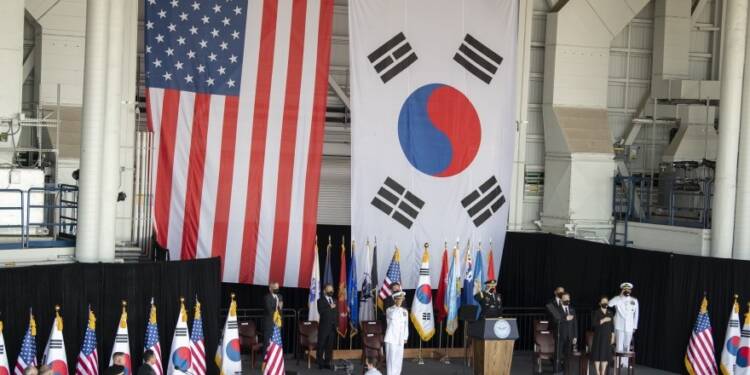 There is a limit to which one can disrespect the soldiers of a nation, that too being the President of that very country. However, Joe Biden and Kamala Harris have crossed all limits, as they missed the South Korean President’s delivery of six MIA service members’ remains, but at this important moment, both the leaders were absent. President Moon Jae-in of South Korea and his wife, Kim Jung-sook, travelled to Hawaii this week to personally deliver the remains of six US service personnel found during the Korean War.

The significance of the event should be just gauged by the fact that the remains were of the soldiers from the Korean War of mid 20th century. Since the war’s end, these men have been missing in action for 71 years. Returning dead warriors so they might be properly buried on their own soil is a holy honour for governments. As per media reports, President Moon visited Joint Base Pearl Harbor-Hickam, where a formal ceremony honouring returning service members was performed. President Joe Biden and other high-ranking White House officials were noticeably absent.

Also read: Biden has almost dropped South Korea into China’s lap and if the US doesn’t act, China will control the entire peninsula

Although Pentagon did send an admiral – Admiral John Aquilino, to accept the delivery, the President didn’t think it was worth his time to show up for it.

Joe Biden is known for his amateurish policy decisions, and his handling of the Eastern alliance together goes a long way to show the same. As per a recent NYT report, a quiet arms race is building up between Pyongyang and Seoul. And we cannot help but blame the Biden administration for creating this crisis by refusing to continue Donald Trump’s policy to engage North Korean Supreme Leader Kim Jong-Un in a serious dialogue. Also, the Biden administration’s attempts to give China a central role in the North Korea negotiations, have aggravated the Korean crisis.

Read more: After turning the Russia-Ukraine border into a warzone, Biden brings Korean Peninsula to the brink of a big war

As per NYT, South Korea exhibited military muscle by unveiling its own supersonic fighter jet KF-21, which has been developed at a cost of $7.8 billion. Recently, Seoul also disclosed plans to acquire dozens of new American combat helicopters. On the other hand, Pyongyang keeps showing its nuclear power. While South Korea lacks nuclear weapons, it is augmenting its strength in conventional weapons by procuring American stealth jets and building powerful conventional missiles that can target North Korean missile facilities and bunkers.

“After a 70-year wait, American and Korean heroes are finally going home to their families,” Moon Jae-in remarked during the ceremony. This was the first-ever combined repatriation ceremony held at the base. For this ceremony, the President of South Korea flew halfway around the world, but President Biden didn’t even request that the event be streamed live. South Korea has been a strong ally since the end of the war, and 30,000 US troops remain in the nation to ensure that North Korea does not attempt an invasion. However, Joe Biden seems to not care about these things at all and by his ill-informed actions he is making sure to lose an ally in the East.
Tags: Joe BidenKamala HarrisShort takesSouth KoreaUnited States of America
ShareTweetSend
Previous Post