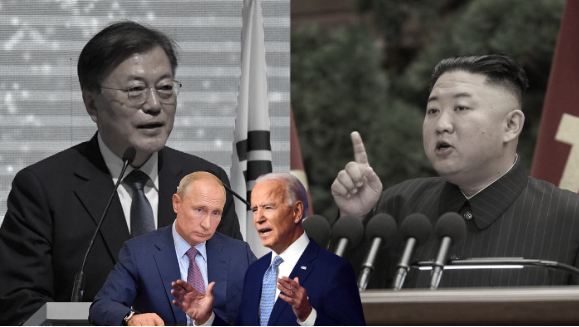 Do you remember how Biden used to run vicious propaganda against Vladimir Putin, by calling him a “killer” and making him look like a threat to world peace? But when it comes to the Korean Peninsula, it is Putin who seems to be pushing the region towards peace and stability while Biden plays spoilsport.

Long story cut short- South Korea wanted to establish peace with North Korea with assistance from the US. However, Biden has a policy of not speaking to North Korea’s Supreme Leader Kim Jong-un. So, Seoul decided to take Russia’s assistance for engaging North Korea. Russia started helping Seoul, but then Biden stepped in and the US announced a major military drill with South Korea. Now, North Korea is upset and Putin’s Korean peace plan has got sabotaged.

Last month, Russia’s efforts in the Korean Peninsula bore fruit, as the two Koreas announced a surprise thaw in their bilateral ties. Both the countries opened all kinds of communication lines between each other after close to a year of no official contact. The opening of all communication lines – including military and political liaison came after the leaders of two Koreas, Moon Jae-in and Kim Jong-un exchanged letters with each other recently, underscoring the importance of peace and stability in their peninsula.

As a part of his strategy to ensure peace and stability in North Korea, Putin was also sidelining China in the Korean Peninsula. North Korea used to function as China’s client state and issue threats to Japan, South Korea and the United States on China’s behalf.

However, growing Russian influence was ensuring that Pyongyang was able to cut dependence on China and ultimately, Pyongyang would have stopped acting as a Chinese proxy. In fact, Kim Jong-un reportedly rejected the use of the Chinese vaccines for its vaccination drive. North Korea is reported to be hopeful of receiving Russia’s Sputnik vaccine for free in the coming days.

Clearly, a waning Chinese influence in North Korea and a growing Russian influence facilitated a temporary thaw in the Korean Peninsula. This was being widely seen as a possible precursor to the long process of Korean reunification, which would conclusively end the long history of tensions and conflict in the Peninsula.

Putin’s success in enabling better ties between the two Koreas was directly or indirectly a major embarrassment for Joe Biden. The incumbent US President is a dogmatic, rigid and stubborn man, who completely lacks the ability to make quick diplomatic manoeuvres. In the case of the Korean Peninsula, he works with a preconceived notion that a US President cannot talk to Kim Jong-un.

Even during his election campaign trail, Biden declared that he would not meet Kim Jong-un without preconditions and accused Trump of emboldening the North Korean leader. Biden, therefore, had an express agenda of derailing Trump’s Korea initiative.

Had it not been for Putin, the entire Korean Peninsula would have landed in China’s lap. However, Biden couldn’t tolerate Putin’s successful peace initiative in the region. So, the US decided to play spoilsport and announced a military exercise with South Korea that is expected to take place from August 16 to 26. South Korea and the US began preliminary training on Tuesday.

Pyongyang seems really upset and agitated by the latest announcement. Kim Yo Jong, the sister of North Korea’s Supreme Leader, issued an angry statement calling the US-South Korea exercises an “act of self-destruction for which a dear price should be paid as they threaten the safety of our people and further imperil the situation on the Korean peninsula.”

She added, “They are the most vivid expression of the US hostile policy towards [North Korea], designed to stifle our state by force.” Kim didn’t stop here and insinuated South Korea of indulging in “perfidious behaviour”, before warning that North Korea would step up its efforts to bolster pre-emptive strike capabilities. She said that she had been delegated authority to make the said statement, which suggests that Kim Jong-un has himself slammed South Korea.

Russia’s efforts had led to the establishment of military and liaison hotlines between the two Koreas. However, North Korea is miffed and hasn’t been answering South Korea’s phone calls via the newly established hotlines. The reaction in North Korea dashes all hopes of re-establishment of a joint liaison office between the two Koreas, which was blown up by Pyongyang last year.

As for South Korea, it did not really have much of an option. When you form an alliance with a global power like the US, you cannot really say no if the US wants to hold a military drill with you. In any case, Seoul has lost the opportunity to establish lasting peace with North Korea. The Korean Peninsula is itself becoming the venue of a great power competition between the global powers and this is exactly what is keeping the region deprived of peace, stability and security.