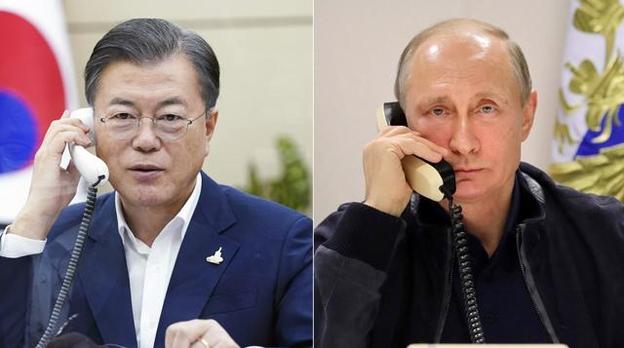 With anti-China sentiment rising among the public at a breakneck pace and a President retiring from public service next year, South Korea is having to rethink its foreign policy outlook and alliances dramatically. President Moon Jae-in has been a disappointment for quite some time now, entirely due to his inability to see through China’s devious plans for the Korean peninsula and instead let the trade and monetary figures get the better of him. But he is retiring next year, and a new President will assume control of the crucial country.

Russia is ready for the change.

To be fair, South Korea is walking a diplomatic tightrope in trying to balance out its relations with both the United States and China. As for dealing with the U.S. under President Joe Biden, South Korea has a pretty good idea of how the new administration and occupants of the White House can blow up the Korean Peninsula with their disastrous moves, statements and policies. Take for instance North Korea’s renewed missile tests – which came soon after the new administration took charge of the United States. In March, Kim ordered his country’s first short-range ballistic missile tests in a year.

So, South Korea knows that it cannot count on the Biden administration to bring peace to the Korean Peninsula. Can it count on China?

North Korea is China’s vassal state – which means that much of the mess the Korean peninsula finds itself today in is the doing of China. Therefore, to expect the paper dragon to resolve the crisis would be infantile, to say the least. Additionally, South Korea has borne the brunt of China’s temper and haphazard sense of slapping economic sanctions on ROK for no fault of its.

Now pray to tell, which power could bring stability to South Korea?

That power would be Russia.

And Russia knows this is its moment of glory in the Korean peninsula. Moscow is slowly but surely making diplomatic gains in the critical peninsula, much to the dismay of both China as well as the Biden administration. With its renewed and enthusiastic diplomatic push towards South Korea, Russia is pulling out Seoul from America’s arms and definitely getting it away from China’s lap.

According to the East Asia Forum, Russia is reengaging with the Korean Peninsula after its normally active diplomacy in the area came to a screeching halt in 2020, and South Korea is the primary object of attention amid North Korea’s self-imposed isolation. But that does not mean Russia and North Korea do not have occasional exchanges, but that’s a story to tell at a different time.

Right now, what is of significance is the fact that a recent succession of visits from high-ranking Russian officials to Seoul underscores the Kremlin’s diplomatic offensive. First, in March it was Russian Foreign Minister Sergei Lavrov.

Then, the Russian and South Korean vice defence ministers also met in Seoul, where they inked an agreement on bilateral defence cooperation and resolved to collaborate on denuclearising the Korean Peninsula. Importantly, during Sergei’s visit, Russia and South Korea even discussed the possibility of Russian President Vladimir Putin making a state visit to Seoul.

This sort of diplomatic push by Russia in the Korean peninsula is unprecedented, to say the least, and is in line with the emerging trends in South Korea. Seoul is increasingly getting wary of the feasibility of its alliance with the United States. Presently, at a political level at least, South Korea wants to remain in the good books of China. Due to tremendous domestic pressure against China, however, Moon Jae-in is forced to cave in from time to time.

Russia’s entry into the equation at such a time is a masterstroke and gives South Korea a third pillar, which is non-American and non-Chinese, to rely on. The United States is not a net security provider for the Korean peninsula. As for China, it tried to obliterate South Korea’s economy after the United States supplied ROK with THAAD missile systems. So that wound is still fresh in South Korean memory.

Russia, therefore, becomes the only viable power with which South Korea must expand its partnership and cooperation. Meanwhile, by getting involved to such a degree in the Korean peninsula, Vladimir Putin’s message to Xi Jinping too is loud and clear: Try too hard to eat into Russian spheres of influence, and Moscow will end up encircling you from all sides.