Trump was healing the Korean Peninsula, then came Biden. Now North Korea is back to where it was 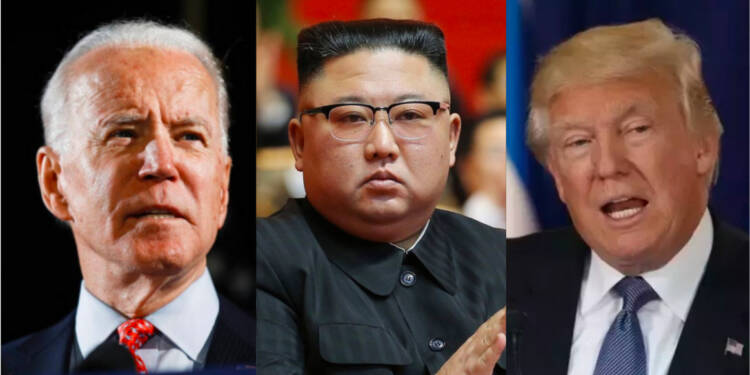 North Korea is least interested in talking to the Biden Administration, which is why it has been ignoring the United States for over a month now. The same was revealed by a senior official from within the Biden administration, who said that Pyongyang has not been responding to behind-the-scenes diplomatic outreach since mid-February by President Joe Biden’s administration, including Pyongyang’s mission to the United Nations. It must be remembered that Biden, during his campaign last year, had called the North Korean supreme leader a ‘thug,’ who he would meet only if Pyongyang committed to denuclearising itself.

As such, Biden played his cards out even before becoming President. Now, Kim Jong-un knows that talking to the United States for the next four years at least, is fruitless, as a mindless Biden will go on and on about how North Korea must denuclearise itself. Contrary to Trump, who was more focused on bringing peace to the Korean peninsula before making up his mood of what he wanted Pyongyang to do, Biden has predetermined conditions, which Kim is not agreeing to.

As such, North Korea is ignoring America. Make no mistake, a nuclear-armed Pyongyang is a threat to the world community. However, Joe Biden, unlike a diplomat wanting to achieve something good, has from the word go let his ego cloud his judgement. This has not resonated well with North Korea, which in any case had China aiding it covertly. Kim is perfectly okay with being Xi Jinping’s lapdog, while Beijing continues providing all necessary help to North Korea secretly.

Unlike Biden, Donald Trump tried to change this dynamic. North Korea is not willingly playing the part of being China’s vassal state. In fact, global isolation has led it to make a disastrous choice. Trump tried to offer a new life to North Korea and worked towards achieving the unification of the Korean peninsula, after which it would most naturally be denuclearised as well.

Read more: Donald Trump was silently bridging the gap between North and South Korea. The world just got to know about it

The Trump administration had a Korea strategy. Joe Biden, being the slow man that he is, still has a Korea policy that is weeks away from being finalised. Under Biden, the US is looking to engage with North Korea as if it is some sort of a lesser country, fit to be thrown around like a rag doll and subservient enough to be dictated. That influence, however, is currently being exercised by China, and Kim Jong-un is in no mood to have another master puppeteering him.

North Korean leader Kim Jong-un and Donald Trump agreed to work towards the denuclearisation of the Korean peninsula at their first summit in 2018 but a second summit and subsequent working-level talks fell apart. However, it was a good ice-breaker and led to considerable contact and communication between North and South Korea. This also jeopardised the monopoly China had vis-a-vis North Korea and weakened its position as the channel of communication between the western democracies and the North Koreans.

South Korea, meanwhile, is clear on its mandate – the USA under Joe Biden must strictly follow Trump’s North Korea policy because it most definitely will. Pyongyang, meanwhile, to put it simply, is no longer taking the US seriously, which is why it is not reverting to the backchannel talk attempts being put forward by the Biden administration.