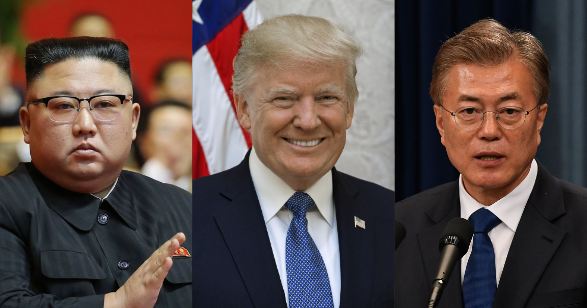 Great leaders do not consider their petty political gains. They look towards the greater good of the humankind at large. While Trump with his path-breaking peace talks with the North Korean leader Kim Jong-un, made consistent efforts to find an amicable solution, Joe Biden seems more inclined towards demonising the North Korean regime and lambasting it with sanctions. However, this will be disastrous for the region in the long run. South Korea, on the other hand, had made it clear that it will not welcome any change in the Trump era foreign policy approach.

As per a Reuters report, South Korea’s point man on North Korea said on Wednesday that the United States should flexibly enforce sanctions aimed at curbing Pyongyang’s nuclear programmes to revive denuclearisation talks.

Lee In-young, South Korea’s unification minister, in charge of inter-Korean affairs, said that reinforcing sanctions may not be the key to bringing North Korea back to the table. And the reason cannot be clearer.

North Korean leader Kim Jong-un and Donald Trump agreed to work towards the denuclearisation of the Korean peninsula at their first summit in 2018 but a second summit and subsequent working-level talks fell apart.

South Korea’s President Moon Jae-in, for quite some time, is making it known to Biden that Seoul would continue to follow Trump’s policy and as an ally, would expect the USA to do the same.

Recently, Moon even asked Biden to hold dialogue with North Korea and build upon the progress made by Trump and Kim in their first meeting in Singapore. In their Singapore meeting, Kim and Trump had agreed to foster new relations and work towards denuclearisation of the Korean Peninsula.

On the other hand, the North Koreans have understood the change in the US foreign policy and have again gone back to their old ways. Pyongyang is making it amply clear to the rest of the world that it is ready to help it contain China, provided that North Korea is allowed to remain a nuclear power.

Kim vowed to bolster his country’s nuclear deterrence during a ruling party meeting. At the same time, he spoke about fixing North Korea’s economy. Kim Yo Jong- the North Korean Supreme Leader’s influential sister has been demoted following her unruly remarks about South Korea. However, as the Biden administration tries to undo the efforts of Trump, North Korea will most likely go back into China’s lap.

Read more: ‘Accept our nuclear status and we will move away from China,’ North Korea delivers a clear message to the world.

The Trump administration was exemplary in solving long-standing issues in different regions of the world. Be it the Middle East and Abraham Accords, or the very slowly, yet to some extent improving ties among the South Koreans, Japanese and the North Koreans.

However, all these things are being undone to feed Joe Biden’s ego. This will destabilise the region, which was recently stabilised and the US will lose long-standing allies in these regions.

The South Korean leadership already seems frustrated with the new Biden administration, which is trying to implement the Obama era failed policy vis-a-vis North Korea and undoing all the positive developments that South Korea had made.