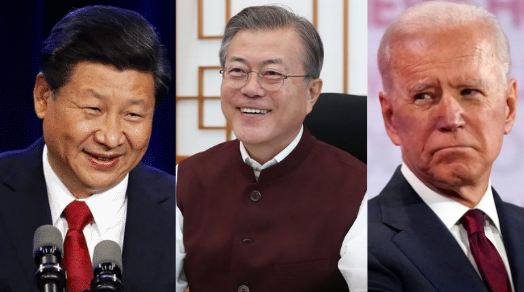 Joe Biden’s foreign policy has been the worst thing that has happened to the USA, which otherwise had the most well thought out geopolitical approach. Because of such policy paralysis, the USA is losing its allies. In the latest, South Korea’s foreign minister said on Saturday he expects China to play a role in peacemaking between South and North Korea, inviting China’s president to visit as the United States and its allies agreed to continue pushing Pyongyang to denuclearise.

The USA has been losing allies at godspeed, and to make things worse, China is actively making the most out of it. If the foreign policy debacle in the Middle East was not enough, the Biden administration’s inability to keep the flock together has led to South Korea almost ending up in China’s lap. South Korea has been pushing the USA to follow on Trump-era North Korea policy, however, it is falling on deaf ears.

The point to be noted here is that South Korea, frustrated with the inaction by the Biden administration, has become more welcoming of China. Chung Eui-Yong was quoted as saying by South Korean news agency Yonhap, “South Korea and China share a common goal toward complete denuclearisation of the Korean Peninsula and toward permanent peacemaking policies.”

Xi Jinping and the Chinese Communist Party are observing the best possible foreign policy developments for Beijing. The Chinese were expecting the world would come raining down on them, as soon as the pandemic fades away. But on the contrary, the policies of Joe Biden are giving Beijing more and more legroom to increase its influence in its neighbourhood and beyond. Recently, China’s state broadcaster China Central Television (CCTV) had announced in February that it has signed a strategic partnership in programme development and online video with South Korean public broadcaster KBS.

Read more: Joe Biden is giving China the best opportunity to try and pull USA’s ally South Korea to its side

The move was a strong indication of an attempt to ease the tensions between the two countries that have, for years, left Korean content unofficially banned in the mainland. The move is an obvious shift in the Chinese policy towards South Korea. With the absence of the USA in East Asia and Joe Biden going back to the Obama era policy of isolating North Korea, China has found the best opportunity to placate Seoul and from the looks of it, South Korea is responding positively.

Chung met on Saturday with State Councillor Wang Yi, the Chinese government’s top diplomat, in the Chinese city of Xiamen, as part of the first visit of a South Korean foreign minister to China since 2017. Chung’s visit comes as Seoul seeks to mend ties with its biggest trading partner. A 2016 row over a U.S. antimissile system placed in South Korea hit the country’s tourism, cosmetics and entertainment industries.

These developments signal the intent of South Korea to take up China on its offer and make geopolitical realignments in the face of an inconsiderate USA.

China took a huge gamble when it decided to orchestrate a coup in Myanmar. Now it has completely backfired