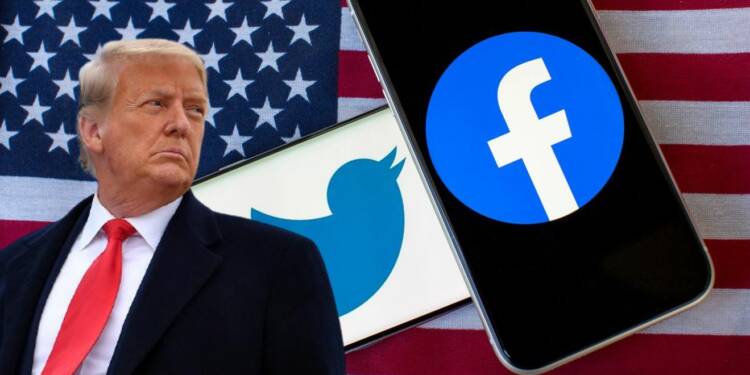 Former President Donald Trump is readying himself. He wants to run for President again, and that will not be a pleasant exercise unless he reins in Big Tech, which has shown a ludicrous amount of bias towards him by trampling his democratic rights to free speech and expression, leading to his de-platforming by the likes of Twitter and Facebook in January this year. Now, Donald Trump is going full throttle to extract his pound of flesh, and Big Tech has been slapped in the face with a fresh lawsuit in which the former president has made some very pertinent arguments.

Donald Trump on Friday filed a complaint in the US District Court for the Southern District of Florida. In his complaint, Trump asked the court to direct Twitter to temporarily restore his account while he pushes forward with efforts toward permanent reinstatement. Trump argued that the platform that served as his main megaphone for reaching his millions of conservative followers was “coerced” into suspending him by members of the US Congress.

Twitter, the filing argues, “exercises a degree of power and control over political discourse in this country that is immeasurable, historically unprecedented, and profoundly dangerous to open democratic debate.” Much to Big Tech’s dismay, Trump seized the opportunity to expose the likes of Twitter for their duplicitous hypocrisy. Donald Trump argued in his filing that Twitter had allowed the Taliban to tweet regularly but censored him. The suit notes that the Taliban, in power in Afghanistan now and still considered a terrorist organization by the United States, is allowed to have a Twitter account.

Despite the fact that the Taliban’s Twitter account came up during its invasion of Afghanistan when it was waging military conquests in one province after the other, the microblogging site failed to act against it and continues to allow the terror organisation to operate on the social media platform freely. Banning Trump but not the Taliban amounts to “ludicrous incongruity” on the part of Twitter, the suit alleges.

Big Tech To be Reined in If Trump Wins Another Presidency

Donald Trump is planning to come back to the White House in 2024, and his primary agenda is clear. The biggest threat facing America, or dare we say, global freedom is undoubtedly Big Tech and left-leaning social media companies like Facebook and Twitter. A few months ago, Nigeria deleted Twitter indefinitely, after the left-leaning microblogging platform decided to mess with the African nation’s President. Twitter is now banned in Nigeria – in a move that has shown the world how such platforms need to be put in their place.

In a move that laid out Trump’s future plans for Big Tech, he lauded Nigeria and said, “Congratulations to the country of Nigeria, who just banned Twitter because they banned their President…More COUNTRIES should ban Twitter and Facebook for not allowing free and open speech—all voices should be heard.”

Read more: ‘Should have done it when I had the chance,’ Trump laments about not reining in the big tech and assures action in the next term

The former president’s attack on Twitter didn’t just end there. In fact, he made his future intentions very clear, as he said, “In the meantime, competitors will emerge and take hold. Who are they to dictate good and evil if they themselves are evil? Perhaps I should have done it while I was President. But Zuckerberg kept calling me and coming to the White House for dinner telling me how great I was. 2024?”

A Trump administration 2.0 after 2024 would really ring the death knell of Big Tech companies and their ambitions of global digital colonialism. Needless to say, Trump hardly has any fondness for such hegemons, and he will come cracking down hard on the likes of Facebook and Twitter for their brazen practices which most often result in the silencing of conservative voices and opinions.

Make no mistake, the banning of Donald Trump after the January 6 Capitol riot was a mere ruse. The mainstream media in the USA has been a lapdog of the Democratic party for a while. Propounding progressive ideals, the MSM has been censoring the conservatives for a long time. Big Tech’s final blow came in January when it decided to counter Trump, the biggest opposition against the Democrats. What Facebook, Google and Twitter did was nothing short of a full-blown campaign to silence the voice of a sitting American President. Trump is keen to get back on Big Tech and make their lives miserable.