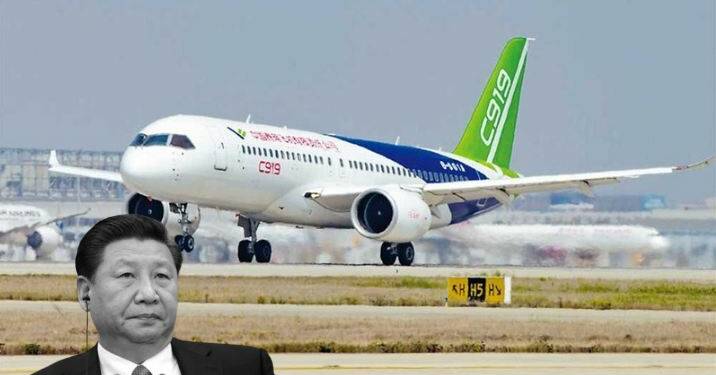 China’s indigenous aviation industry has crashed in a catastrophic manner. And it once again exposes how lack of talent, innovation and dependence on Western technologies can hamper all of China’s big plans, apart from crashing its huge manufacturing sector.

China follows the expansionist dream of controlling the entire world. In fact, it also wants to control your mode of travel. In 2008, the Communist nation even announced a plan to create a passenger jet to rival US-based Boeing and Europe-based Airbus.

Presently, most of the world travels either in a Boeing or an Airbus aircraft. However, a Chinese state-owned aerospace manufacturer, Commercial Aircraft Corp of China, also called COMAC, is presently manufacturing the C919 jetliner to take on the Boeing 737 and the Airbus A320.

A COMAC sales executive said, “Boeing and Airbus alone will not be enough to meet demand.” The official added, “The new option we’ll provide will be in the interest of the airlines.”

The C919 jetliner is supposed to be delivered to its first client by the end of this year. The deadline is coming closer, yet the Chinese indigenous aircraft shows no signs of development in the near future.

The C919 jetliner did not make an appearance at the Airshow China in Zhuhai on Thursday. COMAC neither carried out a performance demonstration of the jetliner nor did it unveil an actual plane at the event. In order to make up for its abrupt absence, COMAC decided to display a life-size model of the cabin.

COMAC is facing a lot of turbulence in its operations. Out of 39 main suppliers for the C919 jetliner, around 40 per cent are based in the United States of America or other countries outside China. Chinese companies are supplying the fuselage and the wings, but other critical components like the communication and flight control systems are being supplied by overseas firms.

In fact, even the engine required to power the C919 jetliner is manufactured by CFM International, a joint venture between the US-based General Electric and France’s Safran Aircraft Engines. Meanwhile, the CJ1000 jet engine being produced by a Chinese aerospace firm that COMAC wants to adopt isn’t going to be a commercially viable option before 2030.

Engines are to aircraft what semiconductors are to electronics. The geopolitical confrontation and trade friction between the US and China has already led to Washington, D.C. cutting off semiconductors supply to China that hampered the Chinese smartphone manufacturing industry profoundly. Now, Beijing fears that the West might also weaponise China’s dependence on foreign technology for jet engines.

There are already some signs of the US attacking the Chinese aerospace industry. The Aviation Industry Corporation of China, also called Avic, which is a key supplier for the C919 jetliner and the third-largest shareholder of COMAC, has also got caught in between Beijing and Washington.

In December 2020, seven of Avic subsidiaries were put on the US Commerce Department’s list of companies with alleged military links. They are subjected to a licensing requirement for certain sensitive equipment in line with the US export control regulations. This is, of course, creating a problem of supply chain issues for Avic and COMAC.

Till now, Avic and its subsidiaries were dependent on overseas aviation-related assets and technology. However, the deteriorating ties between the US and China are bound to hurt China’s aviation dreams sooner or later, which will ultimately trigger the downfall of the leading Chinese aviation companies.

The US and European regulators set certification standards that many other countries follow. This allows Airbus and Boeing to manufacture aircraft for the entire world.

The Chinese regulators too have laid down an approval process. However, China doesn’t have much influence in the global aviation industry. This means that any passenger aircraft produced by China would be able to fly only within China and its export prospects will not be too bright. As such the C919 jetliner cannot really emerge as a global competitor against Boeing 737 and Airbus A320.

Meanwhile, the US and Europe are also burying the hatchet in the aviation industry on issues like aircraft subsidies. The American and European interests understand that China’s entry into the aerospace sector is a threat to their hegemony, and this is why they are resolving their differences which ultimately closes any space for Beijing to exploit.

China does have the option of banking upon its large land-mass, heavy population and growing air travel market. However, if China tries to get protectionist for its aircraft manufacturers, the European and American governments could hit back at the Communist nation by cutting down supplies of key components to the Chinese aviation industry.

China’s aviation industry has thus crashed even before it took off, thereby exposing the vulnerable character of the Chinese economy.

Evergrande has collapsed, the next is BRI