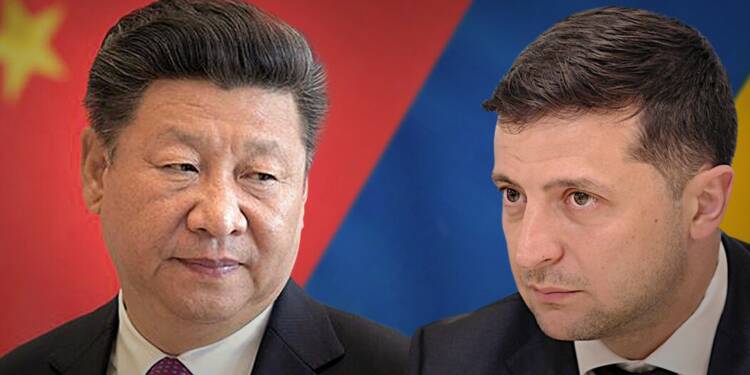 Looking at Chinese President Xi Jinping, you can only say one thing- the man is trying too hard but he will never get what he wants. In a bid to replace the US, Xi is now trying to woo Ukraine, a country that was used by Biden for firing up anti-Putin propaganda and abandoned later. However, Ukraine is only using China for the trade without giving away any leverage to the Communist nation whatsoever. In the process, Ukraine is sending its message across to the US but not antagonizing Russia entirely.

As soon as Biden came to power, he tried to use Ukraine for vilifying Russia and its President Vladimir Putin. However, after achieving his political objectives, Biden backed off. Ukraine, on the other hand, is desperately trying to win the United States of America’s steadfast support in order to achieve its own geopolitical objectives against Russia.

As such, Ukraine has no other option because even European powers like France and Germany aren’t ready to take on Russia. By moving ahead with the Nord Stream 2 gas pipeline project which bypasses Ukraine, Germany further made it clear that it doesn’t care much about Ukrainian interests.

Yet, Biden’s constant refusal to rally behind Ukraine in its escalating conflict with Russia left Kyiv irritated. China wanted to feed upon this feeling of abandonment in Kyiv. In June, it was reported that Beijing used vaccine diplomacy to persuade Kyiv into withdrawing itself from a united request for Beijing to provide the UN human rights chief access to Xinjiang.

When Ukraine did withdraw, the Chinese Foreign Ministry seemed to admire Ukraine and stated that Kyiv’s decision “reflects its spirit of independence and respect for facts and conforms to the purposes of the UN Charter and basic norms governing international relations”.

In a clear attempt to drive a wedge between the US and Ukraine, the Chinese Foreign Ministry added, “The moves of a few Western countries to interfere in China’s internal affairs, suppress and contain China and hinder China’s development under the pretext of human rights are unavailing.”

So, China managed to coerce Ukraine into withdrawing itself from a united statement on Xinjiang. If Ukraine hadn’t withdrawn, China would have probably cancelled the delivery of 500,000 doses of the COVID-19 SinoVac vaccine to the European country. So, Beijing is resorting to its well-known intimidation tactics. But does Chinese coercion mean that Ukraine has become a Chinese crony?

Well, Ukrainian Foreign Minister Dmytro Kuleba’s remarks suggest otherwise. Kuleba said, “China is not an enemy, not a friend, but just a trading partner”. So, it basically means that China doesn’t form the core of Ukraine’s foreign policy, no matter how hard Xi Jinping may be trying his luck in Kyiv.

The fact remains that Ukraine feels sidelined in the global economy because EU powers like Germany are ready to undermine Ukraine’s interests in order to procure Russian natural gas. China is Ukraine’s biggest trade partner with bilateral trade reaching $15.4 billion. At $7.1 billion, 14.5 per cent of Ukraine’s exports go to China.

Ukraine wants to keep its exports economy alive, a pragmatic relationship allows it to do so. But that’s it. Ukraine has no intention of forming an alliance or even a strategic partnership with China. The Ukrainian political leadership has drawn limits on cooperation with China. Things aren’t moving beyond trade and investments, leaving strategic sectors like 5G networks and critical infrastructure facilities beyond China’s reach.

Ukraine is well aware of the risks associated with deep cooperation with China. It must have observed how South Asian countries like Sri Lanka and Pakistan got embroiled in debt traps because they opened doors to deep Chinese involvement.

Criticism of China is also growing within the Ukrainian intelligentsia after Beijing attempted to acquire Ukrainian engine manufacturer Motor Sich. China wanted to acquire the engine manufacturer in order to access sensitive military technologies for producing aircraft engines. People in Ukraine thus realised how China was trying to bolster its own position in the Indo-Pacific at the expense of Ukraine’s security interests.

Ukraine is using China as a bargaining chip against the US

When China launched the Ukrainian-language version of Xi Jinping’s The Governance of China in Kyiv, the event was attended by many Ukrainian politicians. David Arahamia, head of Ukraine’s ruling Servant of the People party recently told Chinese media that Ukraine wants to learn a lot from the Chinese Communist Party (CCP) in terms of economy and government.

The speaker of the Ukrainian delegation in the Trilateral Contact Group, Oleksiy Arestovich, virtually warned, “If the West wants to make friends with Russia at the cost of surrendering Ukrainian interests or a significant part of them, then we will turn to the East and thus rebalance our position.”

So, Ukraine’s strategy is clear. It is using ambiguity in its relationship with China as a bargaining tool with the US and the EU. In fact, Kyiv is loud and clear- give us entry into the EU and NATO or we will get closer to China.