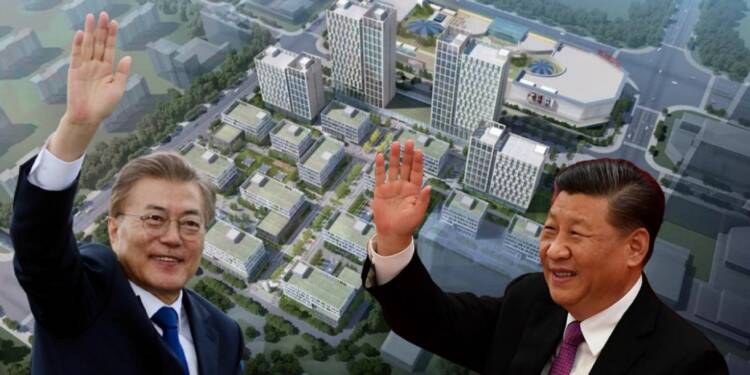 Any country which has a political system also has business groups with their interests and politicians representing their interests in places of decision making. Similar is the case in South Korea, and as the recent years have seen clear partisanship and opinion about an alliance with the US is also becoming a political Faultline. The development of a new China-Korea semiconductor manufacturing complex has begun in response to Beijing’s quest for technological self-sufficiency. The China-Korea Integrated Circuit Industrial Park is being developed by the Wuxi municipal government and memory chip manufacturer SK Hynix.

19 new semiconductor-related projects with a total investment of US$4.7 billion are projected to be built in the city. The fact that the development is speeding up at a time when the possibility of an anti-China conservative government coming to power is high, means that the company in question wants to hasten the project before the new possible conservative government may introduce hindrances. As South Korea’s presidential election in March 2022 approaches, candidates from both the ruling and opposition parties are competing over their programmes on a variety of hot-button subjects and boosting their chances of being the country’s next president.

Wuxi, a city in eastern Jiangsu province, has collaborated with SK Hynix, a South Korean memory chip company, to create the China-Korea Integrated Circuit Industrial Park, as part of Beijing’s push to develop a sophisticated and self-sufficient semiconductor supply chain in the country. According to a Wuxi government announcement on Thursday, construction on the new industrial park has begun, with a total investment of 2 billion yuan (US$310 million).

Wuxi Lead Intelligent Equipment Co – a company primarily involved in the research and development, design, production, and sales of automation equipment – has invested 10 billion yuan in an advanced manufacturing research institute focusing on integrated circuits (ICs) and new energy equipment as one of these projects. In the next few years, the city of Wuxi, located northwest of Shanghai, is slated to become home to 19 new semiconductor-related projects.

Since 2006, SK Hynix has operated a wholly-owned fabrication unit in Wuxi, where it has been manufacturing memory chips. In April 2019, the company finished expanding its fab for dynamic random-access memory chips.

The construction of a new IC industrial park in Wuxi underlines Beijing’s sustained significant investment in semiconductor-related programmes, as it seeks to strengthen the country’s self-reliance in the face of a heated tech rivalry between China and the US, as well as a global chip scarcity.

The nature of these candidates’ foreign policy is one of the most pressing questions that the South Korean public has for them. The businesses are also understanding the development and the possibilities going ahead. This is why now one will observe the companies who had bet on China and were using the soft stance of the progressives under Moon Jae-in to increase their businesses and invest into China are trying to complete the process, given the conservatives, who are most likely to come may put hindrance and punish them for putting business interests over natural interests.

A recent poll cited by the diplomat revealed a significant shift in the public image of neighbouring countries in South Korea, which could influence presidential contenders’ foreign policy objectives. According to a poll conducted by Hankook Research and the South Korean online publication SisaIn, the South Korean people has the lowest opinion of China, with only North Korea and Japan rated higher.

On a scale of 0 to 100, participants were asked to rate the favourability of four countries: China, Japan, North Korea, and the United States. China received the lowest average score of 26.4 from South Koreans, while the United States received the highest score of 57.3. Furthermore, when asked whether a country is “good” or “evil,” 58.1 per cent of participants claimed China is “evil,” while only 4.5 per cent said it is “good.”

Youth against China: a new trend

South Korea is at the cusp of a generational change, and it might come as a huge shock to China. Presently, Seoul and Beijing enjoy good business ties, despite Chinese belligerence against South Korea. But Koreans are changing and their policies towards Beijing are also bound to change. The youngsters in South Korea are protesting against what Koreans call the “86 generation”. This is indicative of the time period of this generation- “8” implies the 1980s when this generation was in college and “6” implies the 1960s, the decade of its birth.

Read more: Young South Koreans are increasingly turning hateful of the older generation, and it is bad news for China

South Korean politics is showing glimpses of change. In June, 36-year-old Lee Jun-seok defeated four-time lawmaker Na Kyung-won in the conservative opposition’s primary polls to elect its next leader. This was quite literally the victory of younger South Koreans over the “86 generation.”

This is where China also comes into the picture. Lee Jun-seok is just 36 and also a declared China hawk. Lee represents the young generation of South Korea and its intensely deep anti-China sentiment. Speaking to Bloomberg, the 36-year-old leader of South Korea’s biggest opposition party said his fellow millennials will push back against Chinese “cruelty” in places like Hong Kong, indicating a tougher line with Beijing if his political group regains power.

The history of failures tells a pessimistic tale

While these pro-China companies might try to hasten their partnership with the Chinese Communist Party, but going ahead, with the world taking a different turn, their fortunes will soon evaporate and the conservatives which are most likely to come to power, will not make their companies less vulnerable.