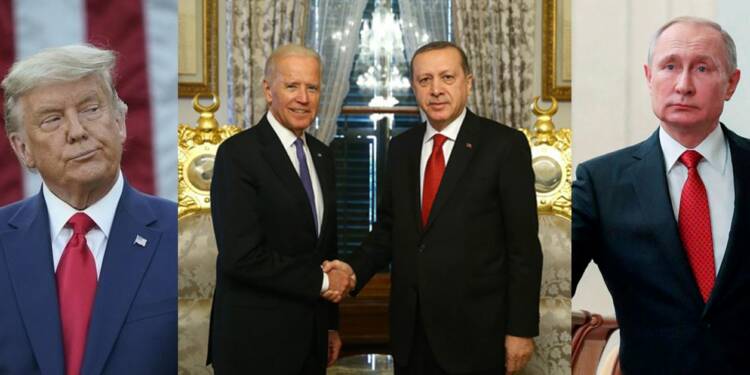 Recently, the Joe Biden administration “encouraged” Turkish President Recep Tayyip Erdoğan to modernize Turkey’s fleet of F-16 fighter jets. But wait! Isn’t Turkey subjected to the CAATSA sanctions imposed by the former Trump administration? The $2.5 billion S-400 deal between Turkey and Russia was the contentious issue that led to the collapse of the American-Turkish partnership and the exclusion of Turkey from America’s F-35 fighter jet program.

But Biden is looking ready and willing to obliterate all the CAATSA sanctions imposed by the previous administration. Not only is the US now ready to modernize Turkey’s F-16 fleet, but it also looks well poised to bolster the bilateral security ties. Undoubtedly, this accounts as a major strategic victory for the Turkish President, who lost no time in sending a “letter of request” to the American president. As per media reports, Turkey expressed its intentions of purchasing 40 new F-16s and 80 modernization kits through the letter.

Biden’s generosity doesn’t end here. Biden may also seek to run a campaign in the US Congress to convince the lawmakers towards making concessions to Ankara. Given Ankara’s subjection to the CAATSA sanctions, Congress’ approval is a must, given the size of the proposed deal—a whopping $6 billion. The Turkish officials are vehemently hopeful of the deal, who believe that “the whole process is progressing fast and that the administration of US President Joe Biden has no issues with the request to update the F-16s.”

The Russia angle to Biden’s prostration before Ankara

But why would Biden shower his largesse over the Turkish regime that Biden views as an authoritarian and suppressive one? The answer to this question lies in Moscow.

After the American-Turkish fallout over the S-400 deal in 2019, Moscow jumped in to fill the vacuum. It emerged as a reliable source for Ankara to modernize its security apparatus. Hence, while the US was pressing Ankara to relinquish its S-400 dreams, it went ahead to sign more defence contracts with Moscow.

As per a defence news article, Turkey has pledged to further its defence industry cooperation with Russia, including fighter jet and aircraft engine technologies, the second batch of S-400 air defence systems, and submarines. Erdogan sees Russia as a source to strengthen its security infrastructure, along with a counterbalance to the escalating pressure from Washington. Defence deals with Russia come with no strings attached and help Turkey keep the US from meddling in its internal affairs.

Turkey is an important NATO ally that hosts several NATO military bases and is geologically best placed to deter any Russian threat posed to the American allies originating from the Black Sea. Hence, growing stronger ties between Russia and a NATO ally like Turkey is naturally an alarming signal for the US. The security ties between Ankara and Moscow are viewed in the US as a manifestation of the fact that Turkey is shifting its allegiance away from the West towards Russia.

Will Biden make concessions on the F-35 fighter jets issue?

Make no mistake, Biden hates Erdogan from the core of his heart. Joe Biden despises Erdogan for his “Autocratic” regime and his dangerous consolidation of power over the last few years. In an interview with New York Times, Biden once said that “the US should seek his ouster by backing Erdogan’s opponents. He has to pay a price.”  So, when Biden came at the helm in January this year, Erdogan knew he had to brace for a rockier relationship with the US for the next four years. So, out of anxiety and precariousness, Erdogan tilted his foreign policy towards Russia to balance the USA’s aggression.

Read More: Putin’s masterclass in its full glory as he uses Erdogan as a pawn to irk Biden

As Biden’s recent moves indicate, Erdogan’s Putin card is more than enough to tame his aggression. The way Biden is going all out to subdue America’s interests in his bid to undermine Putin’s influence over Ankara, he could even submit to Erdogan’s demands of Turkey’s re-entrance into the F-35 fighter jet program. Only the time will tell how far Biden will go to stop the Russian advancements in the Middle East.