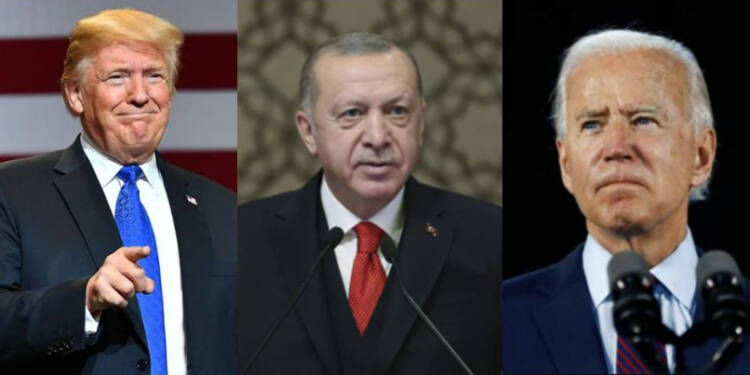 The Islamist regime of Recep Tayyip Erdogan is reeling under the pressure of recent sanctions imposed by the Donald Trump administration over its purchase of the S-400 missile system from Russia. After observing a radio silence on the developments, the  President of Turkey has finally given a reaction to the levied sanctions and it might be fair to assume that Erdogan is manic with Trump and looking for newer pastures, say, in an anti-Turkey Biden. But that is the case with adversity, it makes people do things, they would have otherwise detested from doing.

During one of the televised addresses, Erdogan rained fury on America and used big, democratic words like sovereign rights to put forth his point.

“What kind of alliance is this? What kind of partnership is this? This decision is an open hostile attack on our country’s sovereign rights,” said Erdogan in the televised address.

The radical leader further went on his rant and targeted the US of blocking Turkey’s advancements in the military arena. “The real goal is to block the advances our country started in the defence industry recently and to once again render us absolutely dependent on them (United States),” added Erdogan.

The use of the term ‘sovereign rights’ coming from Erdogan is funny, to say the least as the leader of Ankara during his tumultuous regime has created unrest across continents by poking his finger in foreign countries and their internal issues.

Turkey has established its image as an Islamist belligerent fuelling conflict across the already volatile regions of the South Caucasus, where Azerbaijan and Armenia have crossed swords, to the Gulf and Eastern Mediterranean.

Reported a few days back by TFI, American President Donald Trump brought the sledgehammer on Erdogan’s unattainable dream of recreating the glory of the Ottoman empireand quashed them to pieces. The US Treasury on Monday targeted Turkey’s defence procurement agency, known as the ‘Presidency of Defense Industries’, and its senior officials, including its President, and imposed sanctions on it for buying the S-400 missile system from Russia.

Read more: ‘They were asking for it, they got it,’ Trump finally imposes brutal sanctions on Turkey and Erdogan did not see it coming

However, it seems as if Erdogan is batting for liberal media President-elect Joe Biden by foul mouthing Trump and his administration. The irrational optimism from the Turkish Prez can surely come back to haunt him as the issue of Turkey is one of the few common points where Democrats and Republicans seemingly agree. Analysts have suggested that Biden is expected to take a tough stance on Turkey, if and when he comes to the White House.

Sensing a sanction dangling over Turkey’s head, the madmen leader Erdogan tried a last-ditch attempt to woo the Americans. Turkey selected a new ambassador to send to Israel after Ankara recalled its envoy in 2018 over the killing of Palestinians in the Gaza Strip at the hands of Israeli forces. However, after the ploy failed to bear any fruits, Erdogan went back on his rhetoric and targeted the Trump administration.