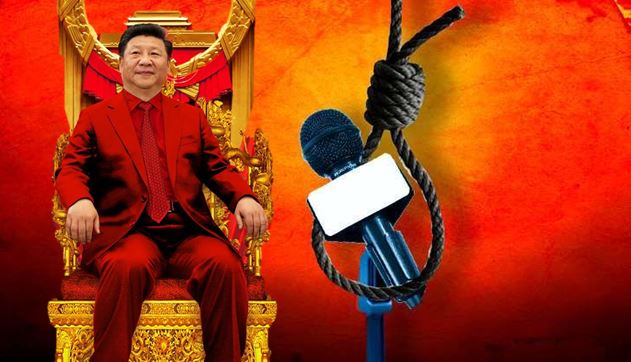 The plethora of western media outlets which have time and again been caught promoting the Chinese Communist Party’s propaganda do not shy away in showing their love for the communist nation. But now, in a situation that some might consider an example of poetic justice, Beijing is turning all foreign media outlets into illegal entities overnight, a tale of tragic yet much-deserved karma. Late Friday, China released a proposal that bolstered its intention to reduce private capital’s influence over a wide spectrum of media operations.

According to a public consultation paper released on the website of China’s top economic planner, the National Development and Reform Commission, private capital would be excluded from news gathering and distribution operations. Private investments in the formation and operation of news sources, such as news agencies, newspaper publishers, and broadcasters, would also be prohibited. They will also be prohibited from reproducing news items produced by international news organisations. This comes at a time when all these media channels and larger enterprises were busy helping push the narrative of the CCP.

China has not only shown how careless it is in managing the spread of an extremely dangerous virus, but throughout the pandemic, it has tried to shift the onus on other countries and run away from its responsibilities. However, even with all the negatives, the Chinese Communist Party’s control of the global media and thus the global narrative factory, it was able to whitewash the dirt which itself inflicted upon itself. The control of the CCP on the international and western media is a widely known fact, and it is this control that has helped Beijing by becoming its laundry and cleaning every speck of dirt on it.

A new report published in May by the International Federation of Journalists (IFJ), which Julia Bergin co-authored with Louisa Lim of the University of Melbourne and Johan Lidberg of Monash University, has found Beijing’s global image has benefited from the pandemic, despite its origin in the Chinese city of Wuhan. Over half of the 50 nations surveyed at the end of 2020 reported that coverage of China had become more positive in their national media since the onset of the pandemic, while less than a quarter reported that it had become increasingly negative.

At TFI Global, we have discussed the depth of the influence CCP exercises on the American media, and in its backdrop, it is not difficult to understand how pro-CCP the media houses from other places would be. Ties between the Chinese Communist Party (CCP) and major American media houses, being brought to the fore, have ceased to surprise anyone of late. It is an open secret that the CCP funnels money into the pockets of American media outlets via its own state media houses to get paid content, pro-China in bias, published as editorial commentary.

The tragedy of the 21st century is that the media houses of the USA are turning into the enablers of communist China’s propaganda. The pieces of evidence have been increasing, be it the Hunter Biden emails and his links to the CCP or how the Wuhan Coronavirus was covered. The beacon of a free press which the USA was, has become compromised. The mainstream media giants in the USA have become complicit in Chinese propaganda. These big media companies have forgotten the ethics and morals of being information propagators for the Chinese Yuan. And the more unfortunate fact is that it is not just American media, but the situation is comparable the world over.

China has long attempted to seed positive narratives of itself in foreign media while blocking unfavourable coverage and redirecting the world’s attention onto Western failures. To do so, Beijing uses customised offers of access and tools to tap into foreign media ecosystems. It uses content-sharing agreements and memorandums of understanding with state-sponsored media outlets like Xinhua and China Daily to export its propaganda to foreign media organisations. For example, ANSA, Italy’s state-run news agency, now publishes 50 Xinhua stories per day on its news wire, with Xinhua handling the editorial material.

The details that confirm much deserved backstabs to foreign media outlets

Private investments in the formation and operation of news sources, such as news agencies, newspaper publishers, and broadcasters, would also be prohibited. They will also be prohibited from reproducing news items produced by international news organisations. This is the latest salvo in China’s wide regulatory crackdown on enterprises in fields such as ride-hailing, e-commerce, and after-school tutoring that began earlier this year. Concerns about global inflation and interest rates, geopolitical tensions, how new laws will transform enterprises, and where Beijing might strike next have all contributed to a 16 per cent drop in the MSCI China Index this year.

The proposed bans are part of a larger document that includes discusses barriers to entry in other industries such as finance, the internet, and agriculture. The seven-day public consultation will expire on October 14. This is the most impeccable example of the saying what goes around comes back around. The international media houses are being chased away by the very people whom they loyally served.