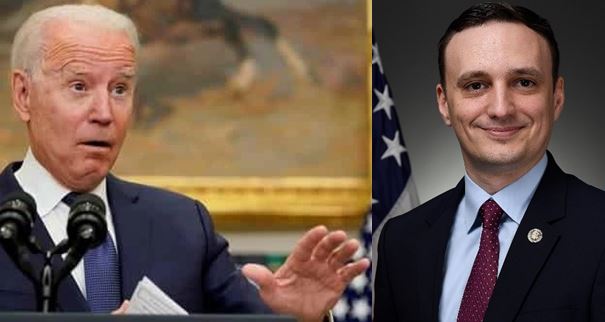 Resignation of Nicolas Chaillan : The US under Joe Biden has degraded a lot in an astonishingly short period of time. While the loyal mainstream media has tried to whitewash all the absurdities, the resignation of a top man from the US Air Force must have had a significant impact on the people of the USA. According to the Financial Times, China has defeated the United States in the artificial intelligence race and is on its way to worldwide dominance as a result of its technological breakthroughs.

According to Western intelligence assessments, China, the world’s second-largest economy, is projected to dominate many major emerging technologies, including artificial intelligence, synthetic biology, and genetics, within a decade or two. Nicolas Chaillan, the Pentagon’s first chief software officer, resigned in protest over the military’s delayed technological change, saying that the failure to adapt was putting the country at risk.

Also read: China is a dirty, dirty cloth and global media is its laundry

Nicolas Chaillan, the Air Force’s first top software officer, will retire in October, according to FCW. His last day was set for October 2. In a resignation memo acquired by FCW, Chaillan stated, “We are the largest software organisation on the planet, and we have essentially no shared repositories and little to no collaboration across DOD Services.”

He predicted that China would dominate the world’s future, dominating everything from media narratives to geopolitics. Sluggish innovation, a reluctance of US businesses such as Google to collaborate with the government on AI, and substantial ethical disputes about the technology were all criticised by Nicolas Chaillan. Outside of business hours, Google could not be reached for comment.

Also read: Biden called up Jinping and assured him that the US will respect the “One China Policy”

According to Chaillan, Chinese corporations are obligated to work with their government and are investing ‘massively’ in AI without concern for ethics. Nicolas Chaillan resigned in early September, claiming that military officials were routinely put in charge of cyber efforts for which they lacked knowledge. He claimed that some government ministries’ cyber defences were “kindergarten level.”

Nicolas Chaillan joined the Air Force in 2018 with the goal of establishing DevSecOps as a normal business practice and expanding the Kessel Run software factory model across the service. The work was “perhaps the most demanding and irritating” of his entire career, but it was also “impactful” and “rewarding,” he said. Chaillan’s team has notably assisted in the establishment of Platform One, which intends to make it easier for businesses to develop software factories and to release trustworthy code to warfighters using certified technologies since joining the Air Force tech leadership. Chaillan’s group was also responsible for the Kubernetes migration to the F-16 combat jet. He worked as a lead on the Department of Defense’s enterprise DevSecOps effort and a cloud security advisor to the undersecretary of defence for acquisition and sustainment in the Office of the Secretary of Defense before becoming the Air Force CSO.

In the document, Chaillan stated that his office and mission were “unable to fix basic IT issues” due to a lack of resources and DOD bureaucracy. The software head specifically mentioned his recent assignment of assisting the Joint Chiefs of Staff with Joint All Domain Command and Control, a DOD-wide effort to ensure data can be exchanged easily across platforms. Nicolas Chaillan previously stated in an interview with FCW that technical training and education in areas such as cloud security were also a challenge.