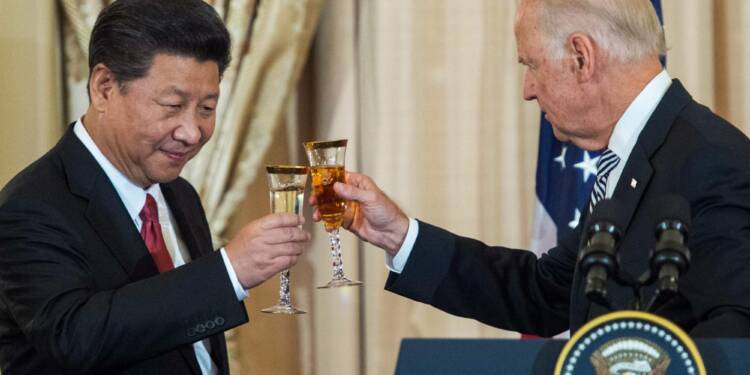 Joe Biden and Chinese despot Xi Jinping seem to be best buddies who are on a first-name basis with each other. What else justifies this astronomical statement by Joe Biden, the commander-in-chief of the world’s most powerful military? Biden, after a call with Xi Jinping on Tuesday, said, “I’ve spoken with Xi about Taiwan. We agree, we’ll abide by the Taiwan agreement.” Biden added, “We made it clear that I don’t think he should be doing anything other than abiding by the Taiwan agreement.” But here’s the mind-blowing part. There is no “Taiwan agreement” between the United States of America and China. It is simply a figment of Biden’s old imagination.

Biden appeared to be referring to Washington’s long-standing policy under which it officially recognizes Beijing rather than Taipei, and the Taiwan Relations Act. But then there’s a big and well-known catch here. China claims Taiwan as an estranged province of itself, which will be reunited with the mainland by force, if necessary. So far, the US has maintained a policy of “strategic ambiguity” with respect to the question of whether it would militarily intervene in favour of Taiwan in case China launches an offensive against the sovereign island nation. Well, Biden has become the first American president to toss that ambiguity out of the park.

Essentially, what Biden meant by the “Taiwan agreement” was that he had promised Xi Jinping that his administration would comply by the ‘One China Policy’ of Beijing, and do nothing to hurt the Communist nation’s goals. Taiwan’s Foreign Ministry said it had sought clarification from the United States about Biden’s comments, and was reassured that US policy towards Taiwan had not changed, the US commitment to them was “rock solid” and that the US will continue to help Taiwan maintain its defences.

However, the damage has been done. Biden seems to have agreed in toto with Xi to uphold the One China Policy, and that simply goes in complete contravention of Taiwan’s trust in Washington. Taiwan has reported 148 Chinese air force planes in the southern and south-western part of its air-defence zone over a four-day period beginning Friday. According to Taiwan’s defence minister Chiu Kuo-cheng, “By 2025, China will bring the cost and attrition to its lowest. It has the capacity now, but it will not start a war easily, having to take many other things into consideration.”

So, Biden’s comments in favour of the One China Policy come at a time when Taiwan is claiming that hostilities between it and China are at a 40-year high.

Having Betrayed Taiwan, Biden Rushes to Fix Ties with China

White House national security adviser Jake Sullivan held talks with senior Chinese foreign policy adviser Yang Jiechi in Switzerland on Wednesday. South China Morning Post quoted an official familiar with the arrangements for the Zurich meeting as saying the objective is “to rebuild communication channels and implement consensus reached” between Xi and Biden. Another important issue to figure prominently in the talks was said to be that of trade.

So, while China is launching unprecedented air violations of Taiwan’s airspace, Joe Biden is actually discussing furtherance of trade ties between Washington and Beijing. Needless to say, the message from the Biden administration has been received lock, stock and barrel by Taiwan.

As reported by Nikkei Asia, the Biden administration is preparing to resume talks with Beijing over a variety of issues, but most importantly on trade. US Trade Representative Katherine Tai said on Monday, “I expect to have honest conversations with my counterpart in China in the coming days.” She is due to speak with Chinese Vice Premier Liu He, urging him to honour the “phase one” trade agreement that China struck with the US under former President Donald Trump. To assist mitigate the impact of trade tensions on its domestic economy, the US plans to reinstate partial exemptions from punitive tariffs.

Evidently, the United States, under the inept leadership of Joe Biden is trying to placate China while leaving Taiwan hanging out to dry. As reported by The Epoch Times, the Pentagon has recently determined that the US might be defeated and certainly would suffer heavy losses of personnel and equipment, should the US forces come to the defence of Taiwan. The military experts in the US are also growing wary of the fact that the USA’s aircraft carriers deployed in the region could also become an easy target for Chinese missiles fired from long distances.

Yet, instead of making up for the power imbalance which only threatens to worsen with time, Joe Biden is trying to woo China. As a direct consequence of the same, an emboldened China is brazenly carrying out the largest ever incursion in the Taiwanese airspace with 56 of its advanced fighter jets.

Joe Biden has only worsened Taiwan’s woes by bending the knee before China. By committing to the One China Policy under the masquerade of a supposed “Taiwan Agreement”, Biden has caused more harm to Taiwan and the Indo-Pacific at large than any other American president.