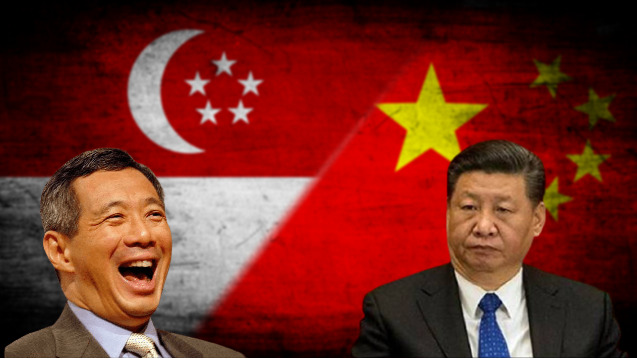 Singapore is the richest ASEAN nation, and given its importance as well as its small size, it has to try to balance great power rivalry for its survival. However, while it has played a neutral position in the current geopolitical environment, in recent months, it has shifted away from its traditional role of a good friend of China to now a pragmatic and realpolitik powerhouse of South East Asia. In the latest development, while China claimed that Singapore supported its entry into CPTPP, the statement by Singapore made no mention of the same.

The Chinese Foreign Ministry announced on Friday that Singapore has welcomed China’s application to join the CPTPP trade deal. The Singaporean Foreign Ministry, on the other hand, did not mention any talks about the CPTPP in their statement. By doing so they laid bare the arrogant attitude the CCP holds and, they have also denied Beijing any success it could have had by using the name of Singapore. In a phone call with Chinese President Xi Jinping on the same day, Singaporean Prime Minister Lee Hsien Loong said that Singapore “welcomes and supports” China’s application to join the Comprehensive and Progressive Agreement for Trans-Pacific Partnership, which “will benefit the prosperity and development of the region,” according to a Chinese statement.

The agreement and the Taiwan factor

The CPTPP, commonly known as the TPP-11, is a Comprehensive and Progressive Agreement for Trans-Pacific Partnership. Australia, Brunei, Canada, Chile, Japan, Malaysia, Mexico, New Zealand, Peru, Singapore, and Vietnam are among the 11 countries that have signed the multilateral regional free trade agreement. What’s more, Taiwan has submitted its application to join the TPP-11 less than a week later.

Read more: China out, Taiwan almost in: Japan and Australia are running TPP like a boss

Taiwanese officials applied to New Zealand, which serves as the Pacific Rim Trade Pact’s depositary, and asked for support from all existing members.

Due to China’s opposition, Taiwan is having a difficult time becoming a member of international organisations. China considers Taiwan to be part of its territory. Taiwan, on the other hand, has pulled a quick one on China with its application to join the TPP-11, which is also in the process of becoming a member of the coveted trade bloc.

Australia To Not Allow China’s Entry into TPP

Australia is putting its weight behind Taiwan’s entry into the TPP, which makes it a natural opponent of China’s bid to join the trade pact. Australia’s trade minister, Dan Tehan, says Australia will oppose China’s bid to join a key trade pact until it halts trade strikes against Australian exports and resumes minister-to-minister contacts with the Morrison government. The Guardian quoted the Australian trade minister saying that China could not join until it convinced members of its “track ­record of compliance” with existing trade agreements and World Trade Organisation commitments.

Earlier, as reported by TFI, China was lobbying Australia to support its bid to join the TPP. China has been trying to woo Australia for quite some time now, despite waging a trade war against it. And now as the chances are becoming slimmer, Beijing is trying to force statements out of influential countries like Singapore.

Some of the prerequisites to join the TPP are labour protection, environmental issues, and state subsidies. Taiwan ranked sixth in the world in the Heritage Foundation’s 2021 Index of Economic Freedom; while China was a far-off 107th. So, purely based on merit, Taiwan qualifies to join the TPP, while China fares pretty bad.

Furthermore, to ensure equal competition, the bloc forbids preferential treatment for state-owned companies — partially a response to the global surplus of steel and other goods caused by aggressive capital spending by Chinese state-owned producers. It would also be a tough pill for China to prohibit compulsory source-code disclosures.

Currently, Japan is the chair of the organisation, and Singapore is going to be the next. In such a scenario, the actions by Beijing to force a statement out of Singapore PM means they are desperate. While there is no doubt in the number of efforts Japan is putting, we cannot discount this quite destruction of China’s bid for entry into CPTPP.