Shuli has taken a dig at Xi Jinping in the most figurative of ways- a food and life section article on Caixin about pig heads. 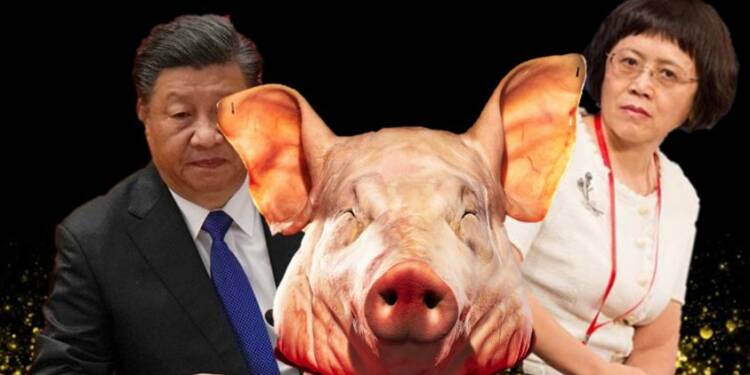 Xi Jinping is falling prey to his own crackdowns on senior Chinese officials. After coming to power, Xi had started purging officials close to his rivals within the CCP like former Presidents Hu Jintao and Jiang Zemin and ran a widespread anti-corruption campaign that targeted anyone whom the Chinese President perceived to be a threat.

In comes Hu Shuli, a ‘dangerous woman’ who is known in China to predict the downfall of high-ranking Chinese officials. As the founder and publisher of Caixin, a reputed media portal in China, Hu Shuli used to disclose big targets of a brutal anti-corruption campaign in China ran by President Xi Jinping and Vice President Wang Qishan. Consider this- if Hu said something nasty about a Chinese official or exposed him on her portal, the official was done and dusted. This is how dangerous she is. In fact, she is described as ‘the most dangerous woman in China.’

Now, Hu has predicted the downfall of a very high-ranking Chinese official- President Xi Jinping himself. Of course, the woman hasn’t directly said that Xi is going to get nailed, but she has suggested his downfall in the most figurative of ways- a food and life section article on Caixin about pig heads.

Vice President Wang Qishan was made in charge of the CCP’s internal anti-corruption body. Wang himself had a special relationship with Hu Shuli, founder and publisher of Caixin, a reputed media portal in China. Hu literally became a voice of the crackdown- she would point out officials who would later get purged. Now, Xi and Wang apparently had a fallout between themselves and Hu has pointed to a new target- Xi Jinping. The interesting bit here is that all is not well between Vice President Wang Qishan and Xi Jinping and Jinping is going after state banks and other financial institutions, in a bid to downsize his lieutenant, Vice President Wang Qishan, who has a strong power base in China’s financial sector.

If you are a Chinese official, you wouldn’t want to mess with Hu Shuli. She can literally expose you and risk you to great personal harm. You really don’t want to end up featuring on her media portal, as it could spell your exit from the CCP and lead to perhaps even worse consequences like hefty fines and a long jail term.

Hu is quite influential and resourceful too. When the Xi-Wang anti-corruption campaign was going on, she had more insider information than even the State-owned Chinese media on questions like who was being targeted, who would be the next target, and what kind of punishments would be meted out.

What has Hu said about Xi Jinping and pig heads?

Earlier this month, Caixin published a story featuring pictures of several pig heads in the food and life section of Caixin media. She said, “If the pig’s heads are cooked well, they are quite delicious. The pig’s head is not well received nowadays because of people’s notions. With such a bad reputation, who would want to establish a strategic partnership with pig’s heads at the dinner table?”

Does it sound vague? Well, yes it is. The pig heads have a Xi connection. If you search Pig Head Xi in Chinese, you will get some morphed images of Xi with a pig’s head.

People in China aren’t allowed to criticise their President because of lack of democratic freedoms. So, Xi’s dissidents use such indirect ways to slam him. Pig head seems to be a code language in China to suggest that Xi is an imprudent man.

So, Hu seems to be suggesting that Xi is stupid and incompetent. By stating that no one would want to establish a strategic partnership with Xi, the Caixin founder seems to be suggesting that no international leader wants to befriend the Chinese President due to his diplomatically unsavoury behaviour. She is also talking about “people’s notions” about pigheads which is again suggestive of the growing dissatisfaction in China with Xi Jinping.

Xi’s media ban may be targeted against Caixin

Xi has recently announced a sweeping ban on private Chinese media, robbing the non-State-owned media enterprises of whatever freedoms they still enjoyed. An entire list of what private individuals cannot do has been prepared by the Xi administration:

Its quite clear that Xi wants to kill whatever private media still functions in China. For many, such actions are targeted against Jack Ma and South China Morning Post, a reputed newspaper based out of Hong Kong, which was taken over by Alibaba Group in 2015. However, the pigheads post on Caixin media actually suggests Xi wants to settle scores with Hu Shuli and the sweeping media ban in China may be actually targeted against Caixin.

It is quite clear that ‘the most dangerous woman in China’ has predicted Xi’s downfall. However, who is really orchestrating Xi’s perceived downfall?

In all likelihood, Wang Qishan, the Chinese Vice President, seems to be the man behind Xi’s downfall. Qishan enjoys close ties with Caixin founder Hu Shuli. In fact, Shuli is dangerous because she has Qishan’s backing.

Moreover, Wang Qishan has had a political fallout with Xi only recently. Xi has been cracking down on financial institutions and targeting senior executives of the Chinese financial sector who are considered close to the Vice President. In fact, Qishan owes his influence and power in China to the Communist nation’s financial institutions and the State-owned China Construction Bank Corp., which Qishan headed in the 1990s.

Qishan would be quite unhappy with the way Xi is downsizing him. In fact, Xi is literally looking to mount trouble on Wang Qishan and take him down ultimayely. Yet, Qishan is fighting back by fuelling discontent against Xi and also suggesting that the Chinese President is about to get nailed. Hu Shuli meanwhile has become a medium to predict Xi’s downfall.