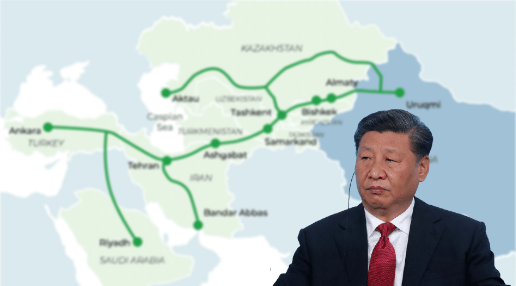 The Carnegie Endowment report focuses on how the nature of Chinese economic operations changing in Central Asia. China’s main investment strategy in the Central Asian Republics of Kyrgyzstan, Kazakhstan, Uzbekistan, Tajikistan and Turkmenistan revolves around the Belt and Road Initiative (BRI). Which was characterised by colossal international transport projects with a major debt component.However, Central Asia is no longer allowing China to make it a pawn of China’s geopolitical ambitions. Also, Central Asia is seeking the development of its indigenous industries.

How China was trying to swallow Central Asia:

Central Asia has traditionally been a part of Russia’s privileged sphere of influence. There was a time when the US was able to expand its impact in the region. However, the US influence in the landlocked region was short-lived and did not survive because of Russia’s Soviet-era alliance with the region.

China, on the other hand, perceives Central Asia as a pivotal part of its strategy to eat into Russia’s sphere of influence. This is why BRI investments were rolled out in the region ever since the infrastructure project was launched by Beijing in the year 2013.

As a part of its domination strategy, Chinese FDI in the five Central Asian countries stood at 14.7 billion US dollars, that is, 1.2 per cent of Beijing’s total investments in Asia by 2018.

Kazakhstan, the biggest Central Asian economy, even got labelled as the “buckle” of Beijing’s BRI. Apart from Kazakhstan, Kyrgyzstan and Tajikistan already owe a bulk of their foreign debt to China. Meanwhile, Turkmenistan too, is economically dependent on Beijing, as China purchases 80 per cent of its total gas exports.

It is not as if Central Asia is a land of ignorants. The governments in the region do realise what China is doing to their economies. The popular opinion of China has been growing hostile for quite some time.

A sceptical Central Asia is now demanding the De-Chinafication of the BRI for obvious reasons. As per the Carnegie Endowment for International Peace, “Large-scale transport and electricity projects funded by Chinese government loans have dried up.” It added, “Instead, there are a growing number of industrial projects that seek to make value-added products that can be exported. These projects are increasingly staffed by Central Asians who receive technical training from Chinese firms.”

So, what is changing the composition of Chinese BRI investments in Central Asia? The international think tank explains, “This change has been primarily driven by Central Asian states. The region’s governments have long pushed for industrial capacity building, including the upskilling of local workers. In addition, debt concerns in Kyrgyzstan in particular have made Chinese loans less attractive and less prevalent. This trend has coincided with Chinese policy banks’ embrace of more conservative lending policies globally for infrastructure projects.”

Beijing would, of course, be agonised by the changing market conditions in Central Asia. These circumstances are not favourable for China to invasively invest in the strategically crucial region. Yet, Chinese businesses are usually motivated by prospects of profit-making and not by Beijing’s geopolitical motives.

The Carnegie Endowment has stated, ‘Chinese firms have begun adapting to these demands. They have steadily increased their proportions of local hires by training Central Asian workers both onsite and in China to address skills shortages. They have tried to engage local communities to earn a social license for their overseas operations.”

The think-tank added, “The Chinese government is now following suit. It is developing more formal cooperation agreements on industrialization and upskilling in addition to pre-existing, ad-hoc arrangements by individual companies.”

The BRI is not just an investment program. It is the centrepiece of Xi’s foreign policy. By cutting down China’s role in BRI investments themselves, Central Asia has dealt a huge setback to the Communist nation.