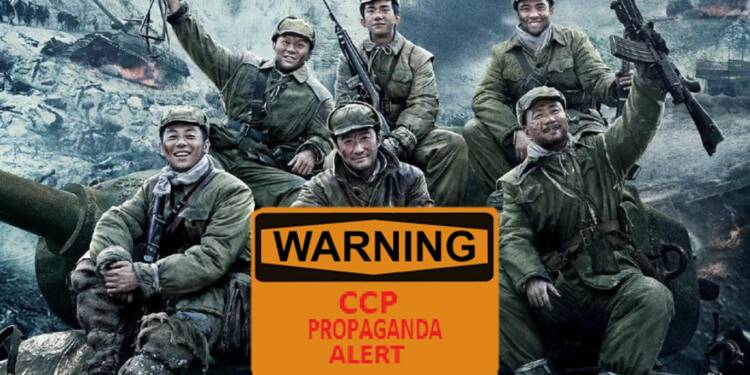 While last year Chinese Communist Party was able to raise temperatures with its neighbouring countries to prop up nationalistic emotions. However, this time things are so messed up and CCP is so cash-starved that they cannot even afford that travesty. Now it has gone back to its old habit of using propaganda to reignite its population’s nationalism. The Battle at Lake Changjin, a Propaganda movie that aims to shore up the support for the PLA among the Chinese, is filling theatres and breaking box office records.

The Battle at Lake Changjin, a Propaganda movie, which takes place on the Korean Peninsula during the horrific 1950-53 Korean War, is expected to be the highest-grossing film of 2021. However, the film has been widely panned in South Korea, heightening the chance that it will not find a local distributor. To many South Koreans, the film is yet another propaganda effort replete with historical misinterpretations, financed by the Chinese government to arouse stronger patriotic feelings among the country’s youth.

The people, as well as the very top and elite echelons of society, are expressing this new perspective on war. As a result, “military fanboys” have emerged as a new type of online influencer. Going to war has been a recurrent theme in China’s state-backed publications, which is another indicator of the shifting perspective. The Chinese people and their leaders, according to the editor-in-chief of the state-run Global Times, feel that “there is no possibility that we can communicate to the US with reason; we can only talk to the US with strength and acts.” This is a shift in perspective that enhances the likelihood of conflict.

While the catalyst for this shift in view is debatable, there is little doubt that it has occurred. The willingness to go to war is now depicted as a sign of pride and self-assurance. This can only be reasoned by the fact that, before the next party congress, Xi Jinping wants to garner enough support among the PLA and the people so that he can have a smooth ride to power for life.

The CCP tries to instil pride in the face of China’s humiliating history, leading to the idea that going to war is no longer seen as negative by the public or elites. Even in the face of territorial victories, Chinese troop fatalities were considered as a fool’s errand. Now, the inverse is true. China’s might and power are now symbolised through territorial battles. Engaging in war will no longer weaken the Chinese Communist Party’s authority, whether owing to a new economic normal or the next step in national rejuvenation. Instead, it has the potential to strengthen its position as the world’s most populated country.

The Chinese economy has started unwinding. And the worst is yet to come. The China bulls have a lot to answer for, and so do those who did not shift their production and manufacturing facilities out of the Communist nation when the time was ripe last year. As the Covid-19 pandemic took grip over the entire world and manufacturers sought to dissociate from China, some shied away from doing the same. Now, the sinking Chinese ship is taking down these China doves as well, and the unwinding of the Chinese economy is having a global impact and is also taking a toll on domestic consumers and prospective flyers. In such a situation, China found it convenient to use propaganda to defuse the fire that is instigating among the populace as they face increasing hardships under the leadership of a paranoid Xi Jinping.

What really happened at the Lake Changjin?

If CCP were to be believed for historical accuracies then many countries and seas should themselves give in to China. However, fortunately, we look for objective history and CCP interpretations mostly turn out to be blatant propaganda. The UN-led mostly by the US military — had advanced beyond the pre-war line and was approaching the Chinese borders in December 1950, six months after the initial North Korean onslaught had forced the South’s troops back to the ever-shrinking perimeter around the southern city of Busan.

Approximately 30,000 US troops had advanced to Lake Changjin, also known as Chosin Reservoir in the West when they were abruptly challenged by eight Chinese divisions totalling 150,000 troops. The majority of the US forces were able to escape by road to the port of Hungnam, where they were evacuated. There were almost 48,000 deaths on the Chinese side. While The Battle at Lake Changjin was bloody but in no sense, the Chinese were the victors. The two countries of South & North Koreas are still at war and there is only a long-held armistice at hand. The Battle at Lake Changjin, a Propaganda movie is a clear attempt on part of CCP to prop up nationalistic sentiments among its people and PLA so that the country can maintain stability at this vulnerable time.