CCP hasn’t learned its lesson from the disastrous “One Child Policy”, their new kids policy is a recipe for disaster 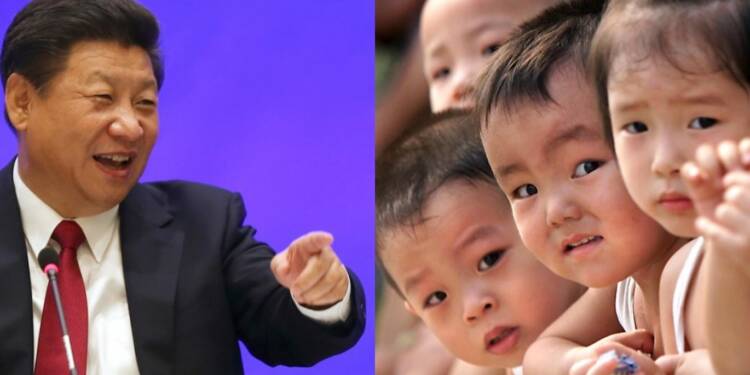 There is one key characteristic of every authoritarian organisation- it never admits that it went wrong and it never shows a desire to learn from its past mistakes. The Chinese Communist Party (CCP) symbolises this authoritarianism. At TFI, we have told you about the disaster that China’s ‘One Child Policy’ is for a number of reasons–

The Chinese people have not forgotten how the one child policy snatched babies out of their mothers’ arms and killed them with sheer brutality. The One Child Policy became a live example of the CCP’s tyranny and hardened anti-CCP activism. This is why, decades later, Xi Jinping even tried to push the three-child policy. However, the Chinese family institutions are so badly fractured that normalizing the situation all over again doesn’t seem easy. Meanwhile, the authoritarian CCP hasn’t learnt from its mistakes and has prepared another disaster recipe— a new kids policy that will punish the parents for their children’s ‘misbehavior’.

The CCP is being very clear about one thing— children and teenagers of the present generation must grow up to become CCP loyalists instead of becoming rebels or revolutionaries. This is why it has already taken some strict actions like banning video games, tutoring businesses and online education, apart from cracking down on English teachers and monitoring school education.

In fact, the Chinese Parliament will consider a legislation to punish parents in case their children indulge in “very bad behaviour” or commit crimes. The draft family education promotion law proposes reprimanding and ordering parents to go through family education guidance programmes if CCP prosecutors believe that the parents of ‘guilty’ children had misbehaved.

Zang Tiewei, spokesman of the Legislative Affairs Commission under the National People’s Congress (NPC) said, “There are many reasons for adolescents to misbehave, and the lack of or inappropriate family education is the major cause.”

The CCP is making one thing clear- raising Party loyalists isn’t the job of Party officials alone and even parents have to force their children into becoming staunch CCP supporters.

This is why the CCP is looking to bring in a very open-ended, ambiguous and vague legislation. After all how do you define misbehabiour or “very bad behaviour”. In the dictionary of a capricious CCP official, these terms will be even more vague and ambiguous, and the proposed family education promotion law will be misused and abused in all certainty.

The CCP is, of course, targeting the vulnerable population- the adolescents and the teenagers who are at risk of reading literature. The CCP fears that such children are at risk of reading literature about the free world or getting to know about the crimes that CCP commits against Uyghur Muslims in Xinjiang, Buddhist monks in Tibet and pro-democracy activists in Hong Kong. They will find out about the Tiananmen Square massacre of 1989, when pro-democracy students were slaughtered by the CCP.

Therefore, the CCP is using broad terminologies like “very bad behaviour” to ensure that the teenagers aren’t able to talk about such issues or develop affinity towards the true tenets of democracy. The CCP is therefore looking to turn the present generation of Chinese children and adolescents into robotic soldiers who simply do CCP’s bidding without using their cognitive faculties.  But things will get interesting when the same people join the Chinese PLA or reach the higher echelons of power and business. They will not remain so robotic after that.

Why the new child policy is bound to fail

What happens when you put a climber in a glass tube? It keeps growing in the direction it is destined to take. It may be restrained temporarily but it will never stop growing and will ultimately break out of the glass tube. The glass tube cannot hold back the climber forever and will be shattered by the sheer intensity of the climber’s strength.

Similarly, the anti-CCP movement has started. The CCP can restrict its speed and can slow down the process of an outright rebellion by Chinese people but things will ultimately heat up and explode in China. The Chinese kids, teenagers and youth are ridden with anti-China sentiment. So, they will ultimately turn into revolutionaries.

With its new policy, the CCP will create a suffocating environment of fear, self-censorship and tyranny. The children will be in perpetual fear that some CCP official will come and pick up their parents, who will then be referred to the so-called family education guidance programmes, which will actually result into mass detention centres in the Communist nation.

The level of microgovernance and intrusive surveillance in family life that the CCP is planning will trigger negative sentiment against it. The right to live a free life is the very basis of human existence and you simply cannot subtract the desire to live freely from a human life, so turning children into robotic soldiers with a sword hanging on their parents’ heads will force them to find a way around the CCP’s reach. It will harden their resolve destroy the Chinese Communist Party.

By pushing too hard, the CCP is creating a future threat for itself and ultimately Chinese children will grow immune to the overreach of Communist Party officials. It is like a pressure cooker situation, in which the cooker explodes if you don’t let the pressure out for too long.

And why should it die down? The one child policy has created way too much of a burden on several generations of sibling-less children in China who find it hard to do their jobs and look after their folks at the same time. Sustaining elders in China has become such a time and resource-consuming task that Chinese youngsters aren’t ready to give birth to children raise new families.

The Chinese people aren’t allowed to speak a lot but even Xi Jinping knows how the one child policy has bruised the Chinese society in general and the Chinese family life in particular. Yet, the CCP is bringing in another defeatist policy which is bound to backfire all over again.