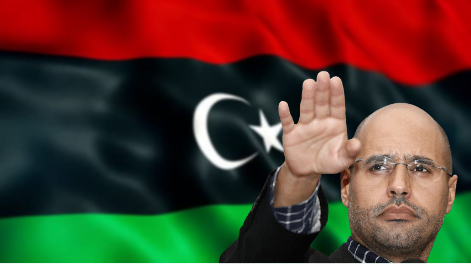 We have some really interesting news coming in from Libya. The war-torn African nation has junked Obama’s legacy and is falling back upon the Gaddafis. Slain Libyan dictator Mu’ammar Gaddafi’s son Saif al-Islam wants to “restore the lost unity” of his country even as a wartorn Libya struggles to emerge out of a brutal civil war that broke out after the brutal lynching of Mu’ammar Gaddafi in the year 2011.

Gaddafi’s son to run for President?

Mua’mmar Gaddafi’s son has made a public appearance after several years. In a rare interview with NYT, Saif al-Islam said that politicians who led Libya after his father’s death have brought Libyans “nothing but misery”.

Saif al-Islam added, “It is time for a return to the past. The country — it’s on its knees… There’s no money, no security. There’s no life here.”

During the civil war, three of Gaddafi’s seven sons were killed. Saif al-Islam was taken captive by a Libyan militia in November 2011 and was released later. Later, a Tripoli court sentenced him to death for committing crimes during the revolt.

However, Gaddafi’s son Saif al-Islam is confident that “these legal issues could be negotiated away if a majority of the Libyan people choose him as their leader”.

As per NYT, Mu’ammar Gaddafi’s son said, “I’ve been away from the Libyan people for 10 years. You need to come back slowly, slowly. Like a striptease. You need to play with their minds a little.”

Libya’s decision to fall back on Gaddafis is a blot on Obama’s legacy:

People in Libya getting nostalgic about Gaddafi’s reign. True, Gaddafi was a crazy dictator who said crazy things but at least with Mu’ammar Gaddafi in power, oil was selling, the country was united, money was coming in and there was some peace.

In fact, as per Ellen Brown, the founder and president of the Public Banking Institute, “It was thanks to the 2016 publication of Hillary Clinton’s emails that the reason behind NATO’s entry into Libya was revealed. It was to prevent the creation of an independent hard currency in Africa that would free the continent from its economic bondage under the dollar, the IMF and the French African franc. That hard currency would have allowed Africa to shake off the last heavy chains of colonial exploitation.”

So, regardless of whoever he was, Mu’ammar Gaddafi was trying to make Libya and Africa rich. Libya was better off under Mu’ammar Gaddafi’s reign. Things went south for Libya only after Obama, abetted by then-Secretary of State Hillary Clinton, decided to invade the African nation. US-NATO intervention in Libya was meant to protect the African country’s civilians from human rights violations but there is no evidence to verify allegations of human rights violations.

Obama’s invasion opened by Libya to a bloody Game of Thrones:

Hillary Clinton after learning about the brutal murder of Munammar Gaddafi exclaimed “We came, we saw, he died!”. However, Gaddafi’s wasn’t the last death in the Libyan civil war which was sparked by the US invasion of the African country.

Gadaffi was killed by the US-recognised National Transitional Council forces. After his death, a bloody Game of Thrones descended upon Libya that involved jihadist terror groups like the Muslim Brotherhood and ISIS. In Gaddafi’s absence, Libya got crippled by political and religious differences.

Today, Libya stands destroyed by chaos with the Muslim Brotherhood government fighting a two-year-long battle against former Gaddafi General Khalifa Haftar till the elections in March this year. Libya became the subject of an international dispute with Egypt, France, Jordan, Saudi Arabia, the United Arab Emirates, and Russia supporting Haftar, whereas Italy, Qatar, and Turkey supported the Muslim Brotherhood government.

So, the question is what was the point of Obama’s Libya invasion. He did try to use the Benghazi terror attack to cover up his failure and justify the intervention in Libya but Libyans seem to have understood that their nation was destroyed because of Obama’s interventionist policies.

Later, Obama had tried to do the same thing in Syria- take down a pro-Russia Bashar al-Assad. Therefore, the allegations of Assad cracking down on his people came up only when the Obama administration was making desperate attempts to enter Syria.

Obama’s policies led to the rise of ISIS and he would have forced a regime change in Syria just like he forced the one in Libya, had it not been for Russian President Vladimir Putin. Today, the Arab world is re-establishing ties with the Assad regime in Syria because they understand that Assad is the one holding his country together.

Libya falling back on Gaddafi and the Arab world re-establishing ties with Syria are two important developments that show how Obama-era policies are becoming outdated and getting junked by the Middle East.