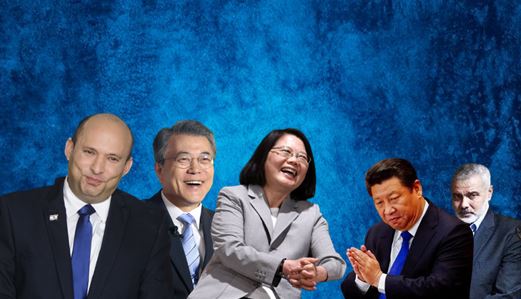 This year, China graduated to become one of Israel’s staunchest enemies, after Beijing threw its weight behind Hamas in its 11-day war against Jerusalem. Now, Israel is returning the favour, but with much more enthusiasm and vigour.

If Israel’s keenness to ramp up its defense ties with two of China’s immediate neighbors is any indication, the Jewish nation is making China taste its own poison that could have grave consequences for China’s expansionist ambitions in the Indo-Pacific region.

As per a Defense News article, loitering munitions combine the capabilities of drones and missiles by searching, identifying, attacking, and destroying targets. This makes striking down a sensitive or moving target much easier for the attacking vehicle. The report also highlights that the two companies had earlier joined hands “to collaborate on loitering munitions with regards to the South Korean Army’s pursuit of manned-unmanned teaming, or MUM-T, systems.”.

By strengthening South Korea’s aerospace industries, Israel aims to mount pressure on a belligerent China. People in South Korea now view China as a major threat to their nation’s national security. Despite the Moon Jae-in administration’s blatant prostration before the Chinese regime, the South Korean masses have increasingly grown negative views towards Beijing.

China – the most hated country in South Korea

A joint survey by the polling company Hankook Research and the Korean news magazine SisaIN recently revealed that China is now the most hated country in South Korea, even more than Japan—the former colonial ruler. Anti-China opposition parties are highly likely to outperform the incumbent Moon administration in the 2022 presidential elections, and that could very well put both the countries on a fatal collision course.

Jerusalem’s increasing bonhomie with Taiwan also manifests Israel’s strategy to arm China’s rivals to ratchet up pressure on the communist country. Taiwan’s foreign minister Joseph Wu had penned an article in The Jerusalem Post this July titled, “Why Taiwan seeks Israel’s help to combat cyber-security threats,”, in which the Taiwanese minister had suggested that while China carries out several cyber-attacks in Taiwan, Israel could collaborate with the island country in the area of cyber-security.

Presently, Taiwan and Israel do not recognise each other. The ties between the two countries have started picking up only over the past one or two years, because till now, Israel maintained a good relationship with China and wasn’t ready to annoy Beijing by getting too close to Taiwan. Israel too, would seek to leverage its ties with Taiwan to rein in China’s anti-Israeli activities in the Middle East.

When Israel and Hamas shared hostilities earlier this year, Beijing was found supporting Hamas and Palestine. Not just that, China was also accused of arming Hamas with missiles and rockets. Also, with China getting cozy with Iran, Israel realised that Beijing has chosen Iran over Israel. Therefore, Israel has no genuine interest in preserving any relationship with China now. This is exactly where Taiwan is trying to make some deep inroads by seeking better ties with Israel.

While the relationship between Israel and China has been in a downward spiral over the past year, Taiwan and Israel have been improving their bilateral ties. Recently, Taiwan decided to open its first-ever permanent Jewish community center, in a bid to appease Israel.

Read More: To counter the China-Hamas nexus, Israel and Taiwan are coming together

Later, Taiwan also announced that it would send military and think tank representatives to Israel for learning about its reserve mobilization systems to enhance military preparedness. The fact remains that Taiwan wants to improve its military preparedness and cyber-security against Chinese misadventures by cooperating with Israel, and Israel itself seems willing to help Taiwan.

So, Israel is now rallying China’s neighbours against China itself. Israel is also showing its willingness to ramp up its engagement with the Philippines on water management and pandemic-related issues. All in all, Israeli charm-offensive in China’s neighborhood looks well poised to drive the Chinese expansionist ambitions straight into the ground.

The list of sworn Chinese enemies just got bigger with Israel as the latest addition, and the communist nation should be well advised to brace for a perfect storm in the times to come.