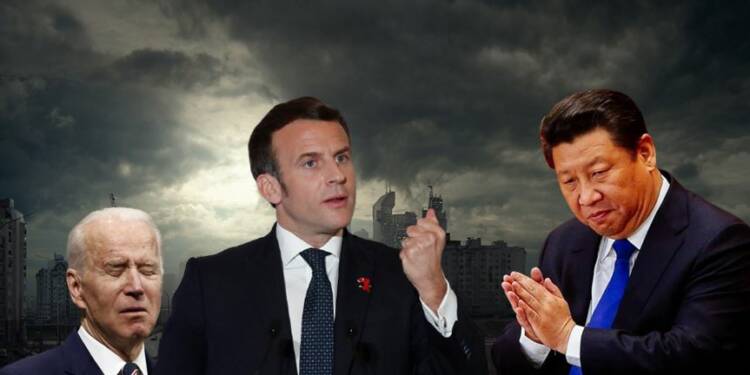 We are getting a clear message from Europe – Germany’s political future is uncertain with an inconclusive poll results and a complex coalition situation building up in Berlin’s power corridors. However, one thing is for certain – China’s biggest friend in Europe, Angela Merkel, who had pushed both Germany and the EU closer to Beijing, is not coming back. So, we can expect French President Emmanuel Macron to take up the leadership role and start competing with the USA, in containing China. Macron is a tall EU leader and wants to catapult France to the top position in Europe.

He has taken a stand against radical Islamism and wokeism (or Islamo-leftism) coming from the US universities. And now, a Chinese meltdown suggests that Macron is all set to lead the EU campaign against China. Macron, who has already had a fallout with the US over the AUKUS deal, is looking to outpace Biden in beating China.

China is losing its cool over Macron’s strong leadership against Chinese hegemony. Zhang Jun, the Ambassador to the United Nations, even warned France not to “submit to the United States”, to risk losing its dignity and respect.

Zhang made his remarks in response to a joint statement on Xinjiang signed by 43 mainly western countries.

The joint statement read out by France at a UN meeting stated, “We call on China to allow immediate, meaningful and unfettered access to Xinjiang for independent observers, including the UN High Commissioner for Human Rights and her office.”

The statement added, “We are particularly concerned about the situation in the Xinjiang Uygur autonomous region,” while “citing” credible reports which indicate “the existence of a large network of ‘political reeducation’ camps where over a million people have been arbitrarily detained.”

In response, Zhang said, “To France and other followers of the US: what you are doing is submitting your independence and autonomy, and serving as the henchmen of the US, as if you can gain superiority by acting at the beck and call of the superpower. But the truth is, you are giving up your own dignity, and will win no respect from others.”

France not following but competing with the US:

China seems to be nervous about how French President Emmanuel Macron has been acting against Beijing’s intimidation tactics for quite some time now. Macron is not as blunt as former US President Donald Trump in criticising and attacking  China, but he does go against Chinese interests every now and then.

Also read: “France will never let Lebanon go,” China had its eyes on Lebanon, then came Macron to kick it out

Macron has been resisting predatory Chinese investments and involvement in Lebanon for the past one year. In fact, France has pushed for the downfall of Hezbollah, which was allowing China to get involved in the middle-east nation. Macron has also successfully resisted Chinese attempts to encourage anti-French sentiment in the French Overseas Territory of New Caledonia.

Macron, as an emerging EU de facto leader, enjoys considerable leverage over China. After all, EU is one of China’s biggest trade partners and Macron can use this leverage to blackmail and hurt China. In fact, Macron has already used his influence to raise issues like human rights violations in Xinjiang and the issue of Taiwan’s independent status.

A seemingly nervous China is particularly afraid of Macron, and the Chinese Communist Party (CCP) mouthpiece Global Times has been publishing propaganda material against the French President since the past one year or so.

Also read: China put all its might at snatching French territory New Caledonia, but France has just struck a deadly blow

On Beijing’s part, it is probably convenient to allege that France is following the US agenda. But in reality, France has had a major fallout with the US over the AUKUS pact that involved Australia, UK and the US working on a joint submarines program. France felt sidelined with Australia giving up on its commitment to purchase French submarines.

A visibly miffed French Foreign Minister Jean-Yves Le Drian even said, “this is not something allies do to each other”.

France warms up to India and Japan:

In fact, a prospective submarines deal between Paris and Canberra may have got derailed, but France has really good relations with the other two Quad members – India and Japan.

Earlier this year, French Army troops trained in Kyushu (Japan) at Kirishima Training Ground along with Japan’s Ground Self Defense Force (GSDF) and US marines. This was the first time in the post-war era that Japan has opened up to an exercise with a non-US foreign military force, on its territory.

France has also been regularly sending its frontline naval assets like the amphibious assault ship ‘Tonnerre’ and the frigate ‘Surcouf’ on deployments in the hotly contested south China sea region. In February, France had also deployed frigate ‘Prairial’ to the east China sea, to help the Japan Coast Guard and the Japan Maritime Self-Defense Force in monitoring North Korean vessels activity.

Also read: France Army to train alongside Japan’s ‘Marines’. It’s a bold message to both China and the USA

Meanwhile, France is also stepping up diplomatic efforts to further improve its friendly ties with New Delhi. France has been prioritising the delivery of the Rafale fighter aircrafts to India, with India and China locked in a standoff in Eastern Ladakh.

French Ambassador to India Emmanuel Lenain said, “It (delivery of aircraft) will be ahead of the schedule. We are very proud of that. In spite of Covid it has not been disturbed at all on the contrary.”

In fact, France wants a broader partnership in the Indo-Pacific to handle the China challenge and it resists bloc politics of the kind seen in the AUKUS pact. France is communicating this clear message message India in a bid to deepen the Indo-French alliance.

Last month, Lenain said, “You know our approach. We don’t think the logic of blocs being military confrontational is the answer to our problem. We feel that we need a much broader approach with much more partnership between countries, we need to provide an alternative to order pushed by certain countries in the region, we need a positive agenda.”

In a bid to reassert India’s centrality, the French envoy also said, “My President, your Prime Minister spoke, ministers spoke. India is at the core of our Indo-Pacific strategy as we have the same approach. When you’ve challenges like these, you have two solutions. Either you develop your strategic autonomy, give yourself means to be independent or you just rely on other country to provide you security.”

France is following its own path when it comes to challenging China. It is opening up avenues for cooperation in the Indo-Pacific, with a single goal in mind – challenging the Chinese hegemony. In the process, it is competing fiercely with the USA, to harm China more than any other nation, and this means a brutal double whammy for Beijing.