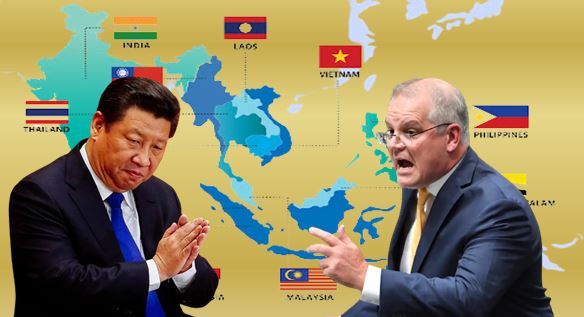 The establishment of QUAD and the popularisation of the Indo-Pacific region has brought the Association of South-East Asian Nations (ASEAN) to the centre stage of the regional geopolitics. At this juncture, China has become highly vulnerable and Australia is leaving no stone unturned to get back at China, be it the AUKUS deal, the regulations on foreign investments or dragging China into international forums for its human rights record. In such a situation, China has no option but to be at the mercy of its ASEAN neighbours, who are deciding to either support or oppose AUKUS.

It is high time ASEAN realises that China is at the mercy of the ASEAN member nations to sustain the thin veil of deceit to show itself as a strongman. The realisation will be a big setback for the Chinese Communist Party (CCP), given it is the unified ASEAN market that has helped China sustain somewhat economically. The regional organisation has never shied away from capitalising on the Chinese investments while trying to balance it in the security arena with the US engagement in the region. China is lobbying southeast Asian neighbours to oppose a US-led three-way security treaty (AUKUS) that would allow Australia to launch nuclear-powered submarines. But the task may end up becoming counterproductive.

Late last month, Chinese Foreign Minister Wang Yi warned that the new trilateral agreement between Australia, UK, and the United States posed concealed threats to regional peace and security, during separate phone discussions with counterparts in Malaysia and Brunei. If Australia were to obtain submarines capable of carrying nuclear missiles, he said, it would increase the risk of nuclear proliferation and trigger an arms race in the region.

Wang’s comments, which came two weeks after the unexpected AUKUS announcement on September 15, were generally interpreted as Beijing’s official response to the new anglophone defence contract aimed at limiting China’s regional dominance. The United States, the United Kingdom, and Australia have announced a ‘historic’ military collaboration in the Pacific. However, many believe it will be difficult for Beijing to win over politicians in Southeast Asia, where opinions on the AUKUS deal are still divided.

ASEAN and the shine of Chinese market and investments:

The economic dynamics of East Asia saw a sea change with the bursting of the 1997 economic bubble and the subsequent crisis. However as the South Korean, Japanese and Taiwanese companies were impacted heavily, China was able to leap ahead of these countries economically. Following Beijing’s entry into the World Trade Organization (WTO) in the beginning of 2002, the ASEAN nations increased their engagement with the CCP. This engagement only deepened after the 2008 financial crisis, which ended the US unipolarity in real terms. The benign outlook of China made it an acceptable norm to do business with China.

In addition to this, with the entry of Xi Jinping, things became more complex as ASEAN needed to secure its sovereignty as well as keep the investments and trade coming. With the BRI investments pouring in, examples set by Laos and Cambodia show how too much investment can make it hard for the recipient country to say no to any CCP requests and projects, subsequently becoming a neo-colony of Beijing.

While the risks are ample, the profit has been too lucrative to resist. Trade between China and the Association of Southeast Asian Nations (ASEAN) increased from $8.36 billion in 1991 to $685.28 billion in 2020, an average annual growth rate of 16.5 per cent. This means, in spite of the increasing intensity of geopolitical risk from Beijing, the member nations are still not sure which is important – absolute sovereignty or compromising some in favour of continued Chinese investment.

China’s dependence on ASEAN and the Australian geopolitical offensive:

Members of the ASEAN community such as Vietnam, the Philippines, Malaysia, Brunei, and Indonesia are among the most visible victims of Chinese bullying. As part of its nine-dash line claims, China claims practically the entire south China sea, and it often harasses fishermen and other nautical elements of southeast Asian nations in the hotly contested region. Following Trump’s tariff wars with China, ASEAN became a crucial export destination for Chinese manufacturers, and the Jakarta-based regional body became China’s largest trade partner last year.

Australia is already at odds with China economically, and it has openly backed the democratic island nation of Taiwan, in an effort to put further pressure on the Chinese leadership. For the past year and a half, China’s trade conflict has aided Australian businesses in diversifying their supply networks. The Australian economy has resurfaced stronger than it has ever been. Acting on this, the Scott Morrison government is now urging Australian businesses to diversify their markets beyond China. The Australian government has now put in place a range of support measures to help businesses find other markets, diversify supply chains, and compensate for lost exports to China.

The trade numbers of ASEAN-China trade are the only hope keeping China’s economy barely afloat. With the western countries having increased their geopolitical engagement in the region (AUKUS being the latest trigger), the CCP cannot intimidate or browbeat the regional block – it can only request support. For now, the region seems divided, with the Philippines and Singapore reacting positively to the deal, while Vietnam, the most vocal critic of Chinese claims in the south China sea, appeared to be cautious.

On the other hand, even though nuclear weapons were not part of the plan, Malaysia and Indonesia, which had previously warned against arms races and nuclear proliferation, said after their foreign ministers met in Jakarta on Monday that they were still “worried and concerned” that AUKUS could lead to an arms race in southeast Asia. While the concerns are legitimate, the block is fast realising the cost of Chinese investments and as it realises the position of leverage, CCP will find it increasingly difficult to engage with ASEAN, on whose mercy it is sustaining.