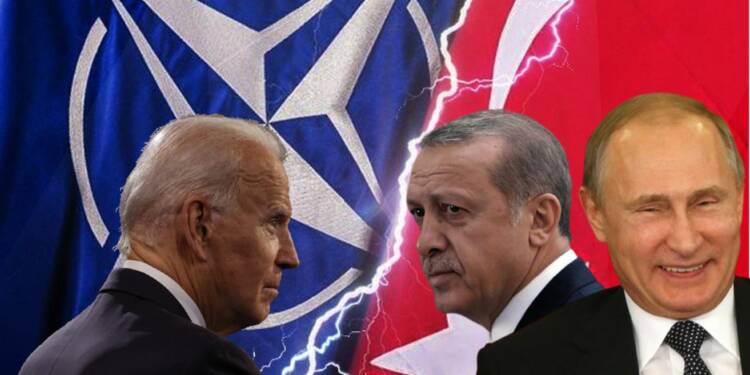 Russian President Vladimir Putin has orchestrated a divorce between Turkish President Recep Tayyip Erdoğan and the West. In the process, Russia’s political annexation of Ankara is now complete. Erdoğan has effectively become a pawn of Russia and Turkey can no longer swing between Russia and the West in a bid to blackmail both of them.

Turkish President has made a strange move. He has abruptly expelled Ambassadors of ten countries, including those of Germany and the United States of America. These Ambassadors had appealed for the release of a jailed Civil society activist and Erdoğan, therefore, seems to have retaliated with diplomatic aggression.

Erdoğan’s retaliatory move comes after the now-expelled envoys issued a joint statement condemning the arbitrary detention of Parisian-born philanthropist-activist Osman Kavala while claiming that it “cast a shadow” over Turkey.

On his part, Erdoğan insinuated the critical foreign envoys of “indecency” and announced, “I have ordered our foreign minister to declare these 10 ambassadors as persona non grata as soon as possible.” The Turkish President also said, “They must leave here the day they no longer know Turkey.”

Russian hand in the expulsion of foreign envoys by Turkey?

Make no mistake, Turkey and the West are at geopolitical crossroads. First, the Paris-based FATF grey listed Turkey over money laundering and terror financing. And now, the Kavala controversy is fracturing Turkey-West ties.

Kavala has been charged with having links to the 2013 anti-government protests in Turkey and a couple of attempts in 2016, which Erdoğan claims to have been backed by Western powers. Since, 2017, he has been jailed in Turkey without any conviction. Therefore, Erdoğan lost his cool after foreign envoys demanded a “just and speedy disposal” of the case.

However, despite all its problems with the West, Turkey remains a NATO ally. Erdoğan simply can’t wake up one fine morning and decide- let’s expel envoys of ten Western nations today. If he has taken such a step, it ought to have been backed by a big power interested in divorcing Turkey and the West. And by all means, it has to be Vladimir Putin.

Why Vladimir Putin wants to divorce Turkey and the West:

Turkey has traditionally been a part of the NATO- the transatlantic military alliance which was originally supposed to push back against the erstwhile Soviet Union. In the post-Soviet collapse era too, Turkey remained a friend of the Western world. However, things started changing in 2016.

In 2016, Erdoğan faced a coup attempt by his internal enemies. The Western leaders remained silent when the unsuccessful coup was being attempted, whereas Putin sent a message of support for the Turkish President.

Since then, a radical shift was visible in Ankara’s foreign policy. Erdoğan made a deliberate attempt to engage Putin. In the next two and a half years, Putin and Erdoğan met 12 times and Turkey even purchased the Russian S-400 air defence, for which it was ultimately sanctioned by the US.

Turkey used the ‘Russia’ card whenever it had to blackmail the US and its European allies.

On the other hand, Turkey-Russia ties haven’t been a smooth ride either. Erdoğan is a hardcore Islamist who uses regional proxies and jihadist militias to achieve his geopolitical goals. Turkey and Russia have often found themselves vouching for opposite sides in conflicts like the Libya war, Syria war and the Nagorno-Karabakh war.

Again, Turkey uses the ‘NATO’ card to blackmail Russia. When Russia filled in the vacuum in Syria left behind by a US troops pull-out in 2019, a nervous Turkey had asked the US to supply Patriot missiles though the request was shot down by the Oval Office. So, Erdoğan’s plan was simple- wave the ‘S-400’ threat against the West and point Patriot missiles against Russia.

However, the expulsion of 10 Western envoys changes everything. The diplomatically unsavoury move has ended all chances of reconciliation between the West and Turkey. Erdoğan has no choice to make- he is left only with Russia.

Putin, on the other hand, has gotten rid of Turkey’s ‘Western’ threat. He can manipulate Ankara the way he wants. Moscow can use Turkey against the West and Russia also gets a lot of leverage to decide how Turkey should behave in Libya, Syria, or the Nagorno-Karabakh region. Russia’s political annexation of Turkey is complete and the Erdoğan’s survival is now totally dependent on keeping Putin happy.