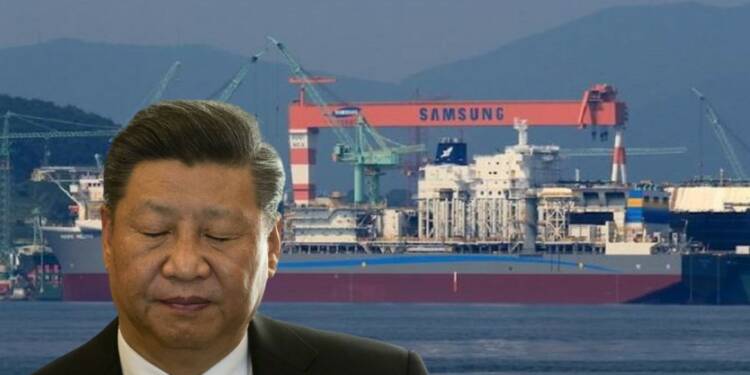 The exodus of major companies and investors out of China was already concerning enough, but now the South Korean shipbuilding giant Samsung has also decided to close its factory and move out. After allegedly agreeing to hand over its land to the local government for industrial renewal, South Korean shipbuilding giant Samsung Heavy Industries (SHI) recently announced the closure of its plant Ningbo in the eastern Chinese province of Zhejiang, sparking days of protests by laid-off workers seeking better severance pay.

The Ningbo plant, which opened in 1995, specialises in the production of ship blocks with iron structures as well as shipbuilding for both international and domestic markets. Each year, it produces and supplies about 200,000 tonnes of shipbuilding blocks. Workers protested Samsung Heavy Industries’ sudden closure of its 26-year-old Ningbo shipyard in eastern China, demanding more compensation as the South Korean business exits a low-profit operation. However, one can easily understand the problem is with the Chinese Communist Party’s cumulative policies and actions in the past couple of years.

The announcement comes as Asia’s shipbuilding industry Samsung Heavy Industries undergoes a major transformation. South Korea’s government has been laying out measures to resurrect the country’s shipbuilding and shipping industry since 2019. It pushed for the combination of Hyundai Heavy Industries and Daewoo Shipbuilding, resulting in the world’s largest shipyard. According to maritime services provider Clarksons PLC’s assessment on the global shipping market, South Korea is on course to overtake China in shipbuilding orders in the second half of this year.

Simultaneously, Beijing is pursuing plans to consolidate the country’s overburdened state-owned industry in order to reduce debt and boost global competitiveness. Under a restructuring plan approved by the State Council, China State Shipbuilding Corp. (CSSC) and China Shipbuilding Industry Corp. (CSIC), the country’s two largest state-owned shipbuilding conglomerates, would merge to establish China Shipping Group. In such a situation, South Korea does not want to maximise its losses so that China can maximise profit, as it seems a very foolish proposition.

Changing perception of the Korean people on China

A recent poll revealed a significant shift in the public image of neighbouring countries in South Korea, which could influence presidential contenders’ foreign policy objectives. According to a poll conducted by Hankook Research and the South Korean online publication Sisain, the South Korean people have the lowest opinion of China, with only North Korea and Japan rated higher. While the Moon Jae-in government maintained the policy of strategic ambiguity with its relationship with the US and China., On the other hand, the conservative camp which is in a more favourable position to win has been critical of China and the North Korean regime.

As per analysts, four key incidents have fuelled anti-China sentiment in South Korea: the THAAD deployment in 2017, Beijing‘s response to Hong Kong’s pro-democracy movement in 2019, the COVID-19 pandemic in early 2020, and China’s attempts at “cultural imperialism” in late 2020. In addition to this, Koreans have also reacted decisively against the attempt of the Chinese Communist Party to showcase China’s cultural supremacy as well as claiming some of the cultural symbols of Korea.

The current young generation hates China more than even Japan. They are not anachronistic, and the South Korean youngsters realize that China is the main hegemonic power that they must fight. They also hate Beijing’s “cultural imperialism” and want to snap all ties with the authoritarian nation. As the elections a year to go, the opposition which is looking strong has worked well to address the concerns of the youngsters. In such a situation, the moving out of a Shipbuilding giant out of China can turn out to be a harbinger of economic drought.

The fascinating re-emergence of Russia as a superpower