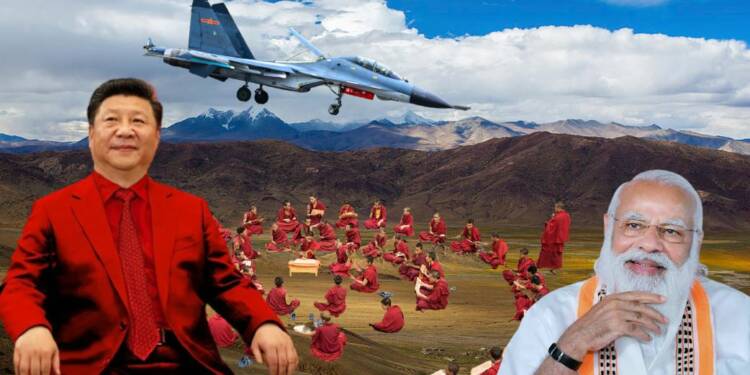 For well over 17 months now, the Peoples Liberation Army (PLA) of China, comprised of distinguished and decorated wimps, sissies and little emperors, is being beaten black and blue on a regular basis by the mighty Indian armed forces. Yet, Chinese President Xi Jinping has a larger-than-life ego, and despite his soldiers being thrashed regularly by India, the man is not in a mood to give up. This is having its own consequences, of course, as the PLA is increasingly growing wary of its leadership. That being said, Jinping realises that he cannot afford continuing a border standoff with India forever. So, the CCP General Secretary has pushed forward a new law which marks a new approach in the Chinese handling of border disputes.

China on Saturday, passed a new law to strengthen land border protection amid the ongoing military tension along the disputed boundary with India. The legislation formalises combining the military defence of China’s land borders with improving social and economic development in border areas. According to the Hindustan Times, the law mandates that the PLA works closely with civilians staying in border areas (for example, Tibetan villagers living along the border with India, Bhutan and Nepal), and use them as China’s first line of defence.

What does the new law say?

Let’s just say, the new law passed by China’s rubberstamp parliament ensures that the borders of China are made non-negotiable entities. Essentially, China now wants all countries it shares border disputes with, to simply suck it up, and abide by the Chinese laws. Unfortunately for Xi Jinping, India is not a country which will give in to China. In fact, India is preparing itself to burn right through the Tibetan human shield which the Chinese Communist Party (CCP) and the PLA are trying to erect across the Line of Actual Control (LAC), which is the de-facto Indo Tibetan border.

The law also says that the state “…shall take measures to safeguard territorial integrity and land boundaries and guard against and combat any act that undermines territorial sovereignty and land boundaries.” The law stipulates that the state shall take measures to “…strengthen border defence, support economic and social development as well as opening-up in border areas, improve public services and infrastructure in such areas, encourage and support people’s life and work there, and promote coordination between border defence and social, economic development in border areas”.

However, this approach of China is bound to fail, rather magnificently. India is not a country which will shy away from protecting itself, and under the leadership of Prime Minister Narendra Modi, India can see right through the devious plans of the Chinese to erect a Tibetan human shield across the border aimed at deterring Indian military offensives.

Also read: China is preparing for a winter war with India, too bad India is two paces ahead

Recently, India’s Eastern Army Commander Lt Gen Manoj Pande, who is responsible for the 1346 km LAC from Sikkim to Arunachal Pradesh, had said that the “dual civil and military use” of border villages is a concern for India, but added that India had taken suitable measures to ensure that such a policy does not impact its operations. He said, “According to their own policy or strategy, model villages have come up near the border. In what quantity have people settled there, that’s a different question…And we have taken note of it in our operational planning.”.

So, despite China making use of Tibetan civilians like a human shield wall against India, the Indian military leadership has signalled that its operational planning is going on unhindered nevertheless. Therefore, the CCP’s grand plan to use civilian settlements across the border with India has already proven to be a grand failure.

India’s ‘Tibetology’ course for its soldiers:

The Indian Army is now giving special training to soldiers and officers to help them win over the hearts of Tibetans and nullify whatever little influence China has in the occupied region. Soldiers and officers serving along the LAC are being given special training, under which they are learning all about Tibet. The course called ‘Tibetology’ encompasses training of culture, language, history along with the Buddhist philosophy followed in Tibet. The Tibetology course is aimed towards making soldiers efficient in handling intelligence operations in Tibet, ultimately leading to better strategies for India.

Also read: Tibetology: India’s new weapon against China and the magic it is working

In its present form, the total duration of the Tibetology course is two weeks. However, the government is planning to extend the duration of the course to three months. The course is biennial in nature, and will train Indian defence personnel through movies, literature, and book reviews. Additionally, they will also be visiting monasteries and villages to have an on-the-ground understanding of Tibet. The course will also include Lamas (Tibetan spiritual gurus) imparting their knowledge to the Indian Army.

The sole reason why China brought in the new law to legitimise civilian settlements across all its borders, was to deter India from launching an all-out offensive against the communist nation, in which case, the PLA would be the first to be slaughtered. China’s push for border villages and towns is meant to ensure that not soldiers, but innocent Tibetan civilians are its first line of defense against the Indian armed forces. However, India hardy finds itself in a conflict of choices. The security and territorial integrity of India is paramount, and no walls which China puts up on the border can deter India from doing the right thing.