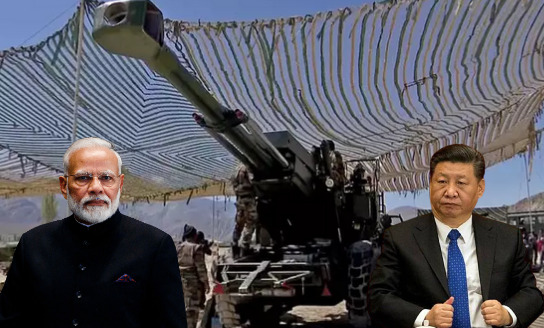 China is trying to up the ante against India across the Line of Actual Control, which is the effective Indo-Tibetan border in the mighty Himalayas. Over 100 PLA soldiers crossed the border at Barahoti in the Indian state of Uttarakhand last month, damaged some infrastructure, including a bridge, before retreating. Now, according to a Times of India report, China has constructed modular container-based accommodations for its soldiers in around eight locations near eastern Ladakh. The container-based accommodations have been constructed at Wahab Zilga near the Karakoram Pass in the north to Pique, Hot Springs, Chang La, Tashigong, Manza and Churup. The PLA recently also carried out a night battle exercise at over 16,000 feet in the Xinjiang region, in an apparent warning to India.

On its part, however, India is more than ready to deal with the Chinese threat than it has even been. While China has been busy aggressing against several countries in its neighbourhood, India has been solely focused on taking on the red rogue country. Another Times of India report added that the Indian Army continues with its strong combat posture along the entire frontier with China, which includes high-volume artillery firepower ranging from the older 105mm field guns, Bofors and rocket systems to the spanking new M-777 ultra-light howitzers, amid no signs of de-escalation in eastern Ladakh.

Interestingly, the M-777 howitzers can be airlifted from one sector to another in forwarding areas by Chinook helicopters, while the swifter mobilisation of heavier artillery guns has been made possible by the roads constructed by India’s Border Roads Organisation (BRO), in the past couple of years that Prime Minister Narendra Modi has been in charge of the country.

It has been more than a year since the Indian Army started deploying a large number of tanks in Eastern Ladakh along the Indo-Tibetan border. Over time, the Indian armoured regiments have trained and evolved their standard operating procedures to use these mighty machines more effectively at altitudes ranging from 14,000 feet to 17,000 feet above sea level – which are common in the region.

Last year, with the beginning of Operation Snow Leopard, which was aimed at countering China’s wimp-like troops in Eastern Ladakh, the Indian Army brought the T-90 Bhishma and T-72 Ajay tanks along with the BMP series Infantry Combat Vehicles from the deserts and plains to these high-altitude locations.

Both sides continue to maintain troops in large numbers along the Line of Actual Control, despite disengagement at few locations like Pangong Tso Lake and Gogra heights. The Indian Army has continued to strengthen its operations in these areas with tanks and ICVs to tackle any threat or challenge at these heights. In a historic shift in June, at least 50,000 Indian troops were redirected to the northern border with China, taking India’s total troop tally in the region to well over 2,00,000 — signalling an increase of more than 40 per cent from last year.

Read more: Indian Army flashes huge tanks at China to remind it what will happen to it in a high-altitude war with India

To counter China on the border, an aggressive India under Prime Minister Narendra Modi is also gearing up to build four new airports and 37 helipads across the Union Territory of Ladakh. The process of land identification and preliminary discussions have been concluded and the next stage would be a joint report by key stakeholders like the DGCA, Airports Authority of India and the Indian Air Force.

While the Indian troops are well acclimatised for the extremely cold and inhospitable winters of Ladakh, the Chinese People’s Liberation Army (PLA) becomes virtually defunct during the winter months. They are no match for Indian troops who know the Himalayan ranges like the back of their hand. While the LAC in Eastern Ladakh remains a daunting location, it is pertinent to note that Indian soldiers have held positions at even greater heights on the Siachen glacier – the world’s highest battlefield and have survived the worse off winters there.

China Trying to Better Prepare Itself for the Upcoming Winters

What China suffered throughout last year was a series of humiliations gifted to it by India’s brave soldiers. What made China’s stay in Eastern Ladakh all the more miserable were the unforgiving and unbearable winter chills. Chinese soldiers were simply unable to stand their ground during the winter months of last year and early 2021. They fell ill frequently, were simply incapacitated for engaging in combat, and gave the Chinese Communist Party the chills with their low morale and sunken physical health.

Now, the CCP wants to project itself as prepared. However, while China has started preparing for the winters only now, India has been at it for the past year. India has been ahead of China every step of the way, and this time around too is set to shock the paper dragon with its decisiveness. Already, China was startled when India occupied strategic heights along with friction points last year. It could not fathom how India was able to conduct such stealth operations right under its nose. So, needless to say, China very well knows what kind of an adversary it faces in India. Yet, it has occupied itself in mere optics and visual gimmicks.