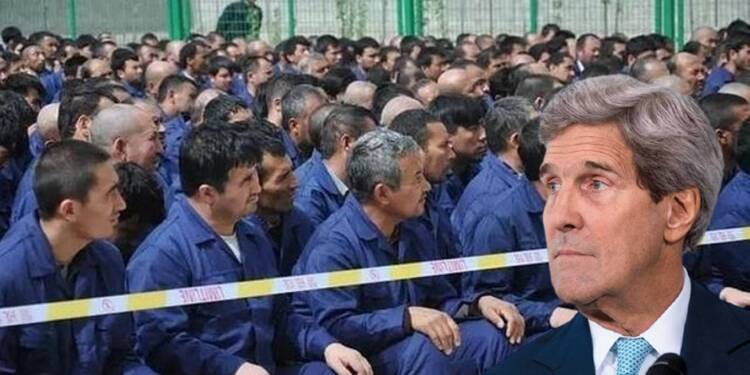 The way in which John Kerry has taken care of the interests of the likes of Iran and China at the expense of the US and its allies is really astonishing. After failing on multiple fronts, now he has admitted defeat. He has given up on the one thing that could have brought Biden out of the shame of being considered a placeholder President.

As per WaPo, before a critical United Nations climate conference in Scotland, John F. Kerry told President Biden that he wouldn’t achieve his goal of tackling climate change, a key administration priority unless the U.S.-China relationship improved. While this sudden surrender would not have made any sense, the revelations regarding John Kerry owning a $1 million stake in an equity fund linked to the exploitation of Uyghur workers gives it all out. It’s obvious that he is making some serious money with investments in Xinjiang and the position he holds has helped him in keeping the US actions against China at low, safeguarding his investments.

The compromised diplomacy of John Kerry

John Kerry, a former secretary of state and Biden’s climate envoy, had been travelling the world trying to secure carbon-emission reduction commitments from allies and adversaries in the hopes of keeping global temperature increases at or below 1.5 degrees Celsius (2.7 degrees Fahrenheit), a level that scientists say could stave off the worst effects of climate change.

However, his talks with his Chinese counterpart, Xie Zhenhua, were dragging because Beijing refused to start climate cooperation because of poor relations over human rights, Hong Kong, Taiwan, trade, and a variety of other concerns. While China wants to force the US to expedite the resolution of all bilateral issues, John Kerry’s giving up on Biden’s climate policy makes the case of China stronger.

The US was trying to pressure China to make more concrete commitments about when it will peak its carbon emissions and to back up Xi’s promise to stop financing coal-fired power stations in other countries. Without these steps, global temperature rises are predicted to exceed 2 degrees Celsius (3.6 degrees Fahrenheit) in the future years, leading to an increase in extreme weather events such as storms, droughts, forest fires, biodiversity loss, and food and water scarcity.

The Chinese private equity fund in which John Kerry has a $1 million holding is not only a large shareholder in a solar panel company tied to Uyghur labour abuses, but it is also a substantial shareholder in a software company blacklisted for human rights violations.

US earlier humiliation under John Kerry

Chinese diplomats have gone as far as diplomatically embarrassing U.S. Presidential envoy and the former Secretary of State John Kerry. Presently functioning as Biden administration’s climate czar, Kerry was supposed to engage in some tough talks with Beijing over the thorny issue of climate change last month. However, an indifferent China openly insulted Kerry.

Even after that, Mr Kerry’s investments in Xinjiang make him more loyal to CCP than to the country he serves in god’s name.

Read more: China reduces Biden administration to a lesser entity than the Taliban

Kerry owns a share in Hillhouse through a trust that his wife is the beneficiary of. They are not involved in investment management, he noted in his statement. Kerry sold many of his energy-related holdings earlier this year, but Hillhouse was not among them, according to a report filed with the Office of Government Ethics in March.

Hillhouse is also a key backer of a tech firm linked to China’s surveillance of Uyghurs, as the Washington Free Beacon first reported last week. Republican senators demanded that Biden dismiss Kerry on ethics concerns after learning of the investment. More information regarding Hillhouse’s assets is likely to raise questions about Kerry’s finances and if he is using his position as climate envoy to obstruct controls on Chinese solar panel imports.

While Kerry has acknowledged that many solar panels are manufactured in Xinjiang with forced labour, he has expressed opposition to any financial limitations or fines on these products. While we can now understand the real reason why Kerry is helping CCP in making sure low intensity of actions against companies functional in Xinjiang, it has not only sent Biden’s climate policy down in the dumps, but it has also made him a supporter of bonded labour, concentration camps and human abuse.