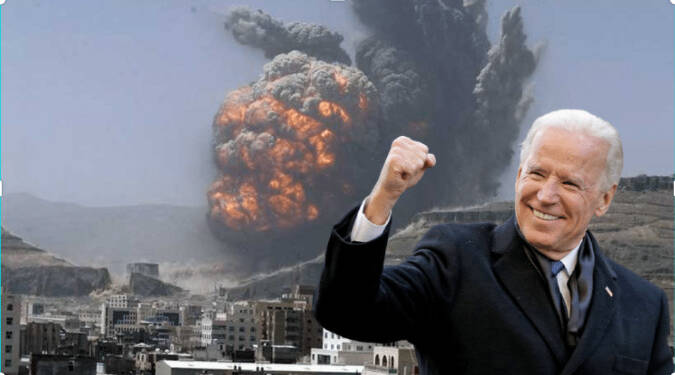 The Yemen war is arguably the bloodiest ongoing war in the world, having already claimed 130,000 lives including 12,000 civilians. The war is a humanitarian disaster for Yemen, which is already the most impoverished country in the Gulf. Yet, the Biden administration is making no real efforts to end the war and is only making it bloodier.

After coming to power, Biden committed a blunder by withdrawing from the Yemen war effort, which has emboldened the Houthi rebels who have now seized control of a strategically located governorate on Central Yemen and are looking to expand their control in the war-torn country. The new Houthi offensive is likely to plunge the Yemen war into a bloodier phase.

Who are the Houthis:

At the most fundamental level, it is essentially related to ethnic divisions in Yemen. The Arab country is a Sunni-majority nation. As per a 2010 CIA estimate, 65 per cent of Yemen’s people are Sunnis and almost 35 per cent are Shi’ites. Minority communities like Jews, Bahais, Hindus and Christians comprise less than one per cent of the total population.

How did Yemen come into being?

Since the ninth century, Zaydi Shi’ites were ruling an erstwhile State located in the region which now forms the northern part of Yemen. However, in 1962, Egypt-backed Yemeni military officers toppled the Zaydi monarchy and established a Republic. In 1990, the then Yemeni President Ali Abdullah Saleh united North and South Yemen and established the Republic of Yemen as we know it today.

Zaydis remained a majority in North and West Yemen, including in the capital city of Sanaa but became a minority community in the whole of Yemen.

How the Yemen war started:

Saleh, a Zaydi Shi’ite, wasn’t particularly in the good books of Riyadh and Washington, D.C. However, he was roughly aligned with both Saudi Arabia and the US. Also, his broad cooperation with the US against al Qaeda after the attack on the USS Cole in late 2000 in Aden drew the Americans closer to him.

Meanwhile, the Houthis led by their leader Hussein al Houthi emerged as a resistance movement against Saleh. They criticised him for two reasons:

Thereafter, in 2003, Bush invaded Iraq and the Houthi movement took off suddenly. The Houthis adopted the slogan- “God is great, death to the U.S., death to Israel, curse the Jews, and victory for Islam.” Yet, the Houthi rebellion at that time was controlled by Saleh with a military crackdown that also resulted in Hussein al Houthi’s death.

Finally, it was the Arab Spring movement seemingly backed by the Obama administration at that time, which resulted in Yemen’s misery. The Houthi movement relied on the Arab Spring and a nationwide rebellion against Saleh to advance the interests of the Zaydi community. However, things took a surprising turn when Saleh got replaced by his Vice President Abdrabbuh Mansour Hadi, a Saudi Arabia-backed Sunni.

The Houthi rebels were, of course, unhappy with Hadi’s rise to power. So, they colluded with their old rival Saleh in 2014 to take down Hadi. The Houthi-Saleh alliance started to assert control over the Yemeni military while dismissing Hadi as a Saudi stooge.

Hadi and Houthis go to war:

The Houthis stormed the capital Sanaa and took control of the city in January 2015. On the other hand, Hadi, who was placed under house arrest, escaped from Sanaa and fled to Aden. He didn’t give up and decided to continue as Yemen’s President.

Meanwhile, rumours of Iran-Houthi cooperation spread quickly and it became clear that Tehran was backing the Houthi rebels against the Saudi-backed Sunni leader, Abdrabbuh Mansour Hadi. On the other hand, Saudi Arabia’s Crown Prince Mohammed bin Salman (MBS) was outraged by the prospect of Iran-backed

Houthis taking over a country on Saudi Arabia’s southern belly. The strategically located Bab al Mandab straits could have fallen into Houthi hands, so Riyadh decided to back Hadi.

The US was ambivalent US Undersecretary of Defense Michael Vickers even claimed in January 2015 that Washington had a productive informal intelligence relationship with the Houthis against al Qaeda. Yet, when it came to choosing between Riyadh and Houthis, Obama had to choose Riyadh. Ultimately, Houthis took control of Northern Yemen where Zaydi Shiites have a majority, whereas the internationally recognised Hadi government controls the southern region.

Meanwhile, Saleh again tried to switch sides in 2017 but was killed days later after his last attempt at flip-flopping.

Over years, the Yemen war has only become more and more complex. Earlier this year, a rather unprecedented flow of Israeli tourists to the Yemeni islands of Socotra – at the behest of the United Arab Emirates (UAE) was reported. Abu Dhabi controls the island of Socotra in the Gulf of Aden and also maintains a military base on the island which is used to collect intelligence on maritime traffic in the Bab El-Mandeb and the Gulf of Aden. Potential Israeli spies and commandoes are thus landing right in the backyard of Houthis with the overt support of the UAE

How Trump tried to stop the war; while Biden escalated it:

Trump was using the ‘maximum pressure’ policy against Iran. He reintroduced CAATSA sanctions against the Shiite nation in 2018 and scrapped the Iran nuclear deal which was signed by the Obama administration. On the other hand, Trump backed Saudi Arabia, the UAE and other allies against Iran-backed Houthis. Trump had a clear agenda- bleeding the Iranian economy and making the Yemen war an unaffordable venture for Tehran. This could have forced Iran to end the war.

However, Biden came to power with some naive policies. He gave up the war effort in Yemen, which emboldened the Houthis. This allowed Houthis to get an upper hand and Iran is using this advantage as strategic leverage against Riyadh.

Currently, Houthis have taken over al-Bayda, a strategically located governorate in central Yemen. al-Badya is a strategic prize for the Houthis as it borders the last three governorates that are still ruled by pro-Hadi forces- Marib to the north, Sheba to the east and Abyan to the south. Al-Badya also borders the al-Dhale and Lahij governorates, which are under the control of the pro-independence Southern Transitional Council, or STC.

Houthis are unlikely to stop now. Marib and Shebwa are home to large oil and gas fields, which contribute highly to the revenues of the Hadi regime and local authorities. Iran and Houthis would believe that they will win the war if they can take control of the two governorates.

There is also no deterrent in place because the Biden administration has withdrawn itself from the region. Yet, any effort by the Houthis to further expand their position will get retaliated by the Yemeni forces which would lead to still further bloodshed.

However, Biden’s policies continue to encourage the Houthi rebels. This is bad news for Yemen that plunges into a bloodier war but probably a piece of good news for the US military-industrial complex which makes billions of dollars in arms supplies to allies like Saudi Arabia for fighting endless wars in the Middle East.