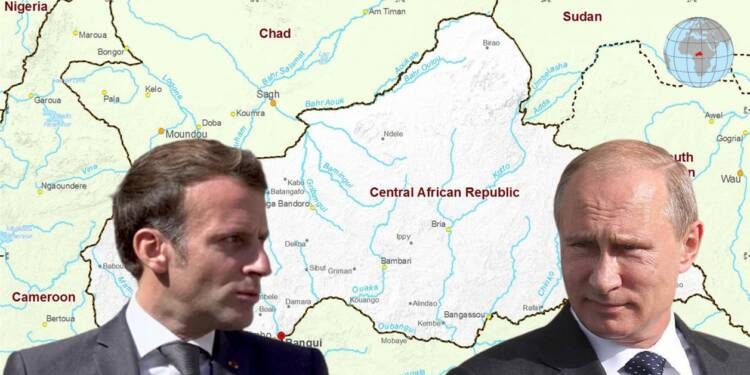 Russia and France, two ambitious and proud civilisations, are on collision course in the Central African Republic (CAR). They are fighting for dominance in the landlocked country bordering Chad, Sudan, South Sudan, Congo, and Cameroon. Russia is trying to shore up the influence of its private military contractors in CAR, whereas France is trying to retain its colonial-era influence in the impoverished country.

As a conflict-hit country, CAR is in really bad shape. In 2019, it had the second-lowest level of human development, ranking 188 out of 189 on the Human Development Index (HDI) and the lowest inequality-adjusted Human Development Index (IHDI), ranking 150th in a list of 150 countries. CAR is also believed to be the world’s unhealthiest country and the worst country for youngsters.

However, both Russia and France are interested in CAR for several reasons:

How the civil war has ravaged CAR

CAR is actually a rich country with significant mineral deposits, but the people of the landlocked country remain extremely poor and impoverished because of a history of conflict, maladministration, and a long civil war.

The ongoing civil war in the Central African Republic dates back to 2012 when rebel groups picked up arms and tried to topple the regime of then-President François Bozizé. The rebels claimed that they were trying to protect a marginalised community from State repression, however, they were actually rebelling against Bozizé’s attempt to take over armed groups’ lucrative mining business.

The Central African Republic has always been prone to sectarian violence and civil wars. The country has historically been a meeting point for different African communities and European colonisers. There is an endless debate about the belongingness and foreign character of certain communities in CAR.

Many people within the Central African Republic remain sceptical of the alleged Arabic origin of certain inhabitants, whom they call “Chadians.” Such xenophobia and identity conflict in CAR keeps it on the edge and at perpetual risk of sectarian conflict.

And then there is this issue of dissatisfaction in the country’s remote areas. Public services are minimal in the peripheral areas of the Central African Republic, and the presence of emboldened armed groups and militias have led to widespread suffering for the civilian population.

Anyhow, the 2012 rebellion did not succeed in overwintering the civilian regime in CAR even though the country’s weak army did not really put up a big fight. Ultimately, international pressure and a peacekeeping mission pushed rebels out of the capital city of Bangui. However, CAR is not safe, and rebels remain active in the country’s hinterland and the preservation of the State remains a lingering issue in CAR.

Pro-government forces in CAR have managed to make some rapid advances in recent months. In February, the pro-government forces also seized a stronghold of former president Francois Bozize. Prime Minister Firmin Ngrebada said, “I hail the capture of the town of Bossangoa by our forces and allies today.”

As per France24, a French State-owned international news television network, “Allies” is a “term used by CAR’s government for Russian paramilitaries and Rwandan troops who are supporting the beleaguered authorities against rebel groups.”

The CAR PM added, “Never again will bandits disturb people in this part of the country.” The capture of Bossangoa is a sign that Russian help is allowing the civilian government in the Central African Republic to reassert control over the country.

Why France is angry

France wants to retain its supreme influence in CAR, which is a former French colony and also a member of the Organisation Internationale de la Francophonie, a group of countries where French is the lingua franca or customary language.

The territory now comprising the Central African Republic was a French colony for 50 years from 1910 to 1960. Like any other colony, France wants to retain its early twentieth-century influence in CAR too. Therefore, when hundreds of Russian military instructors reached CAR to help arm and train government troops in their battle against rebel groups, Paris got enraged.

In June, France suspended aid and military cooperation in the landlocked African country, alleging that the CAR government failed to stop “massive disinformation campaigns” against France. Paris has also cut $12.18 million of budgetary aid for its former colony. The French Armed Forces Ministry also alleged, “A number of commitments made by the Central African authorities vis-à-vis France have not been kept.”

Meanwhile, a group of UN investigators have urged CAR to sever ties with Wagner group, a private Russian military contractor believed to be linked to the Kremlin and President Vladimir Putin. A statement by UN experts read, “We call on the CAR government to end all relationships with private military and security personnel, particularly the Wagner group.”

It added, “We are extremely concerned about intimidation and recent reports of violent harassment by private military and security contractors against individuals and communities.” The UN experts also accused that Wagner officers “have committed rape and sexual violence against women, men, and young girls in the many parts of the country.”

The US too is clearly aligning with its ally France in the ongoing battle for influence between France and Russia in CAR. US envoy to the UN Linda Thomas-Greenfield said, “Russian mercenaries engage in human rights abuses of civilians, extract steep costs in payments and mineral concessions, and deprive local citizens of critically needed resources.”

For some very obvious reasons, Russia and France are on the collision course in CAR, even as the two ambitious powers try to gain maximum possible influence in the African Continent.