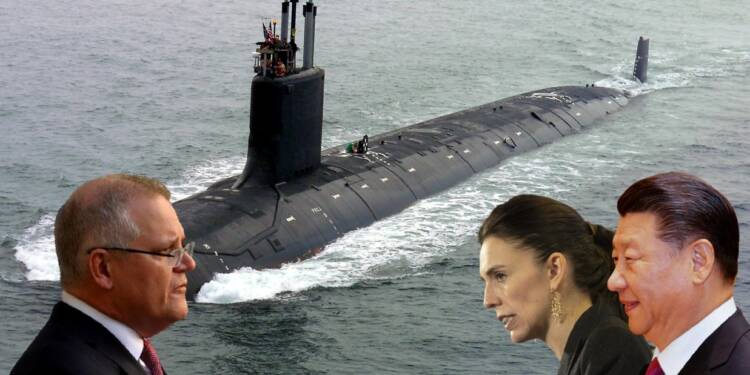 When the US, UK and Australia announced their AUKUS security pact in September this year, New Zealander Prime Minister Jacinda Ardern did not betray her emotions in expressing her displeasure over the development. As soon as the AUKUS was announced, New Zealand hurriedly reiterated its commitment of not allowing nuclear submarines in its waters; essentially banning Australian submarines even before the Australian forces could get a hold of those.

China tries to drive a wedge in New Zealand-Australian ties

This public fallout between the Trans-Tasman partners is now being fully utilized by the shared enemy of the democratic world, China. Chinese ambassadors and diplomats are now stoking nuclear tensions between Canberra and Wellington to ramp up diplomatic pressure on the Scott Morrison administration. China’s deputy chief of mission in New Zealand, Wang Genhua, made some incendiary comments on Monday claiming that Australia will not only acquire nuclear-powered submarines in the coming decades but nuclear weapons.

Wang Genhua also suggested that Australia’s attitude will only help kick start a nuclear arms race in the region. He said that AUKUS would mean “more nuclear arms race … more nuclear tests, and nuclear pollution” in the Pacific. “Australia is going to own nuclear-powered submarines. It will be almost necessary for them to equip nuclear weapons as the next step. The step just couldn’t be prevented,” Wang said. Interestingly, Wang vented all his frustration during an event attended by New Zealander commoners.

But he did not stop there. Going a step forward, Wang added that “It will be like opening a Pandora’s Box, releasing many, many nuclear evils.” The Chinese diplomat also yapped against the US and UK, alleging their glaring role in the “imminent” regional nuclear rivalry. He added, “The promise of US or UK cannot be trusted at all. No international mechanism would restrict US or UK at all. They will just do as they would like to.”

Wang, being a Chinese diplomat, is expected to sow seeds of discord among the democratic allies to stave off its own troubles in the region. The debilitation of people-to-people ties between Australia and New Zealand will only help China’s charm-offensive campaign against Australia in the Pacific. However, a lack of stern response from the Jacinda Ardern administration is quite astonishing and distressing.

While a Chinese diplomat is brazenly attempting to weaken the centuries-old Trans-Tasman partnership, the New Zealand administration seems to have lost all of its senses. Instead, it’s only the questionable integrity of the Kiwi government that has emboldened the Chinese bellicose officials to openly antagonise democratic countries among the New Zealander masses.

The banning of the Australian nuclear submarines by the Jacinda administration seems to have played a big role in China’s brazen diplomatic offence. After the AUKUS pact was announced between Australia, the UK, and the US, Jacinda had made it clear that “New Zealand’s position in relation to the prohibition of nuclear-powered vessels in our waters remains unchanged.”

New Zealand had imposed a ban on nuclear submarines (both powered and armed) from entering its waters way back in 1985. The ban was introduced in the wake of French nuclear testing in the Pacific and led to the US navy banning its warships from entering New Zealand ports for more than 30 years.

Australian Submarines: Not so “nuclear”

Make no mistake, the submarines that the US and UK have pledged to Australia are not even “nuclear.” Those submarines will only be powered by nuclear energy and won’t get armed with nuclear weapons. Scott Morrison, along with the US and UK leaders, have stressed the nuclear-powered submarines Australia intended to acquire in the coming decades would only be equipped with conventional (non-nuclear) weapons, and the countries’ nuclear proliferation obligations will be met.

But the Chinese diplomat, aided by the Jacinda administration, conveniently concealed the fact from the audience. New Zealand’s ban on nuclear submarines is three-decade-old, and it doesn’t reflect today’s security dynamics of the region. Jacinda reiterating New Zealand’s commitment towards maintaining a nuclear ban in its waters shows her oblivion towards the rising ‘China Challenge’.

Chinese media has been calling upon its government to devise nuclear attacks against Australia should it intervene in China’s military aggression against Taiwan. Moreover, Chinese research vessels have been sailing around Australian waters of late, ramping up security challenges not just for Canberra but also for the tiny pacific nations that look up to Australia and the democratic world for acting as a bulwark against the Chinese belligerence. 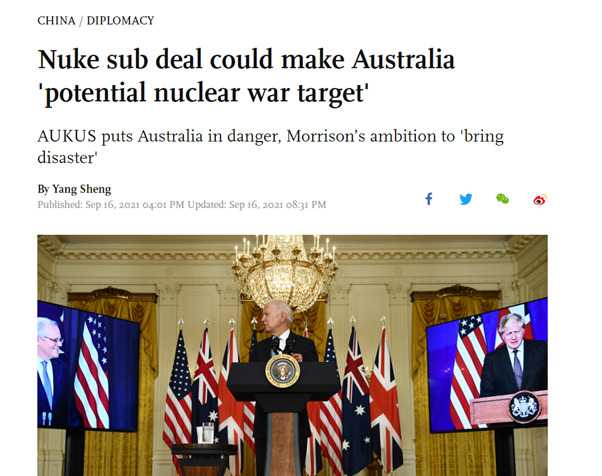 Indeed, China has emerged as the greatest nuclear threat for the peace-loving nations in the region. And for deterring the Chinese communist party from even thinking about launching a nuclear attack against any country, it is vital to prepare for the worst, not only for Australia but also for nations like New Zealand. Hence, instead of stymieing Australia’s efforts to fortify itself against belligerent China, Wellington should strive to contribute towards peace-building efforts.

African military regimes are chasing China out of Africa