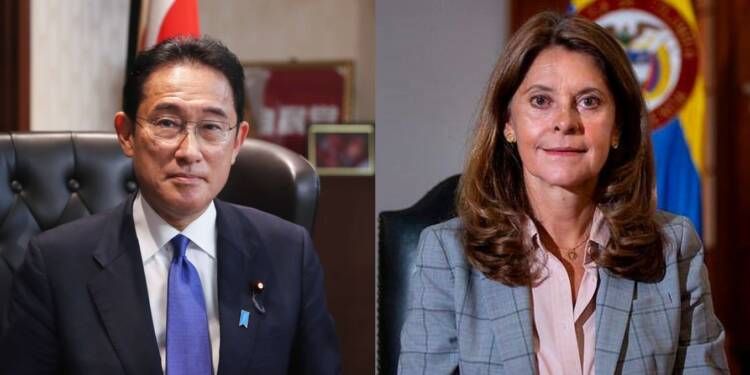 Colombia has asked Japan to join the Pacific Alliance – In the past couple of decades, the economic heft of China has increased in direct proportion to its expanding geopolitical influence over larger geographies, be it Africa, or even South America. As per a September 24 report, an investigative feature published by the Associated Press (AP) and the Univisión network, revealed that Chinese ships are increasing their presence in the Pacific waters off the coast of South America, with practices that raise alarms about illegal, unreported, and unregulated (IUU) fishing. Now as the Chinese influence in the region is increasing and the US under Joe Biden is not interested in securing the USA’s areas of influence, the South American countries are looking at other major powers to balance the growing Chinese influence in the region.

The Vice President of Colombia has asked Japan to join the Pacific Alliance, four Latin American countries led trade block that aims at expanding exports to Asia. This comes after Japan has been consistently building up its alliance with these Latin American countries be it Shinzo Abe or Yoshihide Suga or else the current Prime Minister Fumio Kishida. As recently as July, Japanese Foreign Minister Toshimitsu Motegi visited four Central America and Cuba to help the U.S. counteract Chinese influence in Washington’s backyard.

China’s increasing influence in the region

As per the above-mentioned report, 30 Chinese-flagged fishing vessels were identified and 24 of them were accused of abusive labour practices or of violating maritime laws. In addition, they discovered that 16 vessels were sailing with their transponders turned off or transmitting different electronic IDs that did not match the vessel’s name or location, in addition to other patterns associated with illegal, unreported, and unregulated (IUU) fishing. According to the investigation, six ships belong to companies accused of forced labour (slavery), including the Chang Tai 802, whose Indonesian crew said that they have been at sea for four years.

Only just in the last decade, the number of Chinese-flagged vessels engaged in giant squid fishing in the South Pacific increased almost tenfold, from 54 active vessels in 2009 to 557 in 2020, the report said, and the scale of fishing increased from 70,000 to 358,000 tons. The Chinese fleet can fish for years at a time because it unloads its nets at sea into giant refrigerated tankers, capable of carrying more than 15,000 cubic meters of fish (equivalent to six Olympic swimming pools) as per AP. In such a situation, observing the retreating US under Joe Biden, Colombia has asked for Japan’s assistance in the region to counter CCP’s increasing loot and destruction of the region oceanic life.

Japan’s countermeasures in the Pacific against China

Japan too on its side has been working to consistently counter the Chinese influence in the region, as the US takes the back seat. Earlier in July, according to the Japanese Foreign Ministry, the then Prime Minister Yoshihide Suga held separate phone conversations with the leaders of six Pacific Island nations (Fiji, Kiribati, Palau, Papua New Guinea, Tuvalu, and Vanuatu), urging them to join Japan’s efforts to achieve a free and open Indo-Pacific area. Suga pledged Japan’s continuing cooperation in combating the COVID-19 epidemic to the six nations, while also promising a “safe and secure” Tokyo Olympics in less than a month, according to the ministry.

The Prime Minister also addressed Japan’s funding for infrastructure projects and renewable energy with the six Pacific islands’ leaders, asking for their support in Tokyo’s attempts to achieve the return of Japanese people abducted by North Korea in the 1970s and 1980s, according to the ministry. After the meeting, it was announced that Japan will provide the Pacific Island nations and territories with 3 million Covid-19 vaccine doses through the UN-backed COVAX global vaccine sharing program. Following this, Japan has followed a consistent foreign policy vis a vis countering Chinese influence in the Pacific Ocean and South America.

Late last month, Russia’s Rosoboronexport director general Alexander Mikheyev affirmed Moscow’s readiness to supply the armed forces of Peru with the latest fighter aircraft, if and when it makes a formal request. According to TASS, Russia could provide Peru with as many Mil-171Sh helicopters as needed to effectively carry out military tasks. Going ahead and beyond, Russia is also willing to train Peruvian specialists in operational capacities.

Moscow is also reportedly willing to help upgrade Peru’s existing warplanes, which are mostly of Russian origin. It boasts a fleet of multi-role Mikoyan MiG-29 fighters, Sukhoi Su-25 jets, and Mil Mi-171Sh-P military transport helicopters. This offer comes at a time when these South American countries are finding it difficult to take on China in Washington’s absence.

Now, with a confident majority to the ruling Liberal Democratic Party in Japan, Colombia is betting on Japan to join the Pacific alliance and enable the regional players to voice their discontent towards the Chinese Communist Party as well as take on the China challenge as and when the need arises.