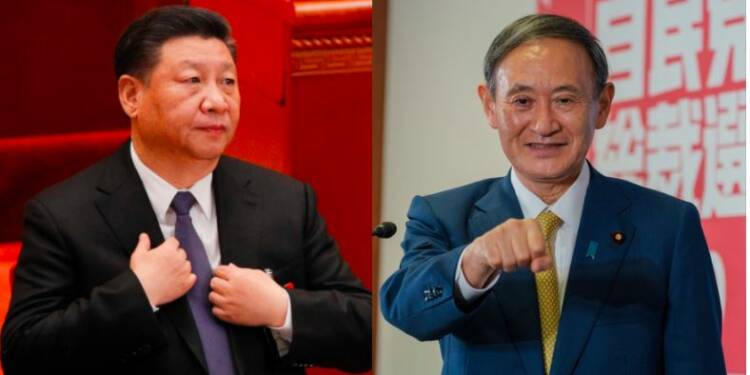 Yoshihide Suga, the Japanese Prime Minister has been actively rounding up allies across the world to take a stand against China. He is on the move again, as he tries to drum up support in the Pacific island nations for Free and Open Indo-Pacific (FOIP).

Suga pledged Japan’s continuing cooperation in combating the COVID-19 epidemic to the six nations, while also promising a “safe and secure” Tokyo Olympics in less than a month, according to the ministry.

The Prime Minister also addressed Japan’s funding for infrastructure projects and renewable energy with the six Pacific islands’ leaders, asking for their support in Tokyo’s attempts to achieve the return of Japanese people abducted by North Korea in the 1970s and 1980s, according to the ministry.

With Australia at its side, Japan has successfully pushed an anti-China stance in the G7. Moreover Japan has also forced the China loving US President Joe Biden to take a firm and supportive stance on Taiwan. Japan has also been involved in emboldening states in the South China Sea such as Vietnam to take an even harder stance against Chinese belligerence.

The conflict between Australia and China has been extensively documented. China has attempted to punish Australia with unilateral penalties since Australia demanded for an open and independent probe into the Coronavirus discovery in Wuhan, but these have backfired.

Furthermore, relations between the two countries are at an all-time low, with diplomatic engagements halted. Even Australian citizens’ trust in Beijing has plummeted to new lows.  According to a report published on June 21, 63% of Australians now perceive China as a threat, up from 41% and 12% in 2018.

The Pacific islands are crucial to Tokyo’s economic and security interests, according to the Japanese Foreign Ministry. China has lent money and offered development support to projects in the region, such as the construction of infrastructure.

For a long time, China has been pushing to gain significant influence in the Pacific island states. China has invested heavily in the region. Kiribati has been a major beneficiary of Chinese investments. Apart from investing 8 million US dollars in a fish processing plant in Kiribati, Chinese companies have been involved in every other sector of the Kiribati economy. And today, it has managed to make the Island nation a Belt and Road Initiative Partner (BRI). Moreover, China also has plans to revive a strategic Pacific airstrip in Kiribati. But with sustained efforts from Australia, the Maamu administration of Kiribati is facing opposition for letting China go ahead with its plans to militarize a remote Kiribati island.

Apart from Kiribati, Solomon Islands have also seen major investments pour in from China. Samoa was also one of the beneficiaries and a pro-China leader defended Chinese interests in the nation, however, after the recent elections, the new Prime minister elect Fiame Naomi Mata’afa has promised to put an end to Chinese projects worth a $100 million.

In Fiji, Chinese influence increased in relation to their investments, however the Covid-19 pandemic changed the dynamics. Australia in an attempt to deter any lingering Chinese influence had sent 200,000 doses of the AstraZeneca vaccine, whereas China’s support was limited to comforting statements and empathy.

Much surprising was New Zealand lending its support to Japan and Australia, in their bid to counter Chinese influence. For the whole of last year New Zealand’s Prime Minister Jacinda had defended China and had even refused to label its actions in Xinjiang as genocide, unlike its other five eyes allies. However, as reported by TFIGlobal in May, Australia had undone all the influence China had. And its latest actions show that New Zealand is once again part of the push against China.

Australia has been a major obstacle to China’s influence in the Pacific island region. With a $500 million package aimed at achieving ‘full immunization coverage’, Australia was able to keep hold of the Pacific island nations. But now with Japan and New Zealand on its side and pushing for FOIP, a more resolute alliance is on the cards.