It took years for Xi Jinping to grab New Zealand, Australia has undone all his efforts in just weeks 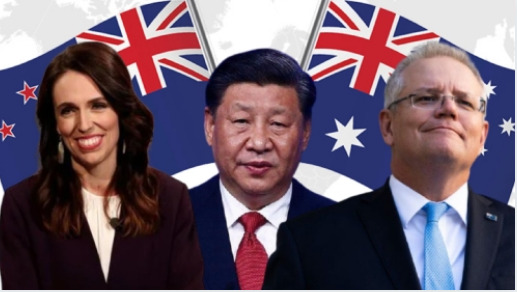 The Chinese Communist Party and Xi Jinping investing a lot of financial and human resources in making New Zealand its stooge is turning out to be a bad investment. The latest visit by the Australian Prime Minister and the diplomatic actions by the Australian government in the backdrop of this visit has undone all the efforts by Beijing within weeks. New Zealand has thrown its support behind Australia’s ongoing trade dispute with Beijing in a significant political signal that the trans-Tasman allies remain unified in dealing with China’s economic coercion and growing influence in the region.

Prime Minister Scott Morrison’s journey to Queenstown for crucial bilateral meetings with his colleague, Jacinda Ardern, coincided with the New Zealand government’s decision to be a partner in the World Trade Organization dispute over hefty duties on barley imports. China’s rising assertiveness in the Indo-Pacific will be the focus of the talks. The two leaders touched noses and foreheads in a Maori “hongi” — a traditional indigenous welcome which is a symbol of unity and “sharing the breath of life” for the first time since February last year prior to both nations slamming closed their borders.

Earlier this year, In an effort to reduce trans-Tasman tensions, the Minister of Trade of New Zealand phoned his Australian counterpart when he suggested Canberra to “show respect” and behave more diplomatically towards China. Damien O’Connor, the NZ minister, had angered some Australian government members with remarks he made in a Wednesday television interview when asked about his country’s offer to mediate between Canberra and Beijing. After signing an upgraded free trade agreement with China, O’Connor said NZ had a “mature” relationship with Beijing and had “always been able to raise issues of concern”. “I can’t speak for Australia and the way it runs its diplomatic relationships but clearly if they were to follow us and show respect, I guess a little more diplomacy from time to time, and be cautious with wording then they, too, hopefully, could be in a similar situation,” O’Connor told CNBC earlier this year.

Jacinda Ardern tried to make the maximum gains in the short term, by backstabbing the Five Eyes partners and making extra efforts to kowtow to China and Xi Jinping. However, now as the country is expecting a storm approaching, she finds her country alone and unprepared for the impact. And realising this, her government has given in to the subtle suggestion of the Australian government. Mr Morrison dismissed the claims that the alliance was fracturing over disagreements over how to approach China. Relations between the two countries have been strained in recent months, with Australian officials saying they were caught off guard by Wellington’s unwillingness to put pressure on Beijing on trade and human rights issues. On Sunday night, he stated that both the countries were dedicated to a “free and open Indo-Pacific.”

“We are Five-Eyes partners, I mean we are part of ANZUS. We are and have been alongside each other in favouring a world that favours freedom for a very long time,” Mr Morrison said. The New Zealand government declared hours before Mr Morrison’s arrival that, despite not being invited to join the WTO case, it would participate since the dispute would be crucial to the effective operation of the international rules-based trading system.

Ms Ardern said on Sunday evening that as two sovereign nations New Zealand and Australia will not always see every issue in the same way and “often will see and do things differently.” “(But) in an increasingly complex geo-strategic environment family is incredibly important, and Australia, you are a family,” Ms Ardern told a room full of trans-Tasman business leaders.

The subject of how to deal with Beijing’s growing aggressiveness has become a thorny issue in the trans-Tasman partnership, with numerous recent public statements from New Zealand ministers aggravating the Morrison administration. However, with just one visit, Australia has undone all the efforts Xi Jinping put to grab New Zealand within just weeks.

American leftist media dismissed Donald Trump’s lab leak claim as a joke. Now they are forced to admit that they were wrong