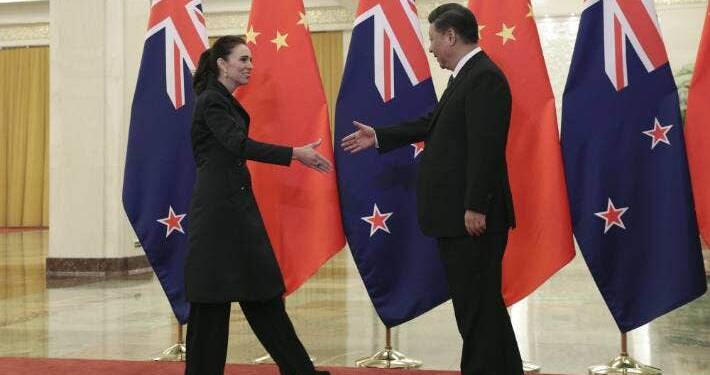 Jacinda Ardern’s China love was on full display to the world again. While the Chinese government works on upgrading its relationship with Wellington, Aussie-Sino relations remain frozen. In a bid to thaw the relationship between these states, Arden’s trade minister called Canberra and asked it to “show respect” towards China.

China-Aussie relations have taken a turn for the worse ever since the pandemic hit. Australia’s comments for an open international investigation started a debacle in diplomacy between the two states. It further exaggerated as Beijing imposed unofficial trade sanctions to hurt Australia but to no avail. Despite sharing a special relationship, New Zealand refused to criticise China on its animosity on its ‘friend across the ditch’. And now evidently trying to please its Chinese friends & have called Australia to “show respect” to the Chinese.

In an effort, to reduce trans-Tasman tensions, the Minister of Trade of New Zealand phoned his Australian counterpart when he suggested Canberra to “show respect” and behave more diplomatically towards China.

Damien O’Connor, the NZ minister, had angered some Australian government members with remarks he made in a Wednesday television interview when asked about his country’s offer to mediate between Canberra and Beijing.

After signing an upgraded free trade agreement with China, O’Connor said NZ had a “mature” relationship with Beijing and had “always been able to raise issues of concern”.

“I can’t speak for Australia and the way it runs its diplomatic relationships but clearly if they were to follow us and show respect, I guess a little more diplomacy from time to time, and be cautious with wording then they, too, hopefully, could be in a similar situation,” O’Connor told CNBC on Wednesday.

The saga coincides with Chinese state media calling on Australia to follow New Zealand’s lead in how it deals with Beijing rather than being “filled with hostility toward China’s rise” and making “wrong judgments”.

The remarks, closely echoing Chinese government concerns, are likely to outrage Canberra, thus exposing New Zealand and its “Five Eyes” intelligence allies Australia, the US, Canada and Britain to their different approaches to China.

The conservative approach of New Zealand was evident in its unwillingness to sign joint declarations by Five Eyes partners which have criticized China’s crackdown on the democracy movement in Hong Kong, including the recent arrests of city activists.

Unlike their US and Australian counterparts, New Zealand officials have also been cautious not to specifically challenge China’s increasing dominance in the Pacific. Critics contend that Wellington’s China policy places economic gain above democratic principles, which the government of New Zealand has refused.

Dr Jeffrey Wilson, a trade expert who is the research director of the Perth US-Asia Centre at the University of Western Australia, was disappointed with O’Connor’s statements. Wilson said, “By echoing comments made in the Global Times, the New Zealand trade minister is deliberately criticising Australia to play to a Chinese audience”.

Even while China use economic measures and trade tariffs to foment trouble for the free world in general and Australia in particular, Ardern refused to criticise China and instead offered to mediate between Canberra and Beijing.

In December last year New Zealand’s Foreign Minister Nanaia Mahuta had said that hosting the high-profile Asia Pacific Economic Cooperation (APEC) summit next year presented an opportunity for Wellington to bring both China and Australia to the table.

Mahuta said, “Do I believe there might an opportunity for New Zealand to create a different environment and have a conversation? Yes, I do.” She added, “Hosting APEC might well be the opportunity … but both parties will have to be willing to come together and concede in some areas where they are currently not Seeing Eye to eye.”

Mahuta’s remarks suggested that China and Australia are both equally important to the tiny island state. These remarks came as members of the global Inter-Parliamentary Alliance on China (IPAC) penned an open letter to their Foreign Ministers calling upon them to express “full solidarity and support for the Australian people in this challenging time”. New Zealand was also a signatory.

Australia and New Zealand are called “friends across the ditch”, share the same heritage and values and are allies in the world’s most powerful intelligence-gathering body- the Five Eyes Alliance. However, New Zealand refuses to stand by Australia and to oppose rising Chinese influence in Oceania. Instead, Jacinda preferred the friendship between Sino and Kiwi.

Even CCP’s mouthpiece praised Wellington for being ‘relatively open’ toward “the rise of China”- the highest of praises from the Chinese media, for being a Chinese lackey. By contrast, the Australian government had displayed “a re-energised Cold War mentality” and added to diplomatic tensions through a series of actions including hyping up the notion of China being a threat and passing laws against foreign interference in 2018.

The latest err of diplomacy by New Zealand’s trade minister has clearly displayed where Ardern’s loyalty lies. Calling for its oldest and most trusted partner to show respect to a belligerent state is a clear indication that New Zealand has replaced Australia with China.

Criticise Biden administration at your own risk, a popular memer got ten years of rigorous imprisonment for making a meme