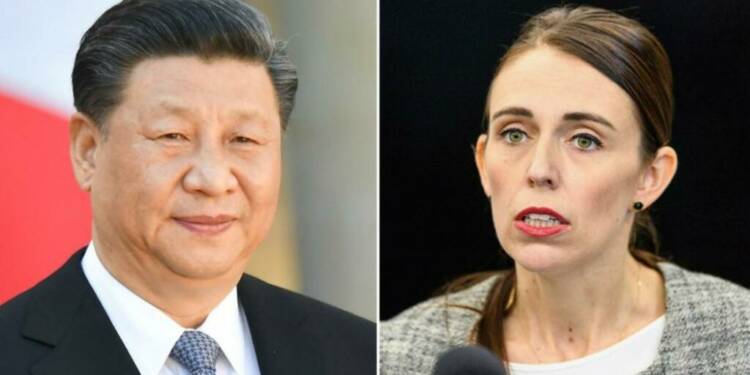 Australian, U.S., British and Canadian Ministers of Foreign Affairs made a joint statement expressing “serious concern” over the detention in Hong Kong last week of 55 Democracy activists and supporters. But the most notable absentee was New Zealand’s Jacinda Ardern. Her absence showcased that New Zealand has succumbed to China’s pressure.

The four foreign ministers on Sunday in their joint statement said, “It is clear that the national security law is being used to eliminate dissent and opposing political views.”

The four foreign ministers said candidates reflecting a variety of political views should be included in the next legislative election. By popular vote, just half the town’s legislature is elected.

Read More: Jacinda fails the Five Eyes loyalty test as we predicted. Trudeau could be next

“We call on the Hong Kong and Chinese central authorities to respect the legally guaranteed rights and freedoms of the people of Hong Kong without fear of arrest and detention,” they wrote.

The statement was signed by Marise Payne of Australia, Francois-Philippe Champagne of Canada, Dominic Raab of the UK and Mike Pompeo of the US.

The intelligence priorities of major democratic powers are becoming more centred on Asia and China.

In November, when the Five Eyes criticised China for disqualifying four Hong Kong lawmakers, Chinese Foreign Minister Zhao Lijian had said, “No matter how many ‘eyes’ you have, be careful not to be poked and get blind by harming China’s sovereignty, security and development interests.”

Thus, it seems that Chinese threats have seemed to work in New Zealand. Instead of presenting a solid unified stand against China, New Zealand opted to cower in face of China’s aggression.

While the whole world, especially the United States under the leadership of Donald Trump has been putting immense pressure on China for its crackdown on Hong Kong and its intrusions in Taiwan, Ardern’s refusal to join in the efforts seems like she has chosen to stay mum, to be diplomatic even while its most trusted ally in its Neighbour Australia suffers at the hands of Chinese belligerence.

Read More: Trump, Johnson and Morrison give a tough test to Jacinda and Justin to prove their allegiance to the free world

There have been earlier instances where New Zealand’s commitment to the Five Eyes has been questioned. In December, New Zealand’s Foreign Minister Nanaia Mahuta said that hosting the high-profile Asia Pacific Economic Cooperation (APEC) summit next year presented an opportunity for Wellington to bring both China and Australia to the table.

At the time, Australia and China had both been engaged in an intense trade stand-off which had spilt over diplomatically. At the time, Mahuta said, “Do I believe there might an opportunity for New Zealand to create a different environment and have a conversation? Yes, I do.”

She added, “Hosting APEC might well be the opportunity … but both parties will have to be willing to come together and concede in some areas where they are currently not seeing eye to eye.”

Read More: Trudeau and Ardern: The two insiders who are openly compromising the Five Eyes group at the behest of China

Mahuta’s remarks seemed to suggest that for New Zealand, both China and Australia are equally important. This is why she wants to ensure that they “come together”. Worse still, the Kiwi Foreign Minister made these remarks as members of the global Inter-Parliamentary Alliance on China (IPAC) penned an open letter to their Foreign Ministers calling upon them to express “full solidarity and support for the Australian people in this challenging time”.

Ardern’s reluctance to stand up in solidarity with Australia, considering the special relationship which the two countries share was a sign of Chinese influence over New Zealand.

The Five Eyes must lead the world’s free struggle against China as a communist-authoritarian giant. But for New Zealand, the rot has clearly set in, which may also ruin attempts to corner the paper dragon.

New Zealand’s absence in the joint statement is clearly a sign that Ardern is either very inclined to get Chinese businesses or is scared of China, but whatever may be the reason, at a time when a unified front was needed, Ardern backed out, which seriously questions New Zealand’s commitment to democratic principles and its alliance with other major democracies.