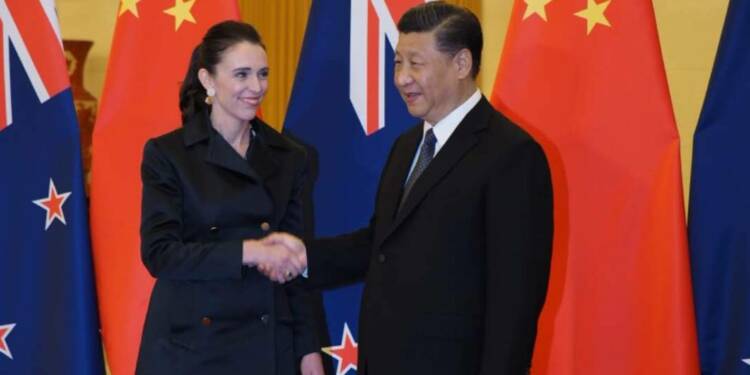 On Monday, we at TFIGlobal predicted that Scott Morrison, Boris Johnson, and Donald Trump had laid down a tough test to test the loyalties of doubtful Five Eyes leaders- Jacinda Ardern and Justin Trudeau. As China uses economic measures and trade tariffs to foment trouble for the free world in general and Australia in particular, Morrison, Johnson and Trump wanted the Five Eyes Alliance to stand together and take on China.

However, New Zealand and Canada have shown signs of succumbing to the Middle Kingdom in the past. And therefore, the latest proposal doing rounds within the Five Eyes Alliance was a test for checking the loyalties of Jacinda and Trudeau. However, Jacinda has already failed the Five Eyes loyalty test, and Trudeau might follow soon. New Zealand has refused to stand by its special friend, Australia and has instead offered to mediate between Canberra and Beijing.

On Tuesday, New Zealand’s Foreign Minister Nanaia Mahuta said that hosting the high-profile Asia Pacific Economic Cooperation (APEC) summit next year presented an opportunity for Wellington to bring both China and Australia to the table.

Mahuta said, “Do I believe there might an opportunity for New Zealand to create a different environment and have a conversation? Yes, I do.” She added, “Hosting Apec might well be the opportunity … but both parties will have to be willing to come together and concede in some areas where they are currently not seeing eye to eye.”

So, Mahuta’s remarks suggest that for New Zealand, both China and Australia are equally important. This is why she wants to ensure that they “come together”. Worse still, the Kiwi Foreign Minister made these remarks as members of the global Inter-Parliamentary Alliance on China (IPAC) penned an open letter to their Foreign Ministers calling upon them to express “full solidarity and support for the Australian people in this challenging time”.

Needless to mention, the Jacinda Ardern administration should have expressed solidarity with Australia, rather than offering to mediate and diffuse Sino-Australian tensions. And we are not saying this just because the IPAC has demanded solidarity towards Australia, but also for the sake of the special relationship between Australia and New Zealand.

Wellington and Canberra share far too much in common for Jacinda to openly do China’s bidding. The Kiwi-Australian ties are founded on World War I battlefields and have been historically described as “special”. Also referred to as Trans-Tasman relations, the relationship between Australia and New Zealand has remained really strong for several decades.

Today, Australia and New Zealand are called “friends across the ditch”, in a broad reference to the 2,000km-wide (1,240 miles) Tasman Sea, situated between the two countries. Wellington and Canberra are also supposed to share the same heritage and values. Both of them share a British colonial heritage and were settled colonies. Today, they are, of course, allies in the world’s most powerful intelligence-gathering body- the Five Eyes Alliance.

But New Zealand has simply refused to stand guard with Australia and resist growing Chinese influence in Oceania. Jacinda has instead chosen to play up the Sino-Kiwi relations. Mahuta herself highlighted that New Zealand’s whakapapa, or kinship connections, go back to Asia. She added, “That enables us to navigate our relations with China perhaps a little differently than other countries.”

So, Jacinda has clearly failed the Five Eyes loyalty test. New Zealand has failed to show its intent when it comes to taking on the paper dragon. Now, the focus shifts to the other doubtful leader within the Five Eyes- Justin Trudeau. And given his uninspiring track record, it seems Canada’s Prime Minister will fail as spectacularly as his Kiwi counterpart.