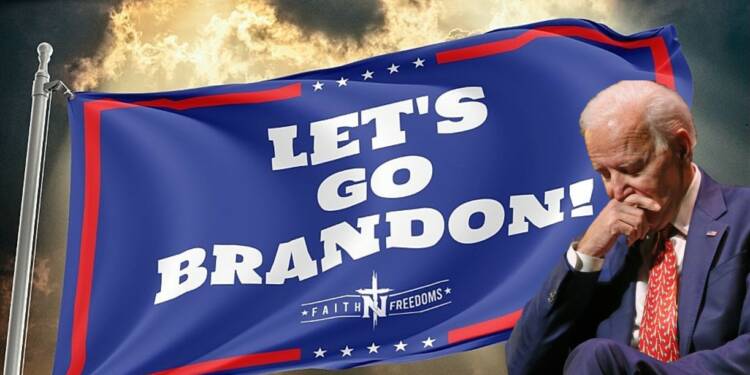 Let’s Go Brandon : The United States of America has a glorious history of holding incumbent Presidents and their administrations accountable for all that they do. Especially in the era of Donald Trump – which by the way, is far from over, Democrats took to viciously attacking the former President. They insulted, denigrated and personally attacked him in the most distasteful of ways. Now, the tables have turned – and Republicans, Conservatives and American patriots at large are returning the favour with equal, if not more fervour.

Americans have grown a new hobby. They now say “Fuck Joe Biden!” at the drop of a hat. However, being shameless and biased as it is – mainstream American media recently sought to shield their master from the public’s outburst of anger against the Democrats.

Here’s how “Let’s Go Brandon” started. The craze began after an NBC Sports reporter at a NASCAR race in Alabama covered up abuses hurled at Joe Biden and replaced the profane chant by the fans as an expression of support for driver Brandon Brown. The reporter suggested they were chanting “Let’s go, Brandon” to cheer the driver. But it became increasingly clear they were saying: “Fuck Joe Biden.”

Now, the cover-up attempt by the NBC journalist has turned into a national sensation. As if to mock mainstream, Democrat-supportive media, Americans are now chanting “Let’s Go Brandon” at a mass level. The slogan is being printed on T-shirts, posters and practically everything printable. The best part is, Democrats are not liking it a tad bit.

When President Biden visited a construction site in suburban Chicago a few weeks ago to promote his vaccinate-or-test mandate, protesters deployed both the “Brandon” version and the original chant. A group chanted “Let’s go, Brandon” outside a Virginia park when Biden made an appearance on behalf of the Democratic candidate for governor, Terry McAuliffe. However, Democrats were most outraged when on a Southwest flight from Houston to Albuquerque, the pilot signed off his greeting over the public address system with “Let’s Go Brandon.”

Liberals and Democrats are not happy with the mass appeal that “Let’s Go Brandon” is fetching. According to Reason.com, some liberal media figures have decided that the comparatively mild “let’s go Brandon” chant is an essentially violent utterance. Asha Rangappa, a commentator for CNN, said it was akin to making a pro-ISIS statement.

Another CNN analyst, Juliette Kayyem, who is a Harvard professor, said the passengers on that flight should file complaints with the Federal Aviation Administration. Meanwhile, ‘progressive political strategist’ and commentator Chris Hahn accused the pilot of “sympathizing with terrorist[s].” CNN’s Joe Lockhart attacked Southwest for not immediately firing the pilot. The airline is investigating the incident.

say what you will but bizarrely encouraging someone to say "long live ISIS" on an airplane is extremely on brand for an FBI agent pic.twitter.com/PLACtTiMM3

If @SouthwestAir doesn’t do anything, every passenger on that flight has standing to file a complaint with the @FAANews and they should do so. Southwest will then be compelled to investigate or defend him. Have fun with that. No messing around in the air. Bright line rule. https://t.co/L7VlZWJ0SU

The Hypocrisy of Democrats and Liberals

The entire “Let’s Go Brandon” fiasco has done a magnificent job at exposing the blatant hypocrisy of Liberals and Democrats. When Donald Trump was President, Democrats hurled the choicest of abuses at the man. They even declared an entire movement called “Not My President” to convey how Donald Trump was an illegitimate President.

Read more: Biden knows that Democrats will lose 2022 Mid-Terms and he has a scapegoat ready

Now, when Joe Biden is at the receiving end of abuses and distasteful comments, Democrats are behaving like a headless chicken. Joe Biden’s actions have been disastrous, and Americans do not like their President a bit. The United States – which claims to be the leading democracy in the world and a beacon of liberty, under Democrats’ insidious rule – is becoming a country where citizens are not allowed to express their thoughts and where Americans’ first amendment rights have gone for a complete toss.

Democrats, who claim to be the mantle carriers of free speech are ironically the ones who are brazenly attacking the very concept without an iota of shame. Such is their intolerance, that a mere phrase like “Let’s Go Brandon” has put their pants on fire.

What is the full form of ANCH? With Definition