After Japan, Australia vows to go to war with China over Taiwan 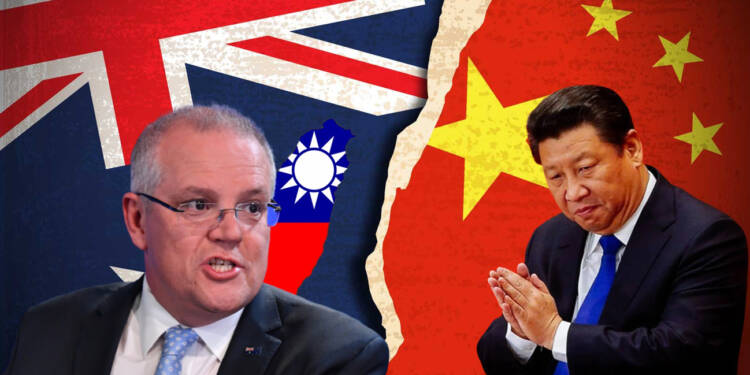 “The rally around the flag” strategy is the new fail-safe of the stumbling Chinese President. China is orchestrating a crisis in Taiwan Strait to fuel nationalistic sentiments among dispirited masses and shore up sinking fortunes of the CCP. But if Australia’s resolute to defend Taiwan in any case of Chinese adventurism is any indication, China will be doing more harm than good to its own interests by invading Taiwan.

Japan has already made its willingness to bid adieu to its pacifist constitution very clear. Also, Japan has linked the issue of Taiwan’s security to that of its own, thus increasingly giving China the impression that an attack on Taiwan will be considered an attack on Japanese sovereignty. But making things worse for China is Australian Prime Minister Scott Morrison, whose administration has now sent a loud and clear message to China—should it dare to lay a siege to Taiwan, Australian missiles and submarines will make it a point to mercilessly decimate the inflated Chinese ambitions.

Peter Dutton goes all out against China:

Consider Australian Defence Minister Peter Dutton’s recent statement on Taiwan. He made it clear, without betraying his anger against China, that it would be “inconceivable” for Australia not to join the United States should Washington take action to defend Taiwan. Dutton told the Australian newspaper on Saturday, “(China’s) been very clear about their intent to go into Taiwan and we need to make sure that there is a high level of preparedness, a greater sense of ­deterrence by our capability, and that is how I think we put our country in a position of strength”.

And that becomes more important in the face of the Biden administration pledging to defend Taiwan over the past few weeks. On Wednesday, US Secretary of State Anthony Blinken had said the United States and its allies would take unspecified “action” if China were to use force to alter the status quo over Taiwan. So, Australia’s commitment to defend Taiwan coming close on the heels of Blinken’s announcement leaves no room for ambiguity, not only for Beijing but also for the Biden administration, which has time and again shown hesitancy in pledging for Taiwan’s defence.

But Australia has remained always clear in its approach. It will come to rescue the island, no matter how grave the ramifications are. Recently, Australia’s former Defence Minister Christopher Pyne had also warned that Australia will likely be dragged into a war with China in the next five to ten years. Frankly speaking, Australia is the biggest hurdle in China’s ambitions of unifying Taiwan with its own territories. Australia not only realises the imminent threat of Chinese aggression against Taiwan but consistently stands up to Beijing’s belligerent policies. With Morrison at the helm of affairs in Canberra, the ‘One China Principle’ will always remain a mere fantasy.

Such is the extent of China’s jittering over Australia’s resolution that the bellicose state media of China has even issued nuclear threats to Canberra should Canberra decide to impede China’s Taiwan-Unification efforts. In an op-ed penned by its Chief editor Hu Xijin, Global Times had recently asked his government to devise a plan against Australia that “should include long-range strikes on the military facilities and relevant key facilities on Australian soil if it really sends its troops to China’s offshore areas and combats against the PLA.”

Read More: As US leaves Taiwan, Australia comes to its rescue

Speaking at the National Press Club in Canberra on Wednesday, Keating appeared to be suggesting that embroiling itself in the conflict between Taiwan and China was not in Australia’s interests. He had even warned the Australian government that “China is now so big and is going to grow so large it’ll have no precedent in modern economic or social history and therefore.” Keating had also mocked the recently concluded AUKUS security pack of Australia with the UK and the US by saying that “eight proposed nuclear submarines will be like “throwing a handful of toothpicks at the mountain.”

As a result of Paul Keating’s scathing assessment of Australia’s China policy, Scott Morrison and Peter Dutton doubled down on Australia’s hawkish China stance by stating that “it was not impossible to ostracize China on world stage.”

China shoots itself in the foot by helping enemies better arm themselves:

It is equally noteworthy how both Japan and Australia are harnessing China’s unabated intimidation of Taiwan for their own advantage. Japan, for instance, is looking all set to get rid of its pacifist constitution. Banking on the burgeoning Chinese menace, Conservatives in Japan has finally seemingly convinced Japanese voters for ramping up the country’s defences. Similarly, acquiring nuclear-powered Submarines has had remained a contentious issue in Australian politics. However, the way how Canberra positioned itself to pull off the deal without significant local opposition embodies rising consensus in Australia over the China issue.

China’s brazen intimidation of Taiwan has only provided its enemies with the fortune moment of better arming themselves. Those previously considered as doves on China are today emerging as the biggest hawks of Beijing’s policies. Not Trump, not Modi, not Shinzo Abe and not Scott Morrison, the only deserving candidate for the due credit of rallying all China’s enemies against Chinese hegemonic behaviour is one and only Xi Jinping.

The USA’s Shameful Submission Before Qatar