As US leaves Taiwan, Australia comes to its rescue 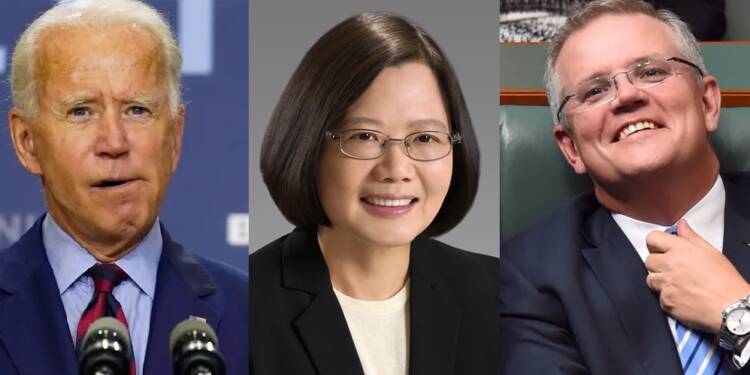 The way in which the US under Joe Biden is treating his allies is a travesty, even for his standards. And now at a time when the Chinese Communist Party is dangerously and consistently increasing its offensive against Taiwan, Joe Biden has for all practical purposes, given up on safeguarding the status quo. Taiwan has realised the severity of the situation and before things got entirely out of hand, Taiwan asked Australia for help. Although Joe Biden may not be willing to be a reliable leader, Australia under Scott Morrison has been abreast regarding the situation and as a show of its support, it warned China against ‘threat or use of force’ following air incursions.

China’s frequent incursions into Taiwan’s air defence zone have alarmed the Australian government, which has warned against “the threat or use of force.” Over four days, Taiwan claims Beijing flew roughly 150 fighter jets and bombers into its air defence zone, causing the US to label the incursions “provocative” and “destabilising.” Joseph Wu, Taiwan’s foreign minister, described the activity as “dangerous”. On Monday, the PLA Air Force launched a record-breaking 56 jets into Taiwan’s air defence zone. It came after a total of 16 on Sunday, a previous high of 39 on Saturday, and a total of 38 on Friday.

Taiwan’s China challenge may be nearer than most expect

These developments have forced Taiwan to be absolutely ready and on its toes for an invasion by China. As Beijing continues its military intimidation campaign, Taiwan’s Foreign Minister warns that his country is preparing for conflict with China and encourages Australia to strengthen intelligence sharing and security cooperation. Taiwan’s Foreign Minister Joseph Wu told ABC’s China Tonight that if the PLA launched an actual strike, his democratic state would be ready to repel it.

Also read: After Japan, Australia arms itself to the teeth to save Taiwan from a possible Chinese invasion

Mr Wu told ABC’s Stan Grant in an interview to be televised on Monday evening, “The defence of Taiwan is in our own hands, and we are completely dedicated to that.” “We will fight to the finish if China launches a war against Taiwan, and that is our promise.” If China launches an attack on Taiwan, I am confident that they will suffer greatly as well.”

China’s economic plight and Taiwan a tool to shift attention

It is always a better option for an authoritarian ruler to shift the public attention away from a problem rather than solving it. As China is facing unprecedented economic plight and Xi Jinping finds himself unable to address the issue, he may very well lead a full-scale invasion of Taiwan to shift public attention from his failure and get his name inscribed in history forever.

While the US steps back in this time of need, Australia has stepped up for Taiwan

As reported by Epoch Times, the Pentagon has recently determined that the U.S. might be defeated and certainly would suffer heavy losses of personnel and equipment, should the US forces come to the defence of Taiwan. The military experts in the US are also growing wary of the fact that the USA’s aircraft careers deployed in the region could also become an easy target for Chinese missiles fired from long distances.

Much hinges on the president’s political and moral courage. However, Washington’s tendency would most likely be to press Taiwan into a dialogue with China that would result in Taiwan becoming Chinese. In other words, ‘I’m giving up’. That would absolve the US of responsibility, but it would send a chilling message to our Asian allies that the sky was actually falling and that there was no hope or aid from the US. Appeasement will lead to world war in the end; it is impossible to believe that China will be content with simply swallowing Taiwan.

China’s frequent incursions into Taiwan’s air defence zone have alarmed the Australian government, which has warned against “the threat or use of force.” On Monday evening, the Australian government stepped in, proclaiming its desire for “an Indo-Pacific region that is secure, wealthy, and based on the rule of law.” In response to questioning from Guardian Australia, a representative for the Department of Foreign Affairs and Trade said, “Australia is worried about China’s increased air incursions into Taiwan’s air defence zone over the past week.”

The fact that it is the Indo-Pacific countries (except the US) that are resolutely standing with Taiwan, it goes on to show the lack of moral courage and responsibility of the US when it comes to standing with its allies in times of need. While Japan has been a long-standing supporter and has made its intentions clear, the words by Australia also signal a consolidated view among the democracies, minus Joe Biden’s USA.

Russia is all set to obliterate China’s Copper dreams