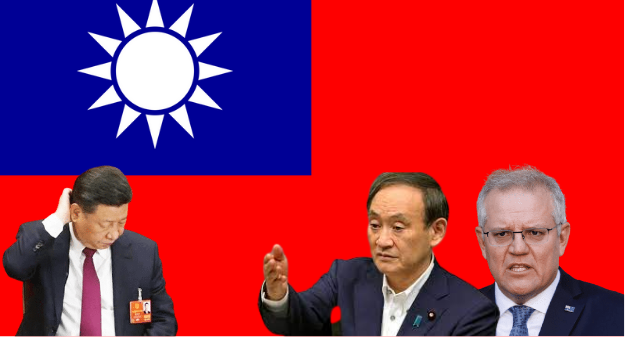 After Japan, it is the democratic nation of Australia that is emerging as a pallbearer of China’s coffin in the Indo Pacific. To be perfectly candid, Australia is arming itself up against China, not just to protect itself and its interests against Chinese aggression. Canberra is also preparing for a showdown with China when the red rogue country invades Taiwan, in an attempt to merge the island nation with the mainland. Australia will be joined by Japan in the protection of Taiwan, and also the United States – if Joe Biden gets out of office by then.

In the latest turn of events, Australia has realised that the Chinese threat is not a problem to be dealt with tomorrow. It requires the free world’s immediate attention, and therefore, Canberra has gone on a weapons shopping spree to arm itself against China’s wimpish military. This week, under the aegis of the AUKUS trilateral security agreement, Naval News reported that Australia is all set to procure the following from the United States:

Earlier on Wednesday, as reported by TFI, the US, UK and Australia announced a special security pact. The partnership, termed AUKUS, will provide Australia with advanced technologies including know-how for nuclear-powered submarines. After acquiring the advanced submarines under the AUKUS initiative, Australia will become just the seventh nation in the world to have such technology, only after the US, UK, France, China, India and Russia.

The AUKUS initiative shows that the US is willing to assist Australia in Canberra’s fierce conflict against China. Australia is only the second country after Britain with which the US has decided to share its nuclear propulsion technology.

A Significant Milestone for the Protection of Taiwan

The acquiring of new weapon systems, and nuclear-powered submarines by Australia has sent a chill down China’s spine. The Chinese Foreign Ministry sharply criticised the trilateral military partnership between Australia, the United States and the United Kingdom, saying it would closely monitor the pact that will gravely undermine regional stability and aggravate the arms race and hurt international non-proliferation efforts.

The truth is that China’s plans of ‘integrating’ Taiwan with itself have just suffered a major setback. Recently, Australia’s former Defence Minister Christopher Pyne warned that Australia will likely be dragged into a war with China in the next five to ten years. According to Pyne, the likely flashpoint will be Taiwan, which the former Australian Defence Minister described as the “most concerning of all” of China’s overt indications of aggression.

Read more: The democratic world readies Australia to lead the crusade against CCP’s tyranny in Indo-Pacific

Now, the acquisition of lethal weapons by Canberra reinforces beliefs in Beijing that Australia is preparing itself for a conflict with China on the issue of Taiwan’s independence.

So far, it was Japan alone that was actively preparing to confront China on the issue of Taiwan. Now, however, Australia has joined the league. It will be simply impossible for China to win a war against the combined might of Japan, Australia and the United States.

In what adds to China’s many injuries, the U.S. and Australia have also mentioned Taiwan in the joint statement, after the ministerial-level talks between the two countries. The statement said, “The United States and Australia reiterated continued support for a peaceful resolution of cross-Strait issues without resorting to threats or coercion.” It added, “The Secretaries and Ministers re-emphasised Taiwan’s important role in the Indo-Pacific region.

Both sides stated their intent to strengthen ties with Taiwan, which is a leading democracy and a critical partner for both countries.”

China now realises that the good times for it are over. The world, led by Japan, Australia and the US is committing to Taiwan’s security, and with every passing day, China’s dreams of invading Taiwan are taking a big hit.