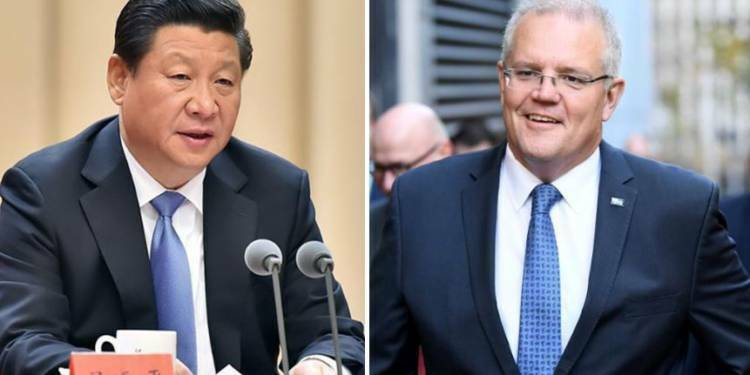 China has finally come to terms with the fact that it is not all that mighty which it has believed itself to be. After having waged a failed economic and trade war against Australia, the Communist nation of China is back to begging for a seat on the Comprehensive and Progressive Agreement for Trans-Pacific Partnership, and Canberra holds the key to Beijing’s fortunes now. China stands isolated today. The only negotiations it is having are with countries who owe it money but do not have the means to pay back. The world simply reposes no trust in China, and domestically, the red rogue country is seething with a colourful variety of problems which range from a disgruntled populace to a shaky economy and a hostile environment for businesses.

To improve its geopolitical standing, China now desperately wants to be part of regional economic blocs which matter. In line with the same, China is lobbying the Australian government for its support to join a multilateral regional trade pact called the Comprehensive and Progressive Agreement for Trans-Pacific Partnership or the CPTPP. The CPTPP is an 11-nation trade agreement among Australia, Brunei, Canada, Chile, Japan, Malaysia, Mexico, New Zealand, Peru, Singapore, and Vietnam.

According to a report by Bloomberg, China has this year reached out to Australia, Malaysia, New Zealand and possibly other nations for technical talks on details of the CPTPP. Beijing’s embassy in Canberra has said, “China’s accession to the CPTPP would yield large economic benefits.” China also said, “China is committed to building a community with a shared future for mankind, and stands ready to work together with all the other parties to promote globalization and regional economic integration.”

But here is where things get very interesting and funny. China, which has been waging a trade war against Australia for over 15 months now, has been forced to talk to Canberra in a sweet manner. It is making overtures for Australia. The Chinese embassy in Canberra said, “The Chinese economy and the Australian economy are highly complementary with enormous potential in cooperation.” Referring to the bilateral free-trade deal in force between the two countries, China described it as marking “a milestone for our trade and economic cooperation, creating favorable conditions for deepening, broadening and improving our bilateral economic relationship.”

China seems to be suggesting that if Australia were to support its bid for joining the CPTPP, it will roll back on the trade tariffs and bans that it has imposed on Canberra. However, this is not really an incentive for Australia. As it turns out, the Australian economy has emerged very resilient in the face of Chinese aggression. Australian Treasurer Josh Frydenberg on Monday said the Chinese government has failed to seriously impact the country’s economy through a series of punitive measures on exports.

Additionally, China’s iron ore imports hit new heights in August even as the CCP desperately tried to cut steel production and fidget with commodity prices, resulting in an obvious hike in Australia’s exports of the ore. Australia’s economy is, therefore, performing very well even while China tries all in its power to hurt it. Now that Beijing is begging Australia to allow it an entry into the CPTPP in exchange for an easing of the trade war, the Scot Morrison government will, rest assured, sit back and laugh at the hilarity of it all.

China’s rival, Japan, meanwhile, is on another league altogether. Japan is rubbing salt on China’s wounds by signalling that it may support Taiwan’s bid to enter the 11-member trade bloc which Beijing so desperately wants to be made a part of. As reported by TFI, lawmakers from Japan’s ruling Liberal Democratic Party held first-of-their-kind security talks with Taiwan’s ruling Democratic Progressive Party lawmakers last month.

Read more: Japan blocked China’s entry from the TPP, now it is facilitating Taiwan’s entry for the same

Taiwan’s thriving semiconductor industry occupies a pivotal position in the global electronics industry and therefore Japan wants to bring the island nation into a trade bloc that excludes China. On one hand, Japan is not letting China join CPTPP and on the other hand, it is promoting Taiwan’s entry into the trade group. This is a part of Tokyo’s strategy to isolate China and mainstream Taiwan in the global supply chains.

China has bent the knee for Australia after over a year of waging an inconsequential trade war on Canberra. Now, Beijing has been left red-faced. Australia, meanwhile, is enjoying the clownish show being put up by Xi Jinping.