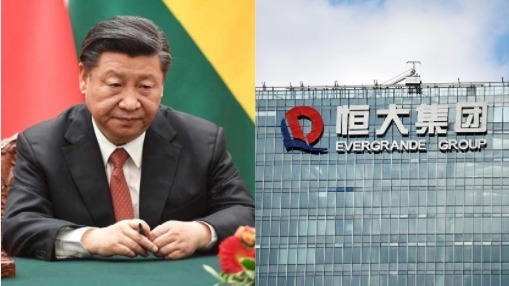 Evergrande Group, China’s second-largest property developer really captures the sudden downfall of the Chinese economy. In 2018, Evergrande became the world’s most valuable real estate brand. Its brand value surged to $16.2 billion. However, Evergrande has now witnessed a shocking downfall. Its credit-rating has been downgraded by two rating agencies triggering fears of default by the real estate giant.

Evergrande is too big a company. If it defaults, then it could be the final blow for China’s highly strained economy. Evergrande’s dipping fortunes could hit China’s real estate market ultimately affecting everything from the jobs market to property prices. This is why Fitch Ratings and Moody’s Investors Service seem to have issued warning signs about the likelihood of a default by the Evergrande Group.

Why has Evergrande fallen into trouble

Fitch stated, “The downgrade reflects our view that a default of some kind appears probable.” The credit ratings agency added, “We believe credit risk is high given tight liquidity, declining contracted sales, pressure to address delayed payments to suppliers and contractors, and limited progress on asset disposals.”

Earlier, Moody’s Investors Service had cut Evergrande’s rating to Ca, which suggests that it is “likely in or very near default.”

Evergrande itself issued a warning last week. The property developer suggested that there would be risks of default if it failed to raise cash.

The overall situation is also going downhill for Evergrande. The real estate developer had managed to establish its huge empire with heavy borrowings and land grabs. Last year, it managed to avert a debt crisis with help from the government and wealthy friends. However, Chinese authorities imposed rules known as the three red lines to determine whether companies can take additional borrowings. After the new rules were imposed, Evergrande again fell into trouble.

Evergrande hasn’t sold a dollar bond since January 2020 and its shares have reached a nadir, briefly trading below their 2009 initial public offering price.

Effects on the Chinese economy

To put it simply, Evergrande’s likely default will be the final nail in the coffin for China’s troubled economy. With over $300 billion of liabilities, any default by Evergrande would inevitably harm lenders, suppliers, small businesses, and millions of homebuyers.

In fact, the overall sentiment in the Chinese economy would dip further if Evergrande collapses. The fundamentals of the Chinese economy are already weak with President Xi Jinping’s tight regulatory measures and crackdowns on tech and EduTech sectors causing an absolute carnage in the stock market. A default by the world’s biggest real estate developer by value is therefore the last thing Chinese stock traders and investors would want.

In fact, Evergrande being a gigantic real estate company would imperil the interests of many Chinese and foreign investors. Therefore, any debt default by the real estate giant would completely erode investor confidence in the Chinese economy.

The Xi Jinping administration hasn’t said anything about Evergrande’s dwindling fortunes. The Chinese authorities are in a catch-22 situation. If Evergrande defaults, then the entire Chinese economy will get affected profoundly. However, bailing out such a huge realtor wouldn’t be an easy task for Beijing.

Also, the risks involved with bailing out Evergrande are simply too high. If Xi decides to help Evergrande avoid default, then it might send a wrong signal to Chinese businesses that consider themselves “too big to fail”. Such businesses could start taking excessive risks because the government would them anyway if they run into trouble. Xi is facing a conundrum that invariably gets attached to the collapse of corporate giants.

China’s debt crisis has been haunting it for quite some time. The Kingold scam that surfaced last year showed how 4 per cent of the Communist nation’s gold reserves were fake.

China’s largest privately-owned gold processing and jewellery company had taken a loan of over 2.8 billion dollars with pure gold as collateral. However, the 83 tons of gold that the company claimed as pure gold was in fact gilded copper. Such incidents show just how deep China’s gross economic mismanagement and concoctions are.

Meanwhile, a debt crisis looms large on the Chinese economy as many of its leading private firms, State-owned enterprises and regional banks are defaulting frequently.

China’s troubles are, in fact, not limited to big corporate giants. The Communist nation is also facing a microlending sector crisis. Fintech companies have been especially addictive for Chinese youth. These companies are often built seamlessly into e-commerce platforms or even get associated with other services like rental platforms. So, very often Chinese citizens borrowing more than they can repay.

China’s debt crisis was already going out of its control with defaults across its financial sector. However, it seems that trouble is going to mount further for Beijing and any default by Evergrande would inevitably slip the Chinese economy into recession.