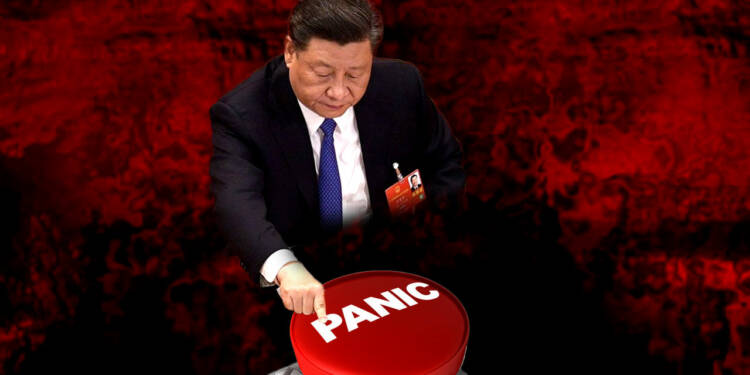 As the Chinese market tumbles, President Xi Jinping has suddenly woken up to the harsh economic realities facing his country. And he has pressed the panic button. And we see Chinese authorities led by Xi Jinping take some specific actions to revive the Chinese economy and the stock market.

With the benefit of hindsight, it is Xi himself who has landed China in a desperate position with his own actions like:

With India’s stock market emerging as the best-performing one across all major stock markets in the world, China is losing foreign portfolio investors to India. Now, Chinese financial authorities are realising how things are going South for them. So, they are doing what they do best- blame the United States of America.

Fang Xinghai, deputy chairman of the China Securities Regulatory Commission (CSRC), called for enhanced monitoring of cross-border money flows to stabilise the capital markets. He said, “It is normal for some foreign investors to relocate their assets considering the changes to international monetary policies. This won’t lead to big inflows or outflows.”

Fang added, “However, we must prevent some foreign-funded institutions from facilitating market changes with their investment decisions. This is where we must pay particular attention.”

Xi is trying to mitigate the negative investor sentiment and Chinese stock market troubles triggered by his tight regulatory measures and crackdowns on big enterprises. In order to do so, he has tried to make a big bang announcement- plans to set up a third stock exchange in the Chinese mainland.

Speaking at the China International Fair for Trade in Services last week, Xi also claimed that the establishment of free trade zones in China could help the global economic recovery. This is a part of Xi’s attempts to placate the wounded foreign investor sentiment, following the rise in China’s hawkish behaviour.

The Chinese President said, “Service trade is an important area for international economic and trade cooperation. It plays an important role in [China’s] new development strategy.”

While Xi did not explain the purpose of a third stock exchange, the China Securities Regulatory Commission has clarified that it would be “inclusive” and “targeted”, and will serve innovative small and medium-sized enterprises.

So, Xi’s strategy is clear- big corporate giants have been hit hard by crackdowns and therefore smaller enterprises are to be encouraged. He wants to keep imposing tight regulatory measures while improving the Chinese stock market sentiment with the aid of smaller enterprises.

The ongoing carnage in the Chinese stock market and growing disenchantment can be traced back to Xi’s brainless crackdowns on the tech sector. So, Beijing is trying to reassure the tech sector now.

On Monday, both Chinese President Xi Jinping and his top economic adviser, Vice-Premier Liu He, tried to reassure China’s private tech companies. Liu said, “There are no changes in the principles and policies for supporting the development of the private economy; they have not changed now and will not change in the future.”

Chinese President Xi Jinping signalled support for the tech sector by sending a congratulatory letter to the International Research Centre of Sustainable Development for Big Data. The letter appreciated the tech and innovation organisation, which launched a forum on big data and sustainable development goals on Monday.

Chinese President Xi Jinping has devastated China’s economy and the Chinese stock market is tumbling uncontrollably as a reaction to his brainless crackdowns and other bizarre regulatory policies. Now, he is seemingly trying to mitigate the ominous crisis facing the Chinese economy with some big bang moves that make more noise but carry less substance.