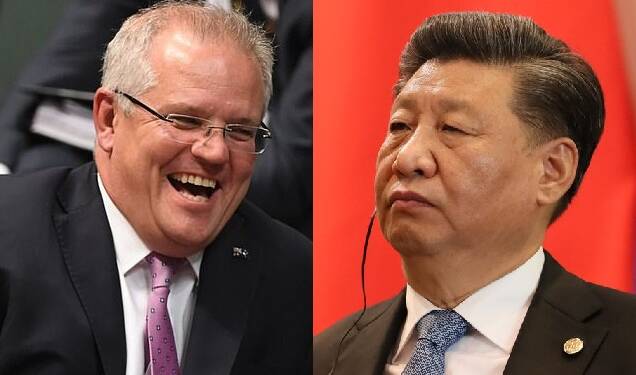 The US, UK and Australia announced a special security pact on Wednesday, that was welcomed by Joe Biden, Boris Johnson and Scott Morrison during their virtual summit. The partnership, termed AUKUS, will provide Australia with advanced technologies including know-how for nuclear-powered submarines. After acquiring the advanced submarines under the AUKUS initiative, Australia will become just the seventh nation in the world to have such technology, only after the US, UK, France, China, India and Russia. Moreover, the triad will also share crucial information in areas including artificial intelligence, cyber and underwater defense capabilities.

The AUKUS initiative shows that the US is willing to assist Australia in Canberra’s fierce conflict against China. Australia is only the second country after Britain with which the US has decided to share the nuclear propulsion technology. The fact that the US has announced the pact in the backdrop of the Afghan crisis illustrates Biden’s eagerness to reinforce his commitment in the Indo-Pacific region. On the other hand, the UK wants to materialize its ‘Global Britain’ ambitions by not squandering any chance of engagement with the Indo-Pacific partners.

The nuclear-powered and not nuclear-armed submarines will considerably boost Australia’s underwater warfare capabilities. The development is bound to raise the temperature in Beijing, which views Australia as a potent threat against its expansionist geopolitical ambitions in the Indo-Pacific region. China has already condemned the agreement as “extremely irresponsible”. Chinese foreign ministry spokesman Zhao Lijian said the AUKUS arrangement “seriously undermines regional peace and stability and intensifies the arms race.”

Message from the triad: Australia is set to lead crusade against China

The message that the three countries want to send to the world, and especially China, is abundantly clear; Australia is set to lead the democratic world’s crusade against the CCP’s tyranny. Australia has displayed sheer courage and boldness in standing up against Chinese coercive conduct over the past year. Australia became the first country to block China’s Huawei‘s operations in the country on ‘national security’ grounds that even encouraged like-minded countries to follow the suit. Moreover, Canberra did not only push vigorously for an open and transparent investigation into Covid-19 origins but also hammer Xi Jinping’s highly ambitious Belt and Road Initiative Project by vetoing the China-funded infrastructure deals reached by the state of Victoria.

Australia has the political will to play the spoilsport in China’s ambitions of usurping Taiwan and the South China Sea. Despite being heavily dependent on its trade with China, Australia has never shied away from calling out Beijing’s oppressive trade practices and belligerent foreign policy. In May, China realized that Australia could prove to be the biggest obstacle in realizing its Taiwan unification dreams after Scott Morrison administration signaled his intent to defend Taiwan in any event of China’s aggression against the democratic island nation.

The China Challenge has stirred the regional security dynamics in epic proportions. Australia’s overt opposition to China’s belligerence has ramped up the security challenges. Australia’s former Defence Minister Christopher Pyne recently warned that Australia will likely be dragged into a war with China in the next five to ten years. According to Pyne, the likely flashpoint will be Taiwan, which the former Australian Defence Minister described as the “most concerning of all” of China’s overt indications of aggression.

Pyne’s comments irritated the Chinese establishment to such an extent that the state media had to call upon the Chinese government to launch a nuclear attack against Canberra should it decides to defend Taiwan against Chinese aggression. The increased security threats have prompted Australia to rush to like-minded countries for strengthening its defense apparatus.

Read More: With Chinese belligerence at its peak, it’s time for Australia to go nuclear

For instance, France is reportedly engaged in talks with Australia to reach an arrangement that will allow French warships and troops to easily access Australian Naval bases and military sites. A spokesperson for the French embassy in Canberra recently said the region was witnessing “profound strategic changes” and France “as a fully-fledged Indo-Pacific country, seeks to maintain an area that is open and inclusive, free of all forms of coercion and founded on multilateralism and the respect of international law”.

Read More: Australia will give its bases to French warships to take care of Chinese aggression in the Indo-Pacific

Last month, Japan’s ambassador to Australia had expressed hopes of increased defense cooperation between Tokyo and Canberra, saying that the two nations must work together to prevent the Indo-Pacific becoming “a lawless jungle.” Ambassador Shingo Yamagami had signaled an increase in joint military training, stating that greater interoperability between the Self-Defense Forces and Australia’s military is prominent because “at the time of contingencies, we have to work closely together.”

With Xi Jinping’s anxiety growing by leaps and bounds over his fragile sway over the country, Taiwan faces an imminent danger of getting usurped by China. The defense of Taiwan is an issue bestowed with utmost regard by Australia. Australia has successfully steered its anti-China campaign without letting Beijing harm its economic interests by and large. Now with reinforced support from the UK and the US, Australia is all set to assume charge of the democratic world’s crusade against China.