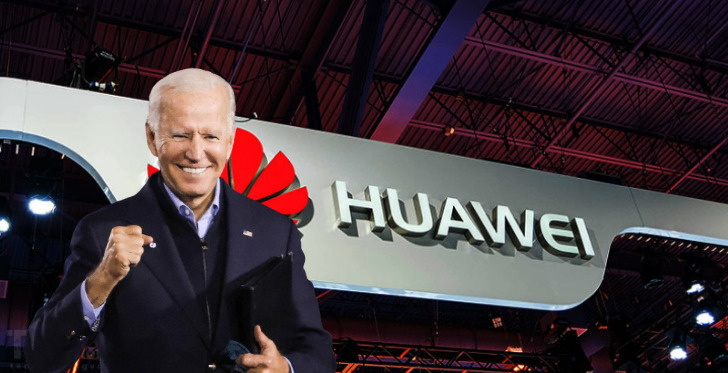 U.S. President Joe Biden – the liberal mascot, the committed climate lover and the quintessential Democrat is secretly fuelling the rise of Huawei. Been a while since you heard that name, right? “Huawei”. It was in the news on a daily basis for as long as Donald Trump was President. Now, its name appears on the news cycles once in a blue moon, and much of it has to do with the Biden administration trying to evade the task of running Huawei completely to the ground not just in the United States, but across the length and breadth of the world like Trump would have, had he been allowed to serve as President.

On Thursday, Joe Biden signed legislation to prevent companies like Huawei Technologies Co. and ZTE Corp, which are deemed security threats, from receiving new equipment licenses from U.S. regulators. The new law requires the Federal Communications Commission (FCC) to no longer review or approve any authorization application for equipment that poses an unacceptable risk to national security. Your first reactions might be the following: “Wow!”; “That’s Great!”; “Didn’t expect Biden to grow a pair to do that!”; “Commendable” and so on and so forth.

Well, we hate to break it to you, but it’s all a charade. Joe Biden is pretending to inhibit the growth, and perhaps, even entry of Huawei into the United States, but around the world, Washington is giving the nefarious Chinese tech giant a very long leash. Huawei has been let loose. Donald Trump held it by the throat, but Biden has completely abandoned the task of countering Huawei at a global scale, and the effects of it are beginning to show already.

According to Foreign Affairs, Huawei is pivoting from network equipment and phones to cloud computing, e-government services, and other products that are less dependent on advanced semiconductors. Meanwhile, Huawei is continuing to market its technology aggressively in the developing world, where it has been widely embraced.

Government servers in Ethiopia, surveillance cameras in Pakistan, and a data centre in Papua New Guinea; Huawei is expanding into territories where Western telecommunication and tech hegemons have not really wandered. So, Huawei is entering developing, low-income countries, and outright client state nations like Pakistan to keep its head above water for now. In the future, however, if this approach of Huawei is not countered by the United States, it could spell doom for global democracy and freedoms as we know them.

Particularly charming for the developing world is the high-tech, suave, snoopy yet cheap “smart city” package offered by Huawei. The company offers temperature-sensing cameras to identify people with fevers, facial recognition software to find wanted criminals, and analytics to alert the police to unusual behaviour. By measuring traffic flows and enforcing driving laws, Huawei promises that its technology will help improve congestion. What has the Biden administration done so far to counter such pitches by Huawei to poor and susceptible nations? Zilch. It is as if Biden is oblivious to the resurgence of Huawei, or is rather aiding it.

It is Time to Act Now

The Biden administration needs to get its act straight right away. With every passing day, Huawei is diversifying its portfolio. It is recovering from the back-to-back assaults of Donald Trump. Any sane U.S. President who succeeded Trump would have not just ensured that the 45th president’s efforts to tame Huawei are continued, but would have sharpened the attacks on the Chinese telecom giant. Biden, however, is too romantically invested with Xi Jinping, which has ended up blurring the man’s vision.

Biden needs to begin an anti-Huawei campaign immediately. Donald Trump’s fight against the CCP’s espionage campaign needs to be taken forward. China is increasing its footprint across developing countries, and Washington would be foolish to not intervene right away.